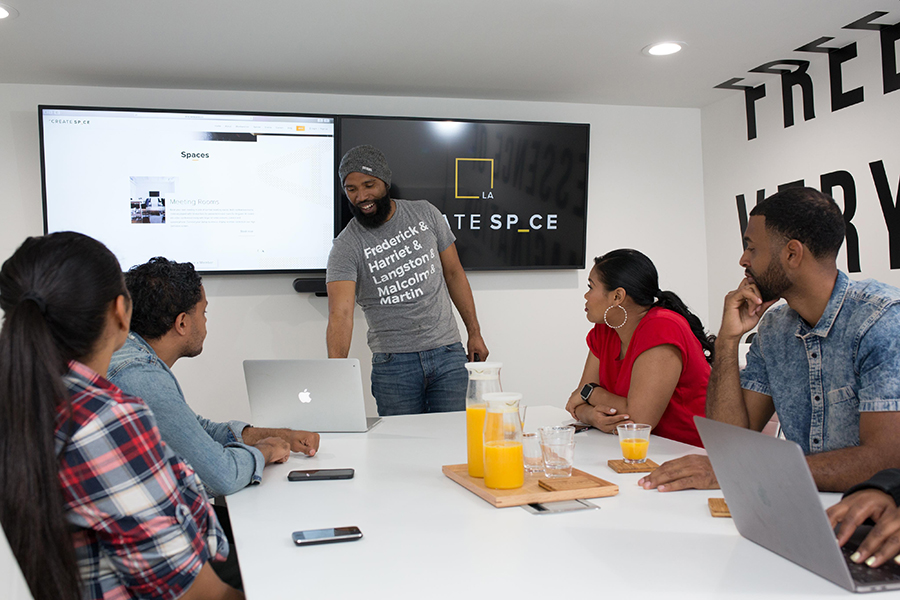 The Watts native has opened LA Create Space, a co-working space in Inglewood which features an audio and video production studio.

LA Create Space is a beautiful co-working space in the heart of Inglewood.  It has a simple stripped-down aesthetic that gives the impression of never being too busy or too filled.  The walls are covered in eye-popping colors contrasted by stark whites, which when combined with artwork produced by local artists, the whole place has an avant-garde type of feel.  It all combines to foster a comfortable and relaxing vibe, a place to think, chill, and create.  And the people are friendly and helpful too.

Johnson has put everything he’s learned over the last 15 years as an audio-visual specialist into what’s within the walls of LA Create Space.  He will tell you how rewarding and challenging his day job as Senior Video Collaboration Engineer at Facebook is, but let you know that LA Create Space is more than just a passion project he does on the side.

“Our mission is to promote a productive and inspiring environment where innovation, creativity, and originality bring together community,” he said.

He has succeeded in doing that.  What Johnson has created, along with his wife and partner Marisa, is the first of its kind in Inglewood.  LA Create Space is a membership-based co-working community, and the location holds a private office, conference and meeting rooms, and a lounge for more casual meetings, all with full cutting-edge audio and visual connections.

The true gem of the location is that it holds a full multimedia production studio, meaning it has the capability to do full audio-video recording and post production, providing 4K workstations and full audio, graphics, and sound editing software.  All manner of projects can be realized from inception to completion here, using the 1,000-square foot loft space which has ample space for lights, stands, multiple backdrop options; truly anything a media creator might need.

LA Create Space is a true marvel technologically, but Johnson will be the first to tell you that without his wife the vision wouldn’t have been realized.

“We really wanted to create a space where people would feel comfortable coming in to meet, connect and collaborate,” Johnson said.  “It’s a big part of what we’re trying to build.”

The feel of the space plays a primary role in that, and that’s where Marisa comes in.  She’s the marketing and branding expert who, using her knowledge working on brands such Beats by Dre and Apple, has created the unique feel that sets LA Create Space apart.

“People here don’t necessarily have access to a studio,” Johnson said.  “They may want to create, but they don’t have a place to go and do it.  Or they may have all the gear and it’s sitting in their living room.  Why go invest in all this equipment and spend all this money, which is the road I took, and goes back to why I wanted to build this space, because I knew there were people out there like me.”

LA Create Space is more than just a co-working space, as Johnson said that it’s a community.

“People are here to help each other; it’s about allowing people to utilize resources so we can learn from each other,” he said.

It’s why the aesthetic is just as important as the technology that is the bones of the place.  It’s a space where people can come to use the equipment, or take classes to learn how to do what they want, or even enlist Johnson and his team to help build out their ideas.

Johnson grew up in the Imperial Courts Housing Projects in Watts, popularized in movies and music videos for when producers and directors wanted street authenticity.  Growing up in that environment was all too real though, and he saw quickly the mistakes that led most down roads he knew he didn’t want to walk.  He found his way out through education and sports, ending up at San Jose State University on a football scholarship, where he earned a degree in Radio, Television, and Film.  It was there that put him on the path to LA Create Space, though he didn’t quite know it yet.  San Jose State University is in close proximity to Silicon Valley, and by being friendly and smart, he was able to get himself exposed to what would become his path.

“I got into tech as my side hustle,” he said.  “I went to school for film, not tech.  The impetus for change was seeing how much these guys were making.  I was already working as a broadcast engineer for different types of sports broadcasting, and I was like, ‘let me go do this AV stuff so I can make some money to buy the cameras and equipment I need to shoot music videos for my homies.’”

That AV stuff was doing 10-thousand people conventions for the likes of Cisco and other Silicon Valley companies, and while not a studio broadcast, Johnson found that the skills needed were the same and transferred over easily.  That first year out of college he made more money than he’d ever seen in his life, $85,000, but realized he wasn’t making as much as the overseeing engineer and he was basically doing the guy’s job.

“The only difference was that he had the certifications,” Johnson said.

He quickly remedied that.  More important than the money was the exposure to the ideas and technology that would make his future.  Johnson was inspired by John Chambers, the CEO of Cisco at the time, and his ideas on the Internet of Things, the concept of everything being connected to the Internet.

Cisco was doing a lot around networking and conferencing, and had acquired a company called Web-X.  There was little knowledge and skill surrounding the new acquisition within Cisco, and it gave Johnson the chance to really get his feet wet on the ground level in the new field of unified communications.

Johnson was there at the beginning, and now 15 years in he maintains the largest video conferencing infrastructure in the world at Facebook and was the architect on their design which has continued to grow and scale.  And everything he’s learned; he’s put into LA Create Space.

The future is bright for Johnson and LA Create Space.

“Technology is going to change the nature of work,” he said.  “Work will not necessarily be somewhere that you go, but more something that you do,”

Johnson plans on LA Create Space being there as a facilitating tool as the work dynamic changes to a service industry and an independent contractor focus.  The future, Johnson says, “is about making sure you’re able to build things and bring people together.”

Find out more about LA Create Space at www.lacreatespace.com, and follow them on social media.