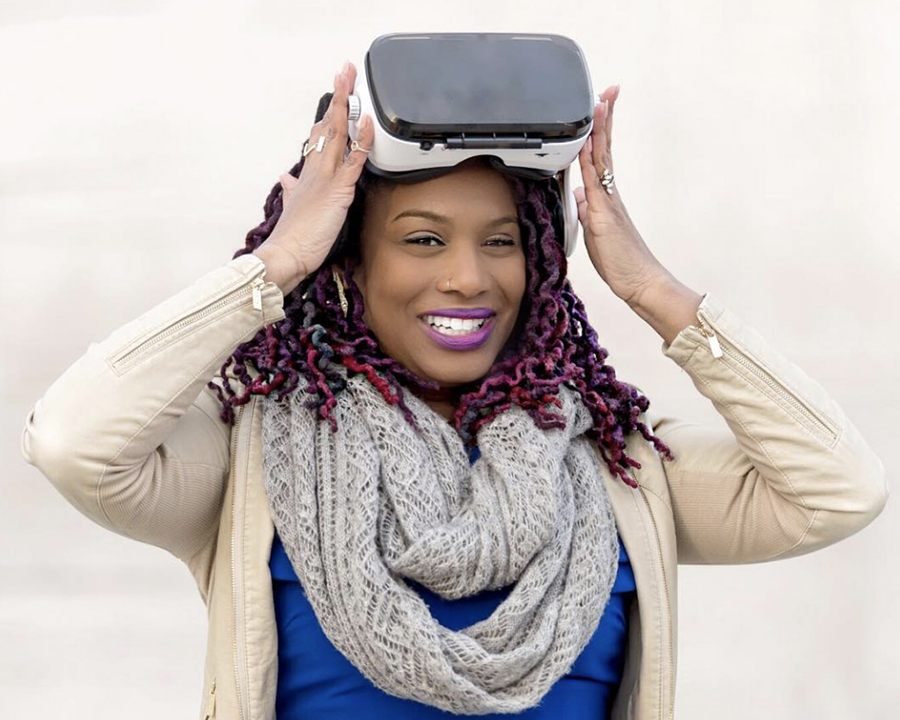 Frazier is bringing virtual reality technology into classrooms to give students a more effective learning experience.

Kai Frazier is an educator with a love of history who found herself working for the United States Holocaust Memorial Museum in Washington, D.C., crafting stories.  She was responsible for recording the verbal histories of genocide survivors from around the world, and telling their stories in a way to spark action.  No matter if they were Syrian, Rwandan, or ISIS survivors, they all had the same advice for Frazier: “Live, take risks, you’re not promised tomorrow.”  After hearing so many inspiring and heartbreaking tales, she did.  Frazier sold her house and belongings and moved to Silicon Valley to start a tech company.

Frazier is the Founder and CEO of KaiXR, an educational platform where kids use virtual reality (VR) to explore the world around them through virtual field trips, and once interest is cultivated, they can learn the skills to create their own virtual spaces using this in-demand tech.  This approach provides measurable benefits, with studies showing 95 percent of children who go on field trips are more likely to graduate.  With field trips being canceled due to COVID-19 it’s more important than ever.  Also, the U.S. is facing a 50 percent shortage in tech graduates by the year 2024, so Frazier feels it’s critical now to get kids involved in order to have viable opportunities in the upcoming digital future.

The genesis of the idea that would become KaiXR was rooted in Frazier’s own educational experience.  As a young teen, Frazier experienced turmoil at home, even being homeless for a time during high school.  She credits her teachers who took the time and really helped her to pull through and graduate, inspiring her to become a teacher herself.

“When you’ve been shown grace like that, you have to pay it forward, so I became a teacher,” she said.

Frazier received a degree in History from Virginia Commonwealth University and started teaching in the Washington, D.C. area, in low-income and under-resourced communities made up of children who were just like she had been.  It was a frustrating experience for her because they never had enough resources for anything, much less field trips.  Though most museums were free due to federal funding, these schools couldn’t afford buses to get the children there despite being only 30 minutes away.  Getting permission slips signed were an issue also.

“The kids who really needed to see these things usually had behavioral issues and couldn’t go,” she said.  “So, it was a very narrow percentage of kids who were even able to go on field trips.  If we know that they’re 95 percent more likely to graduate (if they go on field trips) but it’s the underserved kids that end up not getting these opportunities, it’s a systemic issue.”

Another frustrating issue in the schools was the lack of technology.

“We had a laptop cart that came around once a week,” Frazier said.  “When it did, hopefully they were charged, usually they were missing buttons, and there were never enough.”

On top of that, there was a lack of diversity in the selections offered through tech to the children.  This was frustrating as they were unable to see themselves in the story, prompting a lack of connection in seeing themselves as being able to “do this too.”  Through all this though, the kids had smart phones, which Frazier came to realize was a computer in their pockets.  But smartphones were taboo in the classroom; seen as a distraction and the children were always told to be put them away.  Frazier believed that if they could make better use of the smartphone/computer the children already had, they could make some big differences.  But there was no emphasis at the time for teachers to learn how to teach with smartphones.

Frazier left teaching to work at history museums on the National Mall in Washington, D.C. at the U.S. Holocaust Memorial Museum and the U.S. National Museum of African American History and Culture, where she first encountered VR.  The VR they worked with was more about delivering that experience inside of the museum.

“Put on the headset, see what it feels like to be a Syrian refugee,” Frazier said.  “But nothing like that was taking the museum back outside to the schools.  They kept saying, ‘We want to engage new audiences,’ but it took me a while to realize that meant engaging the donor’s kids and grandkids, and bringing the money in.  No one really cared about true access.

“So that was my idea.  How can we film diverse museum exhibitions in a way that would help students and bring it back to them using mobile VR and their cell phones.”

Frazier talked to others about what they wanted to see in VR, and used that feedback to create a diverse catalogue of VR field trips that are accessible, web based, and no apps are needed.

“It works on any device, even on a desktop you can watch a 360 experience,” she said.

These facts are important as often VR content is specific to a particular headset like an Oculus Quest or HTC Vibe, otherwise you can’t see it, making the experiences prohibitive.

Not only was making diverse content available on any platform important, but lowering the price to entry was a big barrier to overcome also, as headsets can cost upwards of $500 apiece.  Frazier found a little used option created by Google, that enabled a VR headset to be made out of cardboard in conjunction with a cell phone, making the cost minimal and conferring other benefits too.

“These Silicon Valley people are not teachers,” Frazier said.  “They don’t understand that a lot of kids want to make the cardboard.  The cardboard itself comes flat, so that the kids have to build it out, which is a really overlooked part of STEAM and STEM, putting things together, engineering.  A lot of tech people want to get straight to the tech, but these are all critical thinking steps that go into the way kids learn.

Children who learn new information using VR usually have a 90 percent comprehension rate the first time they get it compared to 40 percent with pencil and paper.  Frazier was able to get a teacher’s wishlist of things using this approach.  Children were excited to learn; they started asking good questions; they were more empathetic about the things they were learning, and there wasn’t a lot of extra steps to get these results, providing a huge return on investment.

Frazier has some practical words of advice for anyone wanting to get started as a tech entrepreneur.

“You have to start where you are, start with what you have, and start with what you know,” she said.  “But you have to start.  A lot of it is just, can you start?  Yes, this is hard, but you know what was harder?  Slavery.  It seems so simple but it’s one of the hardest things I try to get people to understand.  You have everything you need right now.  The only thing they have is money.  No ideas, creativity, any of this stuff.  They need you and will try to exploit you to make their recipe.”

Frazier sees VR as in the infancy of what it will one day become, and believes it will revolutionize teaching.
“When I talk to people about virtual reality, they say, ‘Oh, you can see new worlds in VR!’  I’m like, ‘How about the regular world we couldn’t see already?’” Frazier said.  “I want to see practical applications; how can VR be used as a solution to open up worlds for people that they have typically been denied access to.”
If you would like to support or get involved with Kai Frazier and her mission, visit www.KaiXR.com, and follow KaiXR on social media.