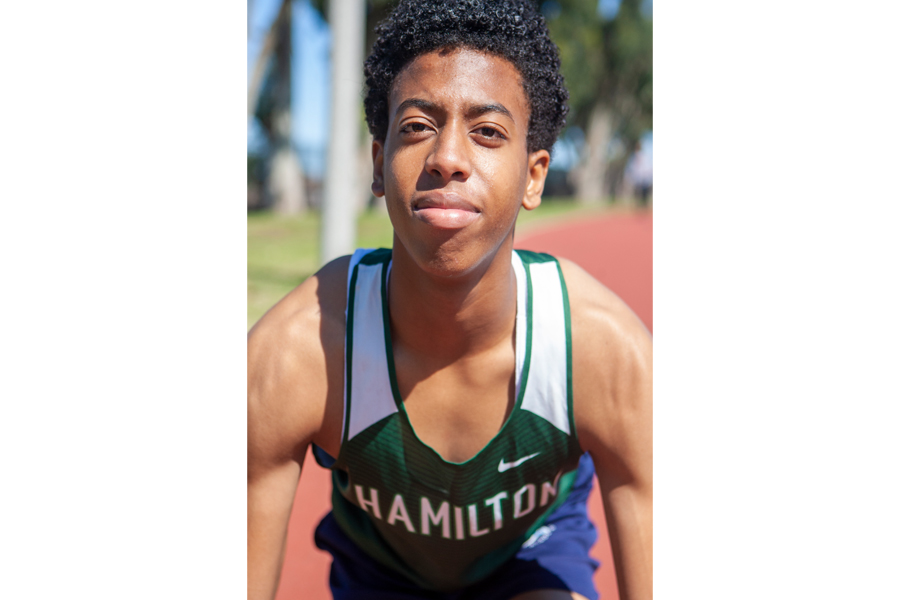 Jaylen Durham is one of the top hurdlers in the CIF Los Angeles City Section. Photos by Jason Lewis

Durham is a hurdler on the track team, and he participates in gymnastics and dance while carrying a 3.9 GPA.

Hamilton High School sophomore Jaylen Durham fills up the majority of his time with athletics and academics.  He is a star hurdler on his school’s track team; he has participated in gymnastics and he taught himself how to perform flips; and he is now learning hip hop dance.  He’s done all that while earning a 3.9 grade point average, which should go above 4.0 this year because he’s now taking AP classes.

Durham started running track when he was in elementary school, and he’s following in his mother’s footsteps.  Alicia Ross was also a star track athlete at Hamilton High School and West Los Angeles College.  She ran hurdles, just like her son is doing now.

Ross is the founder of Track Diamond Track Club, where she’s help guide several youth athletes to the Junior Olympics, including her son.  Developing Durham at an early age has led to a lot of success early in his high school career.

“He’s more advanced than kids his age,” Ross said.  “As a ninth grader, he was competing with all the seniors and beating many of them.  Coming into his 10th grade year, he’s made a lot of seniors and juniors mad.”

Durham ran on the varsity team his freshman year, and he made the CIF City Section finals in both hurdle events.  He also qualified for the CIF State Championship track meet.

While competing in track from an early age has helped Durham tremendously, trying out other sports and physical activities has contributed to his success.  Gymnasts are some of the strongest athletes in sports, and the leaping and bounding that they do can translate to sprinting on the track.

“Gymnastics helps with my flexibility and it helps give me more power,” he said.

Flexibility is extremely important for a hurdler, so training for gymnastics at the JAG Gym and Los Angeles School of Gymnastics, both in Culver City, has been extremely helpful.

Durham recently started taking a hip hop dance class at Hamilton High School, and he watches YouTube videos to learn new moves.  In one form or another, he is participating in all three of these activities on a daily basis.

Durham is so determined to succeed that he holds his coaches to high standards.

“He pushes us to the limit so that he can get to where he needs to be,” Ross said.  “The issue that I have with him is that he doesn’t know when to rest.”

Durham plans on running track in college, and he’s already made a list of the universities that he’d like to attend.  They include USC, Texas, LSU, and Oregon.  With an extremely high GPA, he won’t have to worry about the academic part of earning an athletic scholarship.

Preparation is one of the keys to Durham’s academic success.

“It’s all about organization,” he said.  “If you’re organized and you do your homework, and study for the test, you should get good grades.”

Durham separates his school work by subject, and he can easily locate his study material.  He also recommends that students talk to their teachers and ask questions when they do not understand something.  He wants to major in sports medicine when he gets to college, and he’s currently excelling in biology.  Next year he’ll be taking AP chemistry.

Outside of school, Durham volunteers with the American Red Cross Club, where he has participated in events to serve less fortunate people.

For more information about the Track Diamond Track Club, visit www.trackdiamondtrackclubs.com, or call (310) 405-3616.