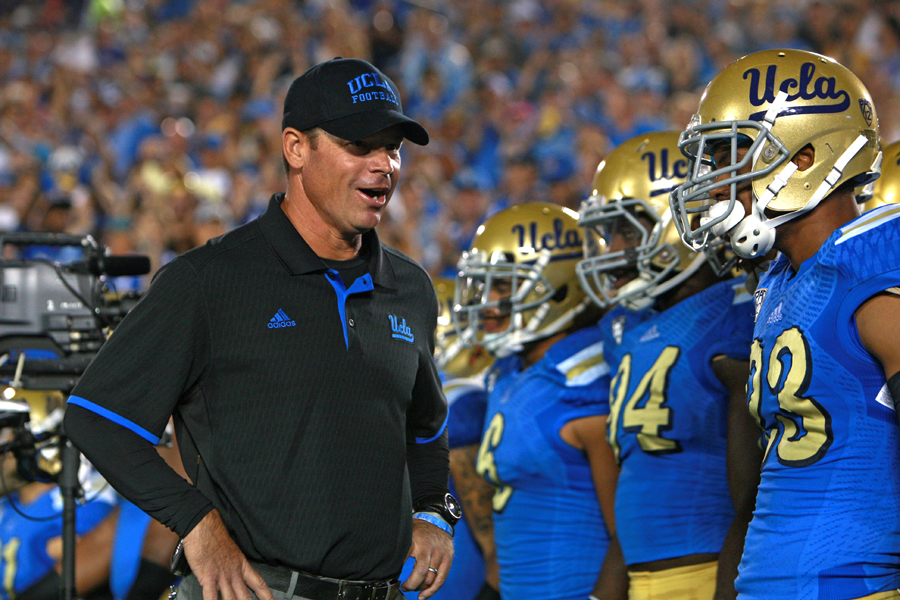 UCLA head coach Jim Mora has his eye on a title. Photo by Jason Lewis

The Bruins have a super star quarterback, but questions elsewhere

As the 2016 regular season begins, UCLA has a major strength in a key position, but there are questions throughout the roster.  Even with their issues, they open the season ranked No. 16 in the nation in the AP poll, and many experts are picking them to win the PAC-12 South and possibly winning the entire conference.  Their first game against Texas A&M will answer a lot of questions surrounding this team.

Super star quarterbacks win in football, and UCLA has one.  Josh Rosen was the highest rated quarterback coming out of high school in 2015, and he showed why from his very first college game last year.  As a true freshman, he showed why many people believe that he will compete for the Heisman Trophy and be the top pick in the NFL Draft when he is eligible to go pro.

A superstar quarterback can make all of the difference in an offense, and “Chosen Rosen” is going to have to do that, because the Bruins are inexperienced just about everywhere else offensively.

Last year UCLA’s offensive line was a strength, allowing only 15 sacks, and allowing Rosen to thrive.  But three of those players have moved on to the NFL, leading one of college football’s most experienced lines to become one of the more inexperienced lines.

Adding more uncertainty to the mix, UCLA has promoted Kennedy Polamalu to offensive coordinator, which means changes in the offensive philosophy.  They will probably run more of a power-based offense, which they may have to, because they are also inexperienced at wide receiver.

Rosen’s three top targets from last year have all moved on to the NFL, which is very concerning.  That may lead UCLA to lean more on the running game, but that may also be an issue.  Junior running back Nate Starks and sophomores Soso Jamabo and Bolu Olorunfunmi will have to replace Paul Perkins’ 1,343 rushing yards from last season, as last year’s leading rusher has moved on to the NFL.  The returning trio combined for 923 yards with a 6.1 yards per carry average, which is really good, and it gives UCLA a lot of depth at the position.

With Rosen at quarterback, it would be hard to believe that UCLA would totally ditch the spread offense in favor of a power offense, but if the receiving corp does not emerge as a strength, the running game is going to have to pick up a lot of the slack.  It looks like they will find a balance between the two.

With Rosen, the receivers should look good based on having a super star quarterback passing the ball to them.  Junior Darren Andrews could have a breakout year, and senior Ishmael Adams, a freakish athlete who moved over from cornerback, could emerge as a special player.

Defensively, UCLA flat out has to be more physical than last year.  While they did well against the pass, which should hold true again this year, their run defense last year was well below par.  Losing defensive tackle Edie Vanderdoes and linebacker Myles Jack, their two best defenders, to season ending injuries early in the year, greatly hurt their front seven.

Jack has moved on to the NFL, but senior Vanderdoes is returning, which will greatly improve the defensive line.  And to further strengthen the front seven, UCLA is switching from the 3-4, which they did not have the personnel for, to the 4-3, which better suits the talent that they have.

UCLA has struggled recruiting defensive linemen in recent years, but they had a pretty good recruiting class this spring.  That may not be enough to turn their defensive line around this year, but they look like they are finally heading in the right direction.

At linebacker, UCLA is returning all of their starters from last year (not including Jack, whose season ended in September).  This unit has experience, but they have to prove themselves to the a strength after last season’s struggles.

The player to watch will be true freshman Mique Juarez, who was rated No. 1 in the nation at his position in many publications.  He decommitted from USC, and then chose UCLA over a number of SEC and PAC-12 schools.  He’s the type of athlete that could replace Jack.  UCLA has done really well over the past few years at recruiting linebackers, and it looks like they are reloading at that position.  But there is one major issue.  Juarez has not practiced much during training camp, and there has not been a straightforward answer to what the issue is.  There is some talk that he may not play this year while he is trying to resolve the unidentified issue.

The Bruins’ defensive back field was a strength last year, and they are again ranked very high nationally.  They are loaded again with potential difference makers.  This group is so deep and talented that cornerback Ishmael Adams was able to move to wide receiver.

With the defensive backs that UCLA has, improving the run defense can solve a number of their issues.  With crosstown rival USC loaded at wide receiver, as well as other PAC-12 schools having high powered passing attacks, having dominate defensive backs will help UCLA a lot this year.