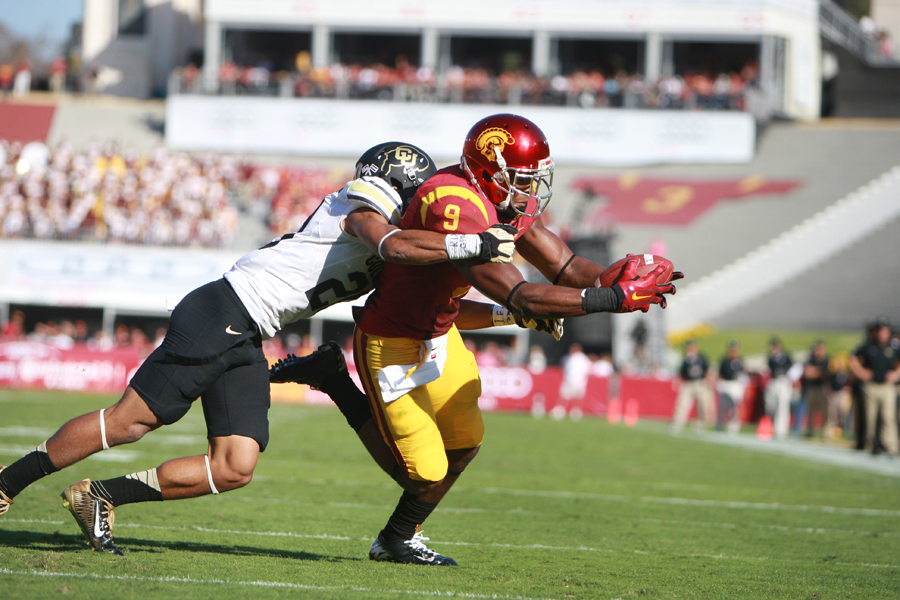 The Trojans have a talented roster, but questions in two key areas

USC’s football team has never had an issue with talent, and they are loaded at several positions as they are ranked No. 20 in the AP poll.  But quarterback and defensive line may be a major problem for this team when they open the season against top ranked Alabama.

At wide receiver, USC has one of the best groups in the nation, which features junior JuJu Smith-Schuster, arguably the best wide receiver in the nation.  Last year he had 89 catches for 1,454 yards and 10 touchdowns.  Darreus Rogers has all of the physical tools to be a great receiver, and he has one final year to put it all together.  And junior Adoree’ Jackson, who is also a kick and punt returner and cornerback, is one of the most freakish athletes in the nation.  The question is, how much time will he see on the offensive side of the ball?

At running back, USC will feature two backs.  Senior Justin Davis is a returning starter, and he will most likely split carries with sophomore Ronald Jones, who many believe is the most talented back on the roster.  Jones led the team in rushing last year and looks like he is an emerging star, as he had an impressive year.

The Trojans’ offensive line is very experienced, with their projected lineup filled with seniors and juniors.  They are also very talented, but that was also the case last year when USC finished 70th in the nation in rushing offense.  The line underachieved to some degree last year, but they have the personnel to be a strength on this team.

The big question is at quarterback, which is surprising and alarming.  Junior Max Browne was supposed to be USC’s next big-shot quarterback.  Coming out of high school, he was named the national player of the year by Gatorade, and he was the highest rated quarterback on many recruiting lists.  All he had to do was wait for his turn at USC, and stardom wasn’t going to be far behind.

It has been an usually long wait for a highly recruited player.  The Max Browne era is finally supposed to start, but coming out of spring camp, he was not named the starter.  He took the bulk of the first-team snaps during the spring, but redshirt-freshman Sam Darnold pushed him for the job.

Is Darnold that good, or is Browne not living up to his potential?  Browne has been named the starter heading into the season opener, as he is more mature and has a greater grasp of the offense, but Darnold is more physically gifted and has been very impressive because of his mobility.

The type of offense that USC will run has also been questioned.  Will USC have a run-first offense, will they spread the ball around to their talented receivers, or will it be some balance between the two?

If USC has quarterback issues, can the talent at the skill positions and on the line make up the difference?

Defensively, USC has a lot of positives, but one big problem up front, which can easily effect the entire unit.  The defensive line struggled last year, and all of those players are gone.  Replacing them are talented but highly inexperienced players.  If the line struggles, which many believe that it will, it can put a lot of stress on the linebackers and defensive backs.  Losing the battle at the line of scrimmage could sabotage the entire defense.

With the return of defensive coordinator Clancy Pendergast, USC plans on running a 5-2 defense.  Under Pendergast, USC led the PAC-12 in defense three out of four years, but he was not retained when Steve Sarkisian was hired as head coach.

While there is talent with the line, the issue is that they lack experience and depth at that position, which is going to put a lot of stress on their linebackers.  That unit also has a lot of talent, and they look like they can pick up the slack.

After a great freshman year, there are lofty expectations on middle linebacker Cam Smith.  The defensive scheme is suited for his abilities, and he has the opportunity to become one of the best linebackers in the conference, if not the nation.

The brightest spot of the defense is their star studded backfield.  They have one of the best cornerback tandems in the nation, with junior Adoree’ Jackson and sophomore Iman Marshall.   Both were highly ranked coming out of high school, and they both have lived up to the hype so far.  The safeties are also extremely good with junior Chris Hawkins and sophomore Marvell Tell.

USC’s schedule is also an issue.  Eleven of the teams that they play this year played in a bowl game last season, and they start off the season with games against Alabama, Utah, and Stanford.  If they want to stay in the national championship race for long, they will have to figure out their issues in a hurry.