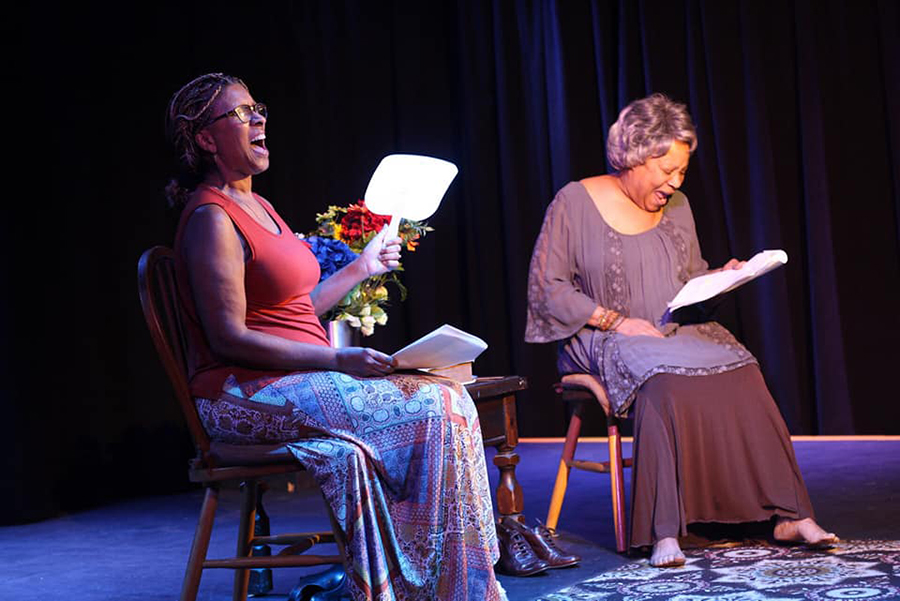 Actresses Iona Morris (left) and Juanita Jennings perform in a production produced by the Black Creative Collective at the Willie Agee Playhouse.

The Inglewood venue holds plays, concerts, and workshops for actors.

After a 15 year hiatus, the rebirth of the 55-seat Inglewood Playhouse at Edward Vincent Park in 2016 has given locals intimate, exciting, and inspiring forms of entertainment through staged plays, showcases, and concerts.

“It’s like you have a birds-eye view,” said Shelli Boone, managing and artistic director at the Willie Agee Playhouse.  “When you come to a play in a bird-box theater, it’s like you’re a part of the show.  If the scene is in a living room, you’re in that living room.  If the scene is in a jail cell, than you’re in the jail cell.  It makes you feel so personal to whatever is going on on stage.  People can holler out, and I think that’s the beauty of it.  The actors, singers, and performers get their energy from the audience, and you can really get the energy because you’re so close.”

The playhouse is named after Willie Agee, who is a 90-year-old Korean War veteran and a retired Inglewood Parks and Recreation commissioner.  He has a great appreciation for performing arts, so he lobbied to have the venue reopened.  The city of Inglewood granted Boone the opportunity to bring productions and workshops to the venue.

Boone has formed partnerships with local writers, actors, and organizations that produce plays, such as the Black Creative Collective.

“Our focus is working in South L.A. and Inglewood because we’re really trying to bring arts to communities that are thirsty for it and have been sort of left out,” said Mildred Marie Langford, chair of the Black Creative Collective.  “A lot of people look toward downtown or more of on the north side when they’re looking for the arts.  But we are really focused on bringing the arts to people who look like us.  Where we can share our stories, and people have a really good understanding of it.”

Both Boone and Langford host classes for upcoming actors, as well as workshops on creating one-person shows, auditioning for commercials, self-taping for auditions, the business of acting, funding projects, voiceovers, and many more topics.  These workshops are open to actors and writers of all experience and skill levels.

The Willie Agee Playhouse is holding Black History Month performances, with plays by Ladarrion Williams, who is a playwright, screenwriter, filmmaker, and novelist.

“We have 10 different plays that chronicle Black American life from the 1800s to now,” Williams said.

Williams writes plays that are about Black culture.

“My motto is ‘write stories about us for us,’” he said.  “That’s my biggest thing, because I feel like people like us just weren’t on stage.”