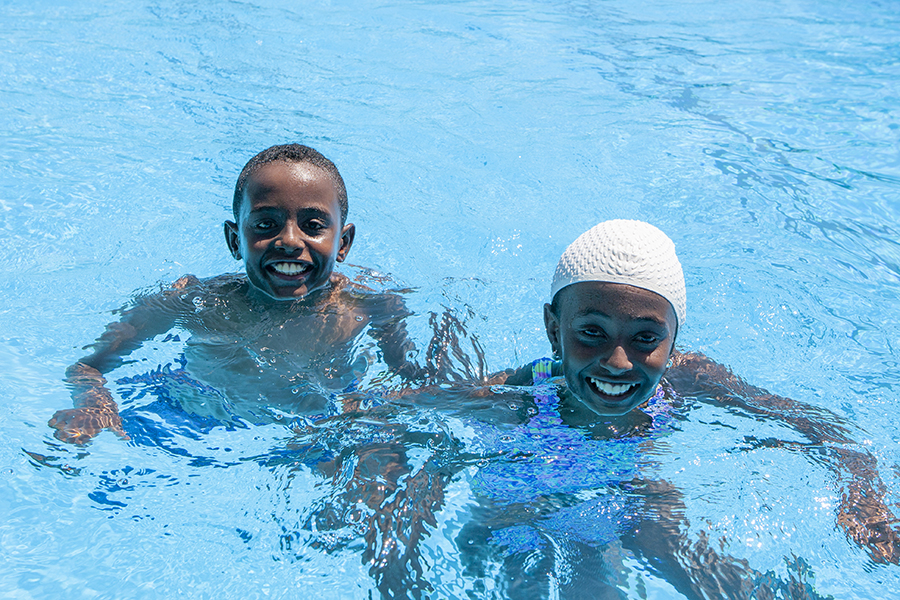 Youth swimming classes and the junior lifeguard program are offered through the citywide aquatics program. Photo by Jason Lewis

“Our parks and pools play a key role in facilitating community life, increasing well-being, and reducing the social costs of isolation and stress,” Harris-Dawson said.  “This $17 million investment in infrastructure has been a long time coming.  I’m glad we found the political and community will to create and upgrade the open spaces where families and friends can gather.”

Historically, Black people have had limited access to swimming pools in comparison to White people.  According to the USA Swimming Foundation, 64 percent of Black Americans have little to no swimming abilities.  The foundation also found that when an adult does not know how to swim, the children in that household only have a 19 percent chance of learning to swim themselves.  According to the Centers for Disease Control and Prevention, Black children ages 5-19 drowned at rates 5.5 times higher than White children.

After the 1994 Northridge earthquake, the pool at Van Ness Recreational Center sustained major damages.  After repairs it stayed open, but eventually the outdated pool could not stay open.

“We were able to keep it open for the community because there was really no other pool in the area that people could walk to,” said Andre Brent, principal recreation supervisor of the City-Wide Aquatics Division.  “So we kept it going as long as we could, but around 2005, that’s when the pumps started giving out.  So the city said that it’s time to close and start considering a new concept.”

Reopening the pools was very important to Brent because he learned how to swim as a child at the pool Van Ness Recreational Center, which opened in 1953.

“I grew up at this pool,” he said.  “I started swimming here in about 1965.  I’m a product of the neighborhood.  I grew up about a block and a half away from here and I used to walk here.  I was on the swim team here and we had a lot of fun.  We competed against the other parks in the area.”

Brent earned a swimming scholarship to California State University, Northridge, and in the summers he always had a job at a local swimming pool.  After graduating his experiences working at swimming pools led him to his lifelong career.

Both of these new pools are Olympic short courses and have heating systems, filters, and pumps designed for year-round operations.  These swimming pools offer top of the line amenities.

“What I love about these pools is that they tore it all down and rebuilt it,” Brent said.  “The idea to just go in and retrofit it; that wasn’t going to be good enough for here.”

The Citywide Aquatics program has a youth lifeguard program, and offers employment opportunities.

“You learn how to swim, and then our next goal is to hire you on in some capacity to work here in your own community,” Brent said.

In the past local high schools have used these swimming pools for their athletic programs, and with these new state-of-the-art pools, they’ll be able to offer their swimming teams better facilities to train at.

“Crenshaw High School can revitalize their swim team,” Brent said.  They had an excellent swim program at one point.  We have the charter schools and junior high schools in the area.  We can host meets here.  We have automatic timing.  This pool is certified official Olympic short course.  We have the Olympics coming up here in 2028.  Who’s to say that one of the swimmers out of Van Ness Park can’t at least get a shot at an Olympic team?”

These pools being opened year round is important because it keeps the children interested in swimming programs.

“We won’t lose the kids for nine months,” Brent said.  “Many of them won’t come back.  But now we get to keep them.  We really get to keep that hook in them throughout the year.”

Fitness wise, the pool will be open for people who incorporate swimming into their exercise programs.  People can swim on their own, and the parks offer fitness classes.  The pools also has mommy and me courses where parents can bond with their babies while introducing them to the water.  These pools also have recreational periods where children can play.