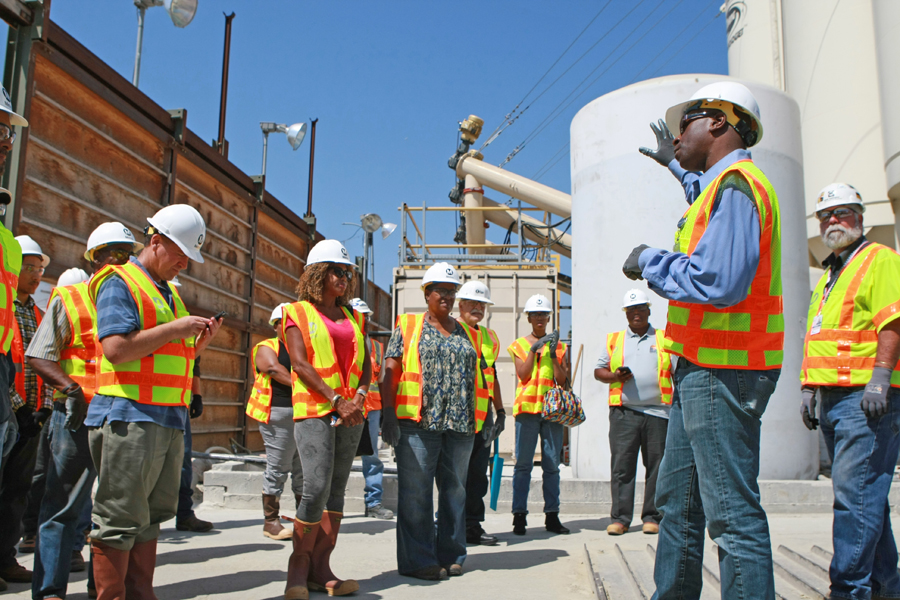 There is a discussion to extend the line north of Exposition Blvd.

Metro forges ahead with the Crenshaw/LAX Transit Project.  Days after the tunnel-boring machine broke ground at the underground Martin Luther King Jr. Boulevard station box, Metro gave the Crenshaw/LAX Community Leadership Council (CLC) a hardhat tour of the construction site at the corner of Crenshaw Blvd. and Rodeo Rd.

The CLC, an advisory body appointed by the Metro to represent the diverse interests of residents and business owners in the area of the massive construction project, was able to view the six-story hole that will house the subway station at the northern end of the line.  Metro officials answered various questions from CLC members, from construction details to the effect that this project will have on the community.

Various routes beyond Exposition Blvd. are being discussed.  One plan has the line making its way at some point to San Vicente Blvd., where it will continue north, past the Beverly Center.  Another route has the line connecting with either the Purple Line at Wilshire/La Brea, or with the Hollywood/Highland Red Line station.

The Crenshaw/LAX Line is scheduled to be completed by 2019, costing $2.059 billion.  Ground breaking for the northern extension of the line could happen as soon as 2020 if the project gets the green light.  The passing of Measure M, which increases the countywide sales tax from nine percent to 9.5 percent, could pave the way for this project.  It is projected to raise $860 million a year.

A half-a-cent sales tax made the Crenshaw/LAX line possible when Measure R was passed in 2008.

After the question-and-answer portion of the tour, CLC members were taken over to the construction site on Crenshaw Blvd. between Rodeo Rd. and Exposition Blvd. to view the progress of this project.

At the bottom of this station box is where the 400-foot long tunnel boring machine, which is named “Harriet” in honor of abolitionist Harriet Tubman, started it’s journey southbound down Crenshaw Blvd.  After breaking through the wall at Martin Luther King Jr. Blvd., the machine was disassembled, transported to the southern end of that station block, and then reassembled so that it could continue it’s path to the Leimert Park station.

Harriet is expected to complete its journey to Leimert Park in October, and then it will be disassembled again, and transported back to the station at Rodeo Rd., where it will excavate a parallel tunnel.  One tunnel will be for the northbound track, and the other for the southbound track.