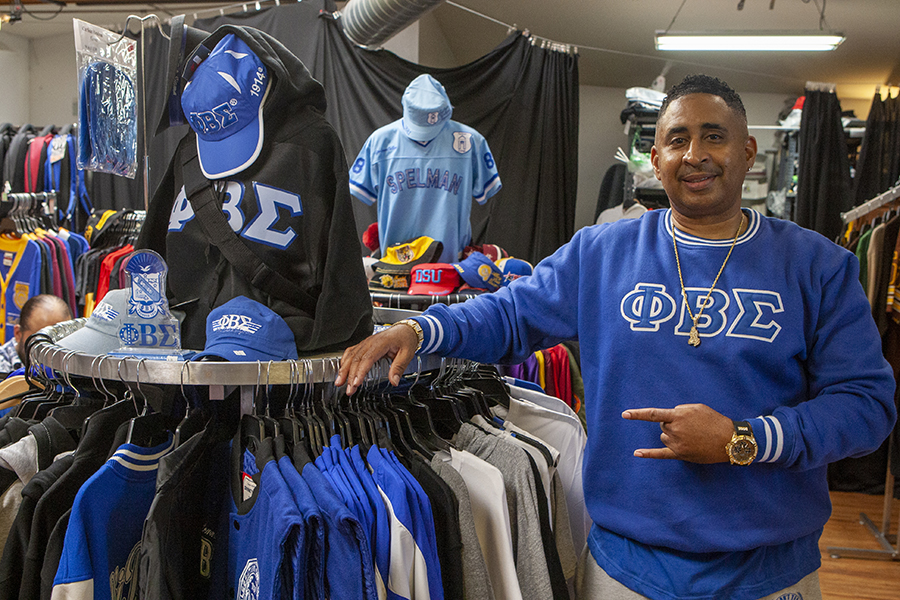 Brian Compton, All That and Sum Greek Warehouse. Photos by Jason Lewis

Black residents of the greater Los Angeles area who are members of Divine Nine fraternities and sororities, and who attended Historically Black Colleges and Universities (HBCUs), typically have a hard time finding merchandise for their organizations and alma maters.  Brian Compton opened All That and Sum Greek Warehouse in downtown so that locals would have a place to easily find that type of merchandise.

Compton has been selling Divine Nine, HBCU, and Masonic merchandise since the late 1990s at trade shows, market places, and events.  He attended Grambling State University and is a member of Phi Beta Sigma Fraternity, Inc. (he was initiated into the fraternity at Northeast Louisiana University).  After hearing several people complain that it was difficult to find Divine Nine and HBCU merchandise in the Los Angeles area, he opened his store so that people could find t-shirts, sweaters, jackets, hats, pins, and other items associated with their organizations and colleges.

“I realized that we didn’t really have an outlet to shop at,” he said.  “The only outlet that we did have was another establishment (near USC) that pretty much had a monopoly on the game.  But they really didn’t specialize in the Black Greeks (and they do not carry HBCU merchandise).  So after hearing time after time that we had nowhere to shop as Black Greeks specifically, and getting a lot of good feedback from the vending events that we did, our customers would always tell us, ‘If you guys open a store, we’ll support you.’  So I took that leap of faith and opened a store.”

“I feel that in this industry, since it’s a niche, you kind of want to deal with those of like nature,” Compton said.  “So by me being a Black Greek, I can hear the cry of the Black Greeks because they didn’t have any shopping selections.  When I opened this store, I wanted people to have a shopping experience.  I didn’t want people to come in and there would only be a couple shirts here and a couple shirts there.  I wanted there to be an array of items.  I wanted people to come here and feel welcomed and feel like they’re in an establishment that shows that they care about your Greek life, your organization, and your HBCU.  The reason I can do that is because I am in a Black Greek organization and I went to an HBCU.  I understand the travels that Black Greeks and HBCU grads had to go through to find merchandise, specifically here in the Los Angeles area.”

Many people purchase their Divine Nine and HBCU merchandise online, but there are benefits to in-person shopping.

“One of the problems that people would run into when shopping online was sizing, fitting, misjudgment of the description of the item,” Compton said.  “By opening this store, we’ve provided not only an actual place where you can come touch the item and try it on, you can also pick it up now.  You don’t have to wait.”

Compton felt that it was important to sell both Divine Nine and HBCU merchandise, and many of his customers fit both categories.

“I feel that it’s really hard to separate the two,” he said.  “I feel that the Divine Nine Greek life co-exists with the HBCUs, being that a lot of our organizations were founded on HBCU campuses, give or take for a few.  The HBCU spirit is entangled in the Divine Nine experience.”