The local organization hosts a weekly food giveaway at Sole Folks in Leimert Park, as well as in Compton and San Pedro.

Let’s Be Whole has provided local families with fresh fruit, vegetables, meats, and other grocery products for the last two years, and their efforts have been even more important during the COVID-19 pandemic.

“We have made a great impact in our community during the pandemic because a lot of people have lost their jobs,” said Nina Womack, founder of Let’s Be Whole.  “People have said to me that this is just enough to get them by until their next paycheck.  This is helping to reduce the amount that people spend on groceries.”

“We offer nutrition security to underserved communities who don’t have the opportunity to shop at Whole Foods and Trader Joe’s,” Womack said.  “This is not just for poor people, this is for everybody.  It’s free to the community and there are no income requirements.” 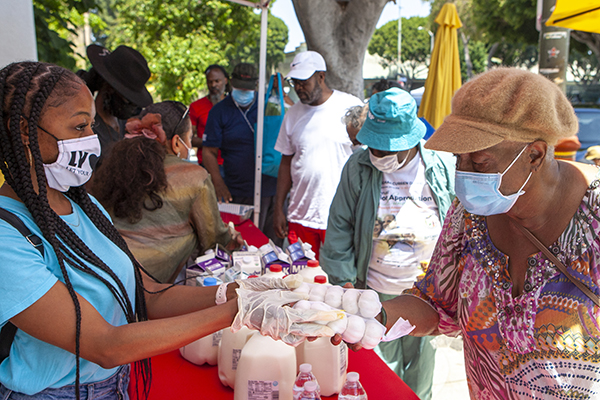 Womack grew up in South Los Angeles, so helping her community is of great importance to her.  She is also helping people overseas, as she recently returned from Ghana in West Africa.  She was installed as a Queen Mother of a village.

“I’m working to expand this food pantry not just here in Los Angeles, but also in Africa,” she said.  “I look forward to bridging the gap between the diasporas here in South L.A. and with our people in Africa.  Through food, hopefully we can make that connection.”

Sole Folks co-founder Akil West welcomed a partnership with Let’s Be Whole because he is also from South Los Angeles.  He attended Audubon Middle School and Crenshaw High School, and he wrote a children’s book titled, “I Grow My Own Food.”  The book is about a young girl who wants to start her own garden.

Local residents greatly benefit from the partnership between Let’s Be Whole and Sole Folks.

“This program is most impactful because it’s showing our love for community,” West said.  “There’s not a lot of options here in Leimert Park because of the closing of one of our biggest grocery stores (Ralphs on Crenshaw Boulevard and Slauson Avenue).  And the only other one that’s within a mile radius (Albertsons at the Baldwin Hills Crenshaw Plaza) is also going to be closing down for construction.  It’s important for organizations like Let’s Be Whole to help feed this community in a situation where there is blight.”