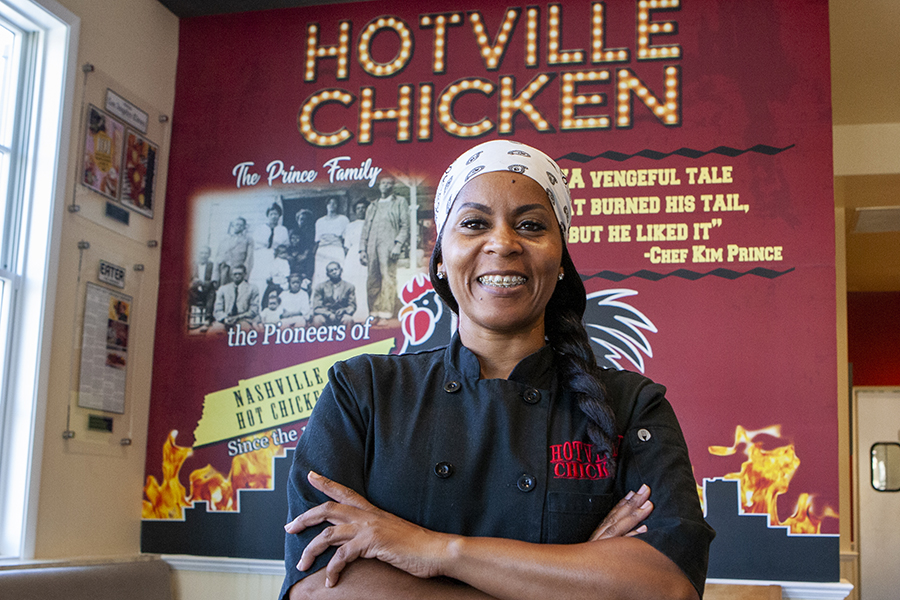 Kim Prince partnered with Gregory Dulan to open the restaurant at the Baldwin Hills Crenshaw Plaza.

The popularity of Nashville hot chicken has spread throughout the country, and restaurateur Kim Prince has brought it from her hometown to South Los Angeles.  Since opening Hotville Chicken at the Baldwin Hills Crenshaw Plaza in 2019, locals have raved about this style of fried chicken.

“What makes Nashville hot chicken unique is the spice blends that we put in it, not on it,” Prince said.  “Our secret blend of spices is in our flour mix.  It’s in every step of our process from our marinade, to how we flour it, to how we fry it.”

Many people on social media become food critics, especially people who have moved to Los Angeles from the South.  Local restaurants that serve Southern dishes usually are not well received by transplants.  But Hotville Chicken has won that crowd over.

“‘They say that ‘she’s cooking it right,’” Prince said.  “‘That’s real Nashville Hot Chicken.’  They get piece of home when they come here.”

“Long story short, my great-great-uncle Thorton was a tall, dark and handsome man,” Prince said.  “He had a lot of women in his life.  The mistresses decided to get back at him by putting a spice concoction of cayenne pepper paste all over his favorite meal, which was fried chicken.  Well that lovely dish turned into something that he really loved along with his brothers and my grand daddy happened to be one of them.  They got together, perfected that recipe, and created the first Nashville hot chicken shack in America called the Original Hot Barbecue Chicken Shack, now known as Prince’s Hot Chicken Shack in Nashville.  It started around 1936, and it’s been cooking and frying with grease ever since.”

Prince grew up working in her family’s restaurant, and she came to Los Angeles in 2013 with the intent of bringing Nashville hot chicken here.  She began with pop-up stands that moved around Los Angeles County.

“I was kinda known as the ‘Hot Chicken Vagabond’ because I didn’t have a permanent nest,” she said.  “In 2017, one of my popups in Chinatown happened to have a guest standing in line named Gregory Dulan.”

The Dulan family is well known in South Los Angeles and Inglewood for their soul food restaurants.  Gregory Dulan fell in love with Prince’s hot chicken dishes and he was amazed at people’s reaction to it, so he decided to help her find a permanent home.  The Dulans have served Los Angeles’ Black communities for decades, so he knew which community that he wanted to see this new restaurant in.

“He said that we need to do it in our own neighborhood,” Prince said.

Hotville Chicken is located in the parking lot of the Baldwin Hills Crenshaw Plaza.  There had been a Fatburger at the location for many years.  A country-style restaurant moved into that location, but went out of business.  It was the perfect location for Prince to move into because it had a full kitchen, so she could cook to order instead of using heat lamps or microwaves.

“I didn’t want to do a process where your chicken is sitting there sweating under a lamp like you see in a lot of fast food chains,” she said.  “This isn’t a fast food.  I’m sorry that I can’t pump it out in less than five minutes.  You might have to wait about seven minutes or 10 minutes, but I promise you that you’re going to feel all of the love that we’ve got to put in it.  You’re going to taste every seasoning that’s in it.”

It was also important for Prince to open her restaurant in the Crenshaw district because she lives in that area.  She also wanted to bring a specialty restaurant to an area that mostly has fast-food franchises.

“I feel like the area that we’re in doesn’t have very many niche food offerings,” she said.  “We have plenty of fast foods.  We don’t need anymore fast food.  I like to offer down-home cooking in a commercial space.”

While Prince has formed a loyal fanbase, she needs more community support for her restaurant to thrive.

“When we were doing research on our sales, we discovered that some 60 percent of our customer base from the past two and a half years come from three miles or more outside of the area.”

While Hotville Chicken has won numerous awards and has been featured on television and in newspaper articles, without local community support the restaurant will struggle to stay in business.

“It doesn’t mean anything if the neighborhood doesn’t get out here and support the businesses that are on this property,” Prince said.  “Not just Hotville.  Post & Beam, Kickin’ Crab, Jammrok Jerk Chicken in the mall, and Southern Girls Desserts in the mall.  Without the support of the neighborhood, the businesses that are here are going to dry up.  We don’t need to lose another business in this corridor.

“I was raised to support our own businesses intentionally.  We recycle our Black dollars.  That’s how I was taught.  We always shopped, played, ate, and worshipped in the neighborhood where we grew up, and that’s what I do here.  I like to shop around here.  My church is down the street.  This is work, eat, play for me.”

Hotville Chicken is open for inside dining Tuesday through Sunday, 12 p.m. to 7 p.m.  Online delivery orders are available through Postmaes, Ubereats, and Doordash.  Visit their website at www.hotvillechicken.com and follow them on social media.