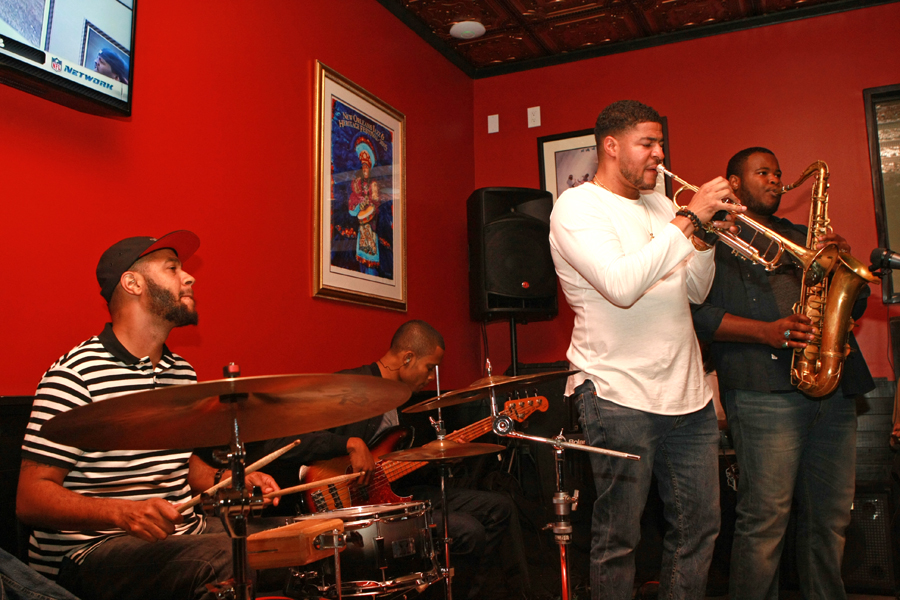 It’s Friday night in Leimert Park.  You enter Harold and Belle’s, a staple in this community since 1969, and quickly learn that they’re serving up more than their famous creole cuisine.  On Fridays your meal comes with a side of the jazz stylings of The Supa Lowery Brothers Band, and they know how to pack the house.  Jazz lovers young and old fill the bar area to capacity most Friday nights, just to hear that special sound that The Supa Lowery Brothers Band is known for.

Twin brothers, Chris Lowery (trumpeter / song writer) and Wesley Lowery (drummer / producer) are the frontmen for The Supa Lowery Brothers Band.  Together with longtime friends, who play piano, guitar, and saxophone, the band is making a name for itself on the Los Angeles jazz scene.

Natives of Philadelphia, The Brothers, as they are called, are the sons of Tom Lowery, a professional drummer, and have a natural affinity for music. Their raw talent was first developed with the Tony Williams Youth Jazz Ensemble.  They then attended Philadelphia’s High School of Creative and Performing Arts, and went on to earn degrees in Jazz Studies from Long Island University.

Though the band got its start in New York, the members now call Los Angeles home.  The band can be found entertaining fans at Harold and Belles and Santa Monica’s Shutters on the Beach weekly.  Fans can expect to groove to the band’s unique jazz renditions of popular hip-hop and R&B titles.  “It’s jazz of the times,” says Wesley Lowery.  “We play jazz for our peers.  You see, we grew up in the hip-hop generation.  We had to make it jazz that [our peers] could understand and that they could feel.”

The Supa Lowery Brothers music is reaching more than just their peers.  They are introducing a whole new generation of music lovers to the allure of jazz.  As their star and their following grows, the band has garnered the attention of Hollywood.  The band has opened for comedian Dave Chappelle, and recently played on an episode of Love & Hip-Hop, at the wedding of R&B singer Ray J.

What’s next for The Supa Lowery Brothers Band?  They have just completed a new EP entitled Love Park, which has been released on iTunes.  Check it out.