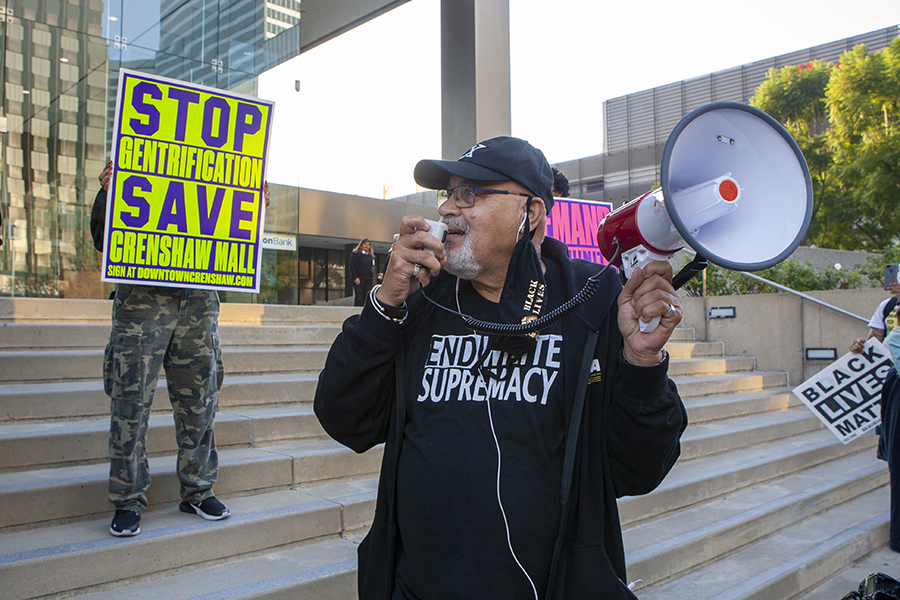 •Baldwin Hills Crenshaw Plaza is more of a community hub than other malls.

•Some local community groups are supportive of the sale of the mall to LIVWRK.

Also read: Downtown Crenshaw bids for their 40 acres and a mall, but are turned down (November 2020) and Baldwin Hills Crenshaw Plaza’s New 40+ Acre Suit (August 2020)

The controversy over the sale of the Baldwin Hills Crenshaw Plaza has continued as some local community groups are in favor of the mall being sold to LIVWRK, and other community groups, specifically Downtown Crenshaw, being against this sale.  Downtown Crenshaw’s concern is that the sale to LIVWRK would accelerate the existing gentrification problems in Black communities of South Los Angeles.  LIVWRK’s bid to purchase the mall has been accepted while Downtown Crenshaw’s bid was not.  The sale has not been finalized.

This has been a contentious issue because of what the mall means to many people in South Los Angeles.  Locals have memorable experiences at the mall; unlike most malls it serves as a community gathering place for the predominantly Black community in the areas surrounding the mall; and it is the largest economic hub in the area.

“The key thing about the mall is that this is not something that you can compare to any other mall,” said Jason Lombard, director of community outreach at the Baldwin Hills Crenshaw Plaza.  “It is really a place that the community has taken and made it into their mall.  I think that the passion that you’ve seen around the sale of the mall comes from the fact that people have stories here.  I worked at Magic Johnson Theaters.  That’s one of my first jobs.  The tiles that were in front of the theater that had everyone’s names on them, that was a project that I worked on when I used to do the theater at night and the corporate office during the day.”

As mainstream franchise stores and restaurants opened locations at the mall, Lombard said that there was an effort to make sure that the community was involved.

Capri Capital Partners, a Black-led global real estate manager, purchased the mall in 2006 for a reported $130 million, and invested a reported $40 million in renovations.  The upgrades led to the mall becoming more of a community hub that hosts events that the typical mall does not.

“Just the bridge (adjacent to Macy’s),” Lombard said.  “Once you put a window there and it becomes a meeting space for everything.  We’ve had jazz events up there.  Taste of Soul has their auditions for their StarQuest auditions.  We’ve been able to become a local partner.”

The mall is the location for the Pan African Film Festival, Leimert Park Book Fair, Crenshaw Farmers’ Market, Winter Wonderland, and several concerts throughout the year.  AARP holds an exercise program for senior citizens at the mall. 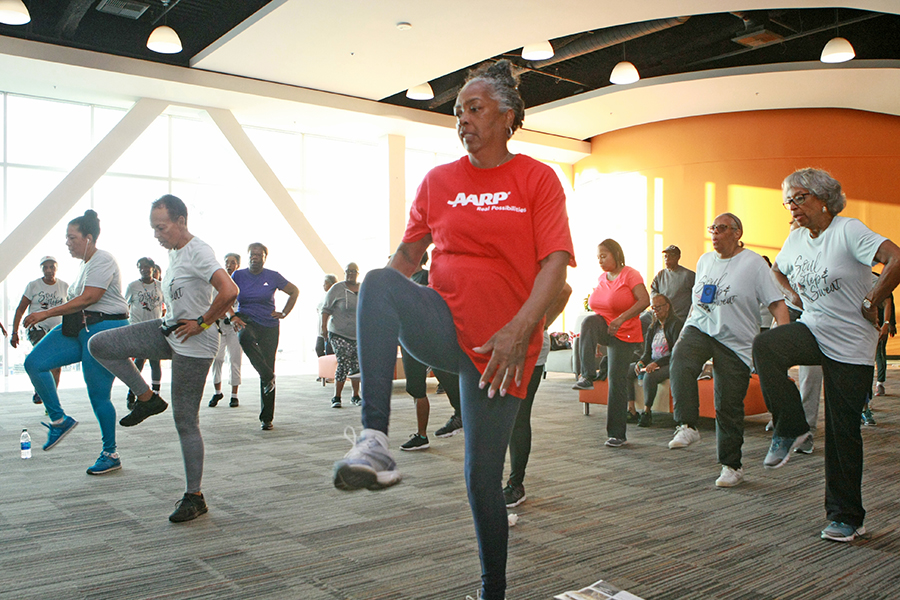 “I think that I can say with confidence that you’re not going to find a mall that does as many community focused events as we have,” Lombard said.  “When you look at a lot of the events that we’ve had, a lot of that is a focused effort to make sure that we are a partner within the community.  Right now we have a group that comes and does line dancing in the parking lot for First AME Church.  If you’re looking at another mall in another area, I don’t think that event happens.”

Concert wise, the mall has hosted concerts from local musicians such as Barbara Morrison and the Fernando Pullum Community Arts Center, and they have hosted concerts that featured celebrities such as Chrisette Michele, Faith Evans, Slick Rick, Doug E. Fresh, and Monica.

“People who may not have the resources to be able to go to the BET concerts at L.A. Live in downtown, get to experience that for free within the mall,” Lombard said.  “That’s where us as a people working together, we’re able to accomplish things that you wouldn’t see at other malls.”

Lombard wants to see the community based activities continue once the sale of the mall is completed.

“With the sale of the mall, one thing that can’t get lost is that there has to be somebody who comes in and still has that focus,” he said.  “From what I’ve seen from LIVWRK, they’ve had that focus.  The first conversations that they had from my understanding was, what’s going to happen with some of the local small business tenants.  Which of the tenants are important community wise, and which tenants need help.  It’s very important that those things are there, and that those programs that we’ve all come to love really continue.  It’s my understanding that those things will continue. 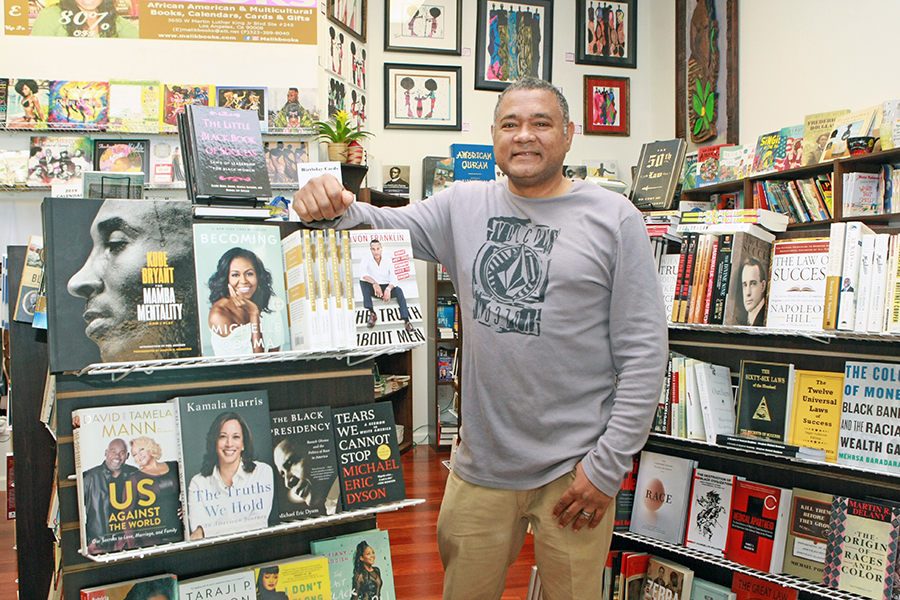 When LIVWRK founder Asher Abehsera sought out to place his bid, he met with several community groups, home owner associations, neighborhood councils, and block clubs that are in the vicinity of the mall.

“I thought from the get-go that it was essential to spend and invest time and energy in forming and creating authentic relationships within the community,” he said.  “It’s not a roadshow where you meet and shake everybody’s hands, and say, ‘Now I have the community.’  It means a collaborative process.  The reason that it’s important is because most developers and investors in real estate don’t even meet anybody until way after they close and way after they have their plan in place.  So I did a lot of things that were unconventional to really illustrate and establish to the community that I really want to get to know you.  It’s important that we have a relationship.  You can’t create anything of substance that would have the communal support, unless they participate and play a role, or have a voice or a seat at the table.”

Abehsera said that his vision is to have a good relationship with community members and groups so that decisions can be made to celebrate and lift businesses that the community embraces.  He also said that he would continue the community-based events that the mall has featured over the last several years.

“Once I close, I would step it up,” he said.  “The way that I saw this opportunity is a place to engage the surrounding neighborhoods.  What I found is singularly in this area is that you have a lot of passionate residents who want to be involved.  That’s a great thing.  We want to give the area a more elevated experience in terms of engagement, in terms of opportunity, in terms of entertainment and experiences.  There’s so much open area that can be better programmed at the mall today.  And cultural events are absolutely in the ethos of what needs to happen there.  And it needs to be really celebrated in a proud way.  So we would look to enhance those experiences, not remove them.”

“It’s rare to find a developer interested in a true partnership,” Franklin said.  “LIVWRK is honoring their commitment.  Our partnership will work with the community to ensure accountability in development and ownership.”

Community groups such as the Baldwin Hills Crenshaw Neighborhood Planning Alliance are also supportive of LIVWRK purchasing the mall.  Alliance member John Gonzalez, who is also a board member of the Baldwin Hills Estate Home Owners Association, pointed out that community engagement was one of the factors in the seller selecting a bid to purchase the mall.

“What we were told was that when the sellers were interviewing potential buyers, one of the criteria for which they were going to select a buyer was their plan for community involvement in the project,” he said.  “At that point LIVWRK came forward to the community with what I can say from being in this business, more actual engagement with this community before purchasing a property than I had ever heard of in the history of development.”

Gonzalez fears that if the sale does not go through, that the mall will close down.

“We don’t know what will happen if the sale is stopped,” he said.  “We don’t know who will buy it or what will happen.  We’re weighing this proposition as, what happens if it goes through versus what happens if it doesn’t.  If it does not go through, we’re looking at some distinct possibilities of the bleeding that’s happening at that mall continuing, and the distinct possibility that the mall will simply close down after the holiday season.”

One issue that Abehsera has had to deal with from opposing groups such as Downtown Crenshaw is his relationship with Jared Kushner, and possibly with Kushner’s father-in-law, Donald Trump.

“I’ve never met Trump in my life.  I’ve never done a single deal with him, ever.”

Downtown Crenshaw, led by co-founder Damien Goodmon, has been extremely vocal about their quest for a Black, community-led organization like their’s to purchase the mall.  They are also against a developer who is not from the community purchasing the mall, which they believe could accelerate the gentrification issues that already exist in Black communities of South Los Angeles.

“We’re moving from participation to ownership,” said Baba Akili, a member of Black Lives Matter Los Angeles and Downtown Crenshaw.  “An outside group that has no history, no understanding, or no relationships here, is the worst thing that you can do.  Particularly in comparison to the fact that you have Black people making bids.

Last month Downtown Crenshaw took their protest to Abehsera’s Century City office and Beverlywood home, demanding that the developer back out of the deal to purchase the mall.

“We have decided to come visit the gentrifier,” Akili said at the protest at Abehsera’s house.  “We want to continue to live in our community.  There are two words that we need to remember: gentrification and displacement.  It’s really the same word.  Because once they start the gentrification, we are going to be displaced.  It’s happening all across the country.  It’s in every city, and it’s in the Crenshaw district in L.A.  No matter how many other Black folks that they get to front for them, it’s not (the entire Black community).  Twenty percent of a house (the Black community) doesn’t mean that you own it.  And that 20 has to be approved by the owner.  The person that lives in this house (Abehsera), is the owner.”

If Downtown Crenshaw’s bid was accepted, they planned to purchase the mall through a community land trust (CLT), which has been made up of community members who primarily live in the Crenshaw district.  A CLT is a non-profit organization that acquires, owns, and stewards land for the common good.  Downtown Crenshaw is a creation of the leaders of the Liberty Community Land Trust.

“A CLT is basically a way for a community that is struggling around certain issues to work together to acquire land,” said Malcolm Harris, a member of both Downtown Crenshaw and the Liberty Community Land Trust.  “Once the land is acquired and taken off of the market, it is put into some community serving use, based on what the community itself sees that being.”

Harris said that a group of Black sharecroppers formed the first land trust in the United States in 1969.

“They were able to get their hands on that land and create a sustainable Black community of farmers for years in Georgia,” he said.  “The Liberty CLT is based on that same idea.  That we can acquire the land, and hold it in a way that the CLT, which would be managed by a board of residents including home owners and renters, and other stake holders here in South L.A., that would create a community vision around land ownership.  And most importantly with the Liberty CLT vision, as part of an ecosystem that seeks liberation and healing through development of a democratic economy, Liberty Community Land Trust will persevere and create permanently affordable housing, and ensure community stewardship of land.”

Downtown Crenshaw has not given up hope that they can stop the sale of the mall to LIVWRK, and have their bid accepted.