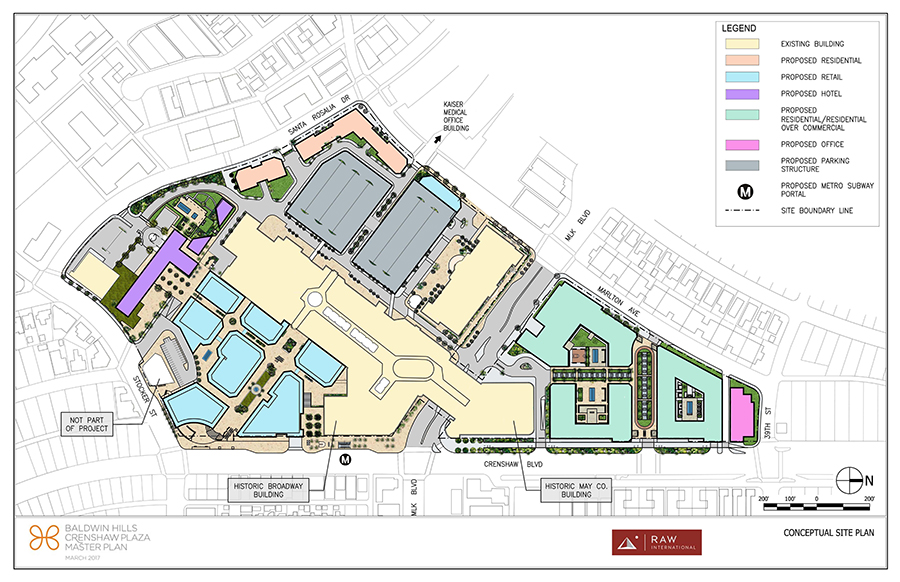 During the the 1960s and 1970s, the Crenshaw Center was the place to be.  But there is a need for adaptation, which has happened to shopping centers and districts around Los Angeles. 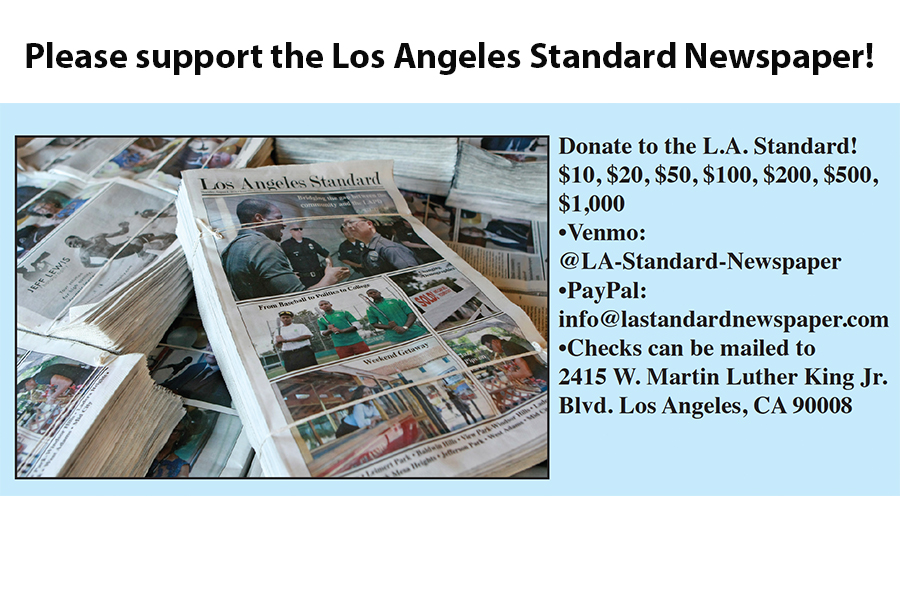 Originally built in 1947 as the Crenshaw Center, the site for the now Baldwin Hills Crenshaw Plaza (BHCP) was one of the first and most famed open-air regional shopping centers in the country for decades.  However, in the late 1980’s, the Crenshaw Center followed a now failing trend of enclosure to become the BHCP which diminished its vibrant community connectivity and just like even your best suit from the 1960s or 70s that made you the talk of the town, the Plaza can’t get an honorable mention today now that the new places and cyber spaces have overwhelmingly become consumer’s new interest.

In and out of development and operational control by various developers, equity funds and even the political will of the City of Los Angeles, the enclosed style BHCP has not been able to rise to the expectations and needs of the economically diverse neighborhoods surrounding its sprawling 40+ acres of historic retail.  Notably located in the heart of the economic hub for South Los Angeles, discourse on determining BHCP’s highest and best use, sustainability and beneficial impact on the communities it relies upon for its mere existence is front and center in our community’s consciousness.

The need for adaptation has happened to the best of them.  The Third Street Promenade was diminished to a mere collection of pale uninteresting cobblestones before its rebranding in 1989 and the renovation of its abutting Downtown Santa Monica as the boutique of boutique brand centers.  Westwood was so hot in the 1970s and 1980s that we could all never visit another retail area again and just bask in “remember when we....”.   The historic Farmers Market was just that, a market.  A place where you went to buy fresh fruits and vegetables.  There was no groove of The Grove and no one had ever thought of a shopping area as a place for outdoor concerts.  Brilliant!!!  Today, people from far and wide flock to the Grove’s Parisian style cafes and scenic shopping experience as if they were taking a trip to 5th Avenue.

However, the best retail transformation of them all is Downtown Culver City.  They flipped the script on redefining retail so well we don’t even know where they moved parts Washington Boulevard.  They relocated its direction and cut off parts of the street to expand the retail frontage to make sure we don’t fly through their town center without noticing all the cool outdoor cafes and 4-star restaurants. Their bold “how do you like me now” redefining vision redirected regional expendable incomes to the little-known Culver Boulevard effortlessly.

Ask any Angelino with nostalgic memories of the 1960s and 1970s and they will tell you that the Crenshaw Center and it’s adjacent Santa Barbara Plaza (now Marlton Square) was the place to be. You had the immaculate May Company (now Macy’s) and Broadway Department Stores where everyone proudly sought their Sunday’s finest.  Carl’s Toys & Hobbies sold awesome gifts of wonder and who didn’t get their first pair of perfectly measured shoes at Stride Rite.  To this day, every woman can point out a dress from Contempo Casuals and men who shopped at Florsheim Shoe Store were always dressed to impress.  Santa Barbara Plaza was an unprecedented collaborative of Black owned properties and businesses offering everything you needed to be uniquely you from head to toe.  It was the place to be seen by day and night. You could always run into the who’s who during breakfast at Boulevard Cafe and if you wanted to flex and have a great time, Jerry’s Flying Fox was top shelf.

Fast forward, the recently approved Environmental Impact Report (EIR) detailing a 40+ acre redevelopment and expansion Master Plan for BHCP was a significant step towards reexamining the symbiotic relationship between the elements of the plaza and its local community patrons. It also heightened the query to ensure that the community approved development plan is honored and brought to fruition.  The architects of the Master Plan, RAW International, Inc., worked to ensure that the overarching “Guiding Principles” for the new urban design of BHCP demonstrates our community’s own bold vision to utilize Transit Oriented Development to leverage its historically significant design as a vibrant open air shopping center that so many other thriving centers have come to embrace.

Anchored by the landmark buildings that were originally developed as Broadway and May Company flagship stores, the Master Plan calls for the surrounding site acreage to be intensified in use and character through the design and development of six “clusters”.  The idea is for each cluster to have a primary use “identity” that can be financially assessed as separate revenue centers: 1) Retail and Entertainment (Urban Village) Cluster, 2) Hotel Cluster, 3) Residential Condominium Cluster, 4) Structured Parking Cluster, 5) Mixed-Use Commercial with Residential Apartments Cluster and 6) Office Building Cluster.

The existing theater complex will be integrated into the project in a way that capitalizes on its current success as a public gathering place for movies, outdoor concerts and cultural events such as the Pan African Film Festival.  Insightfully, the plan was synergistically designed to strengthen the neighborhood fabric by appropriately defining the street edge around the site perimeter in ways that respond to the various surrounding land uses, building scales, and street right-of-way widths and characteristics.  Furthermore, a strong east/west axis connects the key pedestrian activity node at the southeast corner of the project through the existing mall building and onward between the two major parking structures, ultimately connecting with the Kaiser Permanente development to the west across Marlton Avenue.  An equally important connection emanates from the same node, south to nearby Leimert Park Village.

Access to the Crenshaw/LAX Metro Line scheduled to open in 2021 will be through two transit portals that are integrated into the streetscape design near the Retail and Entertainment Cluster streetscape and plaza at the southern end of the site. When combined with the already heavily utilized Metro bus stops that serve the existing shopping center, these subway access points will further activate the corner of the site that is viewed as a pedestrian-focused urban village.  The concentration of mass transit options provides the broader community with access to premier regional shopping, entertainment and social gathering opportunities.

It is abundantly clear that to successfully market and rebrand BHCP to attract neighboring audiences, the concept of the “traditional” shopping experience must be reimagined to effectively engage today's consumer.  The rise of e-commerce in the mid-1990s has forever altered the economic trajectory of the traditional mall, making way for mixed-use retail to emerge as a necessary catalyst to reignite shoppers’ interest and drive foot traffic through open air village style places that allow consumers to live, eat, play and be entertained all in one location.

In addition to the rise of digital retailing and the current pandemic which has caused a behavioral shift in the way and reasons we shop, it is critical that time and resources are allocated to determine how our audience of predominantly Black, Hispanic and Asian consumers, who boost over $2 trillion in combined annual spending power, will consume products, goods and services.  As a major part of the marketing and branding initiative, innovative market research and analysis on the effects a cross-channel content strategy will have on the concept, layout, design and function of the redeveloped property will factor into how retailers interact with customers through countless channels - websites, physical stores, kiosks, direct mail and catalogs, call centers, social media, mobile devices, gaming consoles, televisions, networked appliances, home services and more.  The data analysis will also help us understand the buying habits pre and post pandemic and apply this data to track the recovery and help adapt business models.

The community envisioned Master Plan also dares to transform the entire footprint of the site into a technologically advanced environment that can command regional economic influence. The collection of data from multi-faceted platforms and devices will position the redeveloped project to integrate high tech communication platforms and connect “smart” building technology via a campus wide WiFi network that supports commercial broadband applications for businesses, tele-learning, tele-work, tele-medicine and beyond for residential applications.  This would allow the redeveloped campus to brilliantly serve as a community connector and literally keep its finger on the pulse of consumer demands.

It is most quintessential that due diligence efforts to assess the design and financial feasibility of implementing the Master Plan embrace a collective vision to serve the economically diverse surrounding population of empty nesters, single professionals, college students, young couples and growing families alike.  Business development and operations strategies must keenly focus on the community’s needs, concerns and desires through continued efforts such as community charrettes, focus groups and public opinion surveys and polls.  Leading with a community center approach would serve as the foundational ethos for the development of the BHCP and a woven thread through any agreements for joint venture development, equity financing and most importantly, a community ownership structure.  It goes without saying that any implementation plan will need to foster a technical assistance for the existing businesses that not only have to navigate their sustainability during COVID-19, but also as they are strategically repositioned within the redevelopment plan.  Equally, technical assistance services will be essential for incubator initiatives seeking to adaptively occupy spaces to accelerate an industry cluster.

The approved Master Plan suited BHCP with a completely new mixed-use concept which has once again made its site the talk of the town.  But this time around, it’s uniquely positioned to offer new technologies of the times, flex its successful historic roots and leverage enhanced financing tools such as New Markets Tax Credits, Opportunity Zone Funding and Obama Jobs Act structured community ownership entities that can effectively redefine industry perceptions of ownership and not only enable a community centered redevelopment plan to come to fruition, but to position the visionaries of the plan as the holders of its destiny.