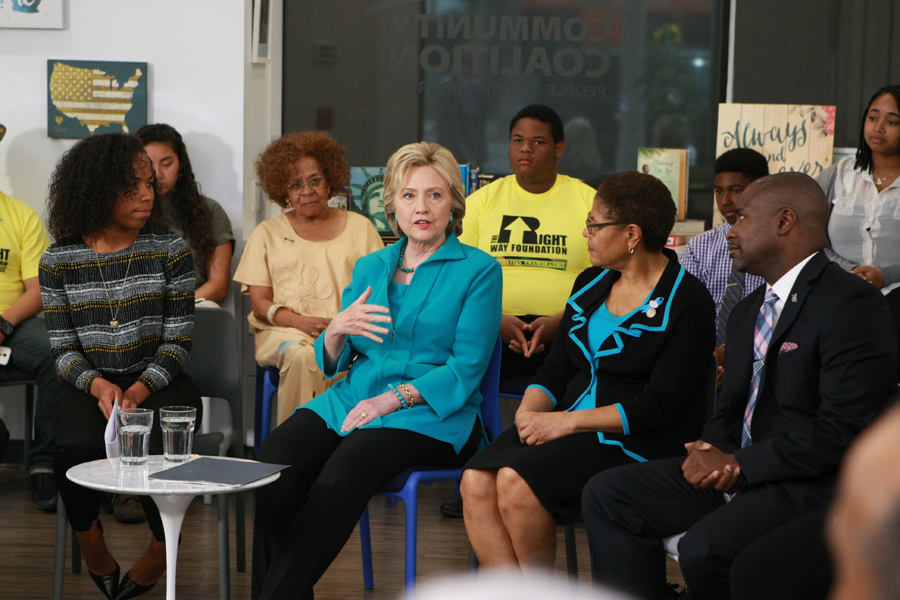 The November 8 election is approaching fast, and most people are focused on the race for the White House.  Hillary Clinton and Donald Trump are all over the news, which has piqued a number of peoples’ interest, but at the same time, the constant debates coupled with a lack of faith in the candidates has turned many people off of the voting system.

“Here in South Los Angeles, I think we face a lot of people not believing in the system of voting,” said Rosemarie Molina, Civil Engagement Coordinator at Community Coalition.  “There’s a lot of voter apathy, and there’s voter fatigue.  We have 300,000 registered voters, and 80 percent of them don’t vote in elections.

“Something we’re hearing out in the field now is that people don’t feel like the presidential candidates necessarily represent them.  They can’t relate to them.  So then they just don’t want to vote, and they completely forget about all of the really important propositions.”

These propositions can have a major impact on communities throughout the nation, and in the state of California there are 17 measures on the ballot that can change many peoples’ lives, which is why people need to get out and vote.

“People actually do have a strong voice, and strong political power over these initiatives,” Molina said.  “Your vote does count when it comes to passing propositions.”

Community Coalition has gone to great efforts to increase voters’ awareness on these propositions, and they have focused on the ones that affects South Los Angeles the most.

In 2012, Proposition 30 was approved by voters to raise funds for K-12 schools and California community colleges.  It increased income tax rates on high-income taxpayers.  This affects individuals with earnings over $250,000, joint filers over $500,000, and heads of household who earn more than $340,000.  These high-income taxpayers pay an extra one percent, two percent, or three percent tax, respectively, on their income.

When the measure was passed in 2012, these higher rates were supposed to be temporary, and are in effect through 2018.  This year’s state budget assumes that the Proposition 30 income tax increases will raise about $7 billion in revenue.

Proposition 55 will not increase taxes, but it will extend the Proposition 30 tax period through 2030, with revenues ranging from $4 billion to $9 billion each year, depending on the economy and the stock market.  Proposition 30 has raised roughly $6 billion per year since it was passed.

Slightly more than half of the state’s $122 billion budget is spent on education.  Eighty-nine percent of these increased tax revenues go to K-12 schools and 11 percent to California community colleges.  In certain years, some funds will go to healthcare.

“It’s helping to close the funding gap in education,” Molina said.  “We know that South L.A. schools need this money.  We know that if this initiative isn’t passed, there’s going to be a lot of defunding of programs.  The LAUSD is very concerned about it.”

According to Molina, South Los Angeles schools have benefited from the tax increase that Proposition 30 created, but more funds are needed.

“Especially for public education at this point, when there is an exodus of students out of South L.A. public schools into charter schools, we need that money to make our schools strong again,” she said.

Supporters of Proposition 55 say that it will prevent billions of dollars in budget cuts, which include teacher layoffs, and can restore arts and music programs, without raising taxes.  Supporters also say that it can make college more affordable.

Opponents of Proposition 55 say that Proposition 30 was presented as a temporary tax, and it should remain temporary.

Opponents believe that the higher taxes are not needed.  An argument is that California now has a balanced budget and reduced debt.  The state budget recovered from a $16 billion deficit in 2012 to a $2.7 billion surplus in 2016.

Opponents also point out that education spending has soared by $24.6 billion since 2012, a 52 percent increase.  They call for politicians to cut wasteful spending instead of continuing with this increased tax.

A yes on Proposition 56 will increase cigarette tax by $2.00 a pack, with equivalent increases on other tobacco products and electronic cigarettes containing nicotine.  Revenue from this tax could produce $1 billion to $1.4 billion annually, with the funds being used to augment spending on health care for low-income Californians.

Tobacco-related healthcare costs California taxpayers $3.5 billion annually, even for people who do not smoke.  Proposition 56 works like a user fee, taxing tobacco to help pay for smoking prevention and healthcare.  So smokers pay their fair share of their costs.

Community Coalition is in favor of this tax, and Molina believes that this could potentially decrease cigarette use.

“We know that by increasing the price of cigarettes, science and data tells us that smoking usage goes down,” she said.  “People smoke less when it’s more expensive.”

When initiative supporters gathered signatures to put this proposition on the ballot, many cigarette smokers put their name down.

“We had a lot of smokers sign it, saying that they were going to support it because they were like, ‘you know, at some I might need MediCal,’” Molina said.

Supporters of the measure point out that tobacco causes more deaths than guns, car accidents, HIV, alcohol, and illegal drugs combined, and that tobacco is the leading cause of preventable death.  They also believe that this proposition will decrease youth smokers.

Opponents of Proposition 56 do not believe that this tax increase is about helping people stop smoking.  They state that only 13 percent of the tax money that this measure will produce will go to treat smokers or stops children from starting.  They state that 82 percent of this tax money, $1 billion a year, goes to insurance companies and other wealthy special interests.

Proposition 57 will create opportunities for early parole for non-violent offenders, it will incentivize rehabilitation and education programs, and it will allow juvenile court judges to decide whether juveniles will be prosecuted as adults.

A yes on Proposition 57 would allow the state to consider early parole for non-violent offenders for good behavior and for completing rehabilitation and education classes.  It will increase the number of inmates eligible for parole consideration.  As of 2015, there were about 30,000 individuals in state prison who would be affected by the parole consideration provisions of this proposition.

Community Coalition is in favor of Proposition 57 because of the effect that it will have on minority communities.

“We feel that in South L.A. our incarceration rates are much higher than in other parts of the city,” Molina said.  “We know that our black and brown population is affected by mass incarceration and that it’s systematic.  We want to change that system and reform it so that we’re not putting people in prison, so that we put money toward prevention programs and toward education.  We’re giving people second chances, and giving them the resources that they need to take advantage of those second chances.”

Community Coalition also supports the way that this measure would affect minors.

“We want to create more due process,” Molina said.  “We believe it’s a form of giving our youth second chances.  A judge will be able to review the entire case and the history of that child.  Why is that child doing certain things?  We believe that kids just don’t belong in adult prison.”

Many minority families have been negatively affected by losing members to the prison system.

“We want people to come home to their families, and also have the services so that they won’t go back in,” Molina said.

Supporters of this measure believe that it will save tax payers billions of dollars.  They point out that over the last several decades, California’s prison population has exploded by 500 percent, and prison spending has ballooned to more than $10 billion every year.  This is going on while few inmates were rehabilitated and most re-offend after release, according to supporters of Proposition 57.

Supporters also point out that overcrowded and unconstitutional conditions led the U.S. Supreme Court to order the state to reduce its prison population.

This measure would legalize marijuana under state law for use by adults above 21 years old.  There would be local regulation and taxation on sales and cultivation.

Projected tax revenues range from hundreds of millions of dollars to over $1 billion annually, which would mostly be dedicated to support youth programs, environmental protection, and law enforcement.

This measure creates a safe, legal system for adult use of marijuana.  It controls, regulates and taxes the use of it.  Adults would be able to purchase marijuana at state-licensed businesses or through delivery services.  Businesses could generally not be located within 600 feet of a school, day care center, or youth center. Businesses selling marijuana could not sell tobacco or alcohol.

Smoking marijuana would be prohibited while driving a car, in any public place, or anywhere that smoking tobacco is not allowed.  It will also be against the law to have marijuana on school grounds or at youth centers.

This measure is designed to reduce various criminal justice costs.  This is primarily related to an expected decline in the number of offenders held in state prisons and county jails for growing and selling marijuana.

Community Coalition is against Proposition 64.

There is also a concern about how this will affect teenage users.

“We’re also very concerned for how youth of color, 21 years old and under, are going to be affected by this law,” Molina said.  “Because it doesn’t decriminalize it for them.  In Colorado, we saw the arrest rate for black youth under 18 years old go up by 58 percent after legalization for marijuana related possession and crimes.

“Just like there is underaged drinking, there will be underaged smoking, so it actually further criminalizes them.  Fifty-eight percent is a huge jump, and it actually went down for white youth by 10 percent.  For Latino youth it went up 30 percent.  And we saw an explosion in (school) suspension rates too.”

Supporters of Proposition 64 point out that marijuana is already available nearly everywhere in California, but without regulation.  They also point out that more than 8,800 felony arrests for growing or selling marijuana happen in California every year, resulting in long prison sentences in some cases, which can be viewed as a waste of law enforcement resources.

Opponents of this measure worry that legalizing marijuana could lead to more auto accidents, and that there will be no limits on the number of marijuana shops that can be opened in low income areas.

For more information on the election ballot, visit www.ballotpedia.org/California_elections,_2016