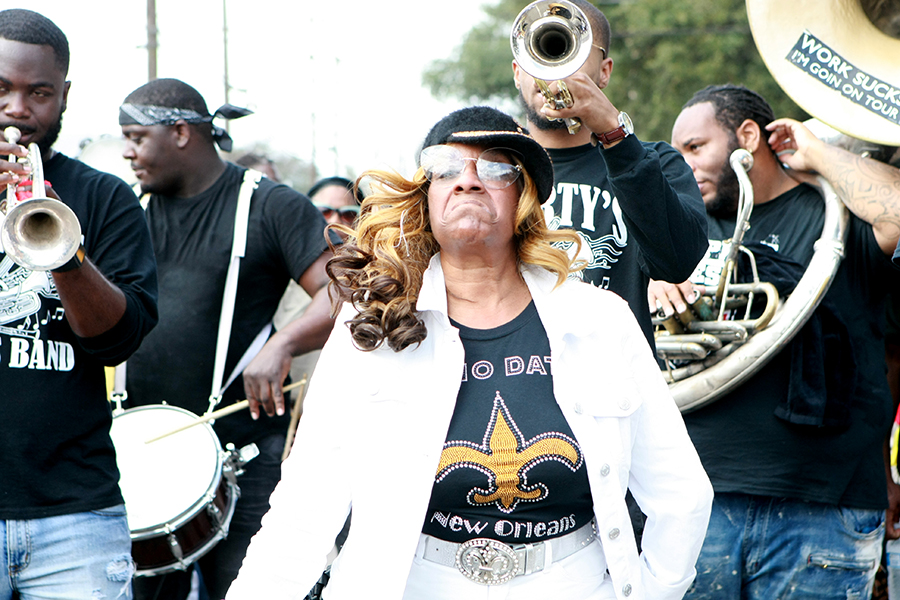 New Orleans is a fascinating city that has amazing Black culture; from music, to art, to food.  With roughly 60% of the city’s population being African American, Black culture strongly influences this city.  But many visitors may not be experiencing all that New Orleans has to offer.

The French Quarter is New Orlean’s most popular tourist destination, and people who are in town for music festivals or business conferences typically flock to Bourbon Street and other areas in downtown for entertainment.  The French Quarter is an amazing place to explore, but there is a lot of Black culture to see and experience outside of that area.  Luckily for tourists, the city is relatively small, so people do not have to travel very far to have amazing experiences around town.

New Orleans resident Mikhala Iversen showcases the city’s Black culture through the All Bout Dat Black Heritage & Jazz Tour of New Orleans (www.allboutdat.com).  One of the main stops on the tour is Tremé, America’s oldest Black neighborhood.  This area of New Orleans is the site of significant economic, cultural, political, and social events that have shaped the course of events in Black America.

Tremé is adjacent to the French Quarter, and it is the home of Congo Square, which is where enslaved Africans were allowed to gather on Sundays to play their drums, sing, dance, and trade their goods.  It is also the birthplace of jazz music.  Today there is a drum circle performance every Sunday.

“It’s sacred land,” Iversen said.  “It’s a very spiritual place.  One of the ways that our ancestors got through their trials and tribulations would be with music.  Black music wasn’t made to entertain anybody.  We created that to heal ourselves.”

While Iversen’s tour celebrates Black culture, it also touches on the struggles that African slaves and free Blacks experienced in this city.

“The tour consists of the story of slavery,” she said.  “The story of Jim Crow and Reconstruction.  The story of connecting the dots of the past and the present so that we can shape the future.  It’s not a political tour but it’s impossible to not touch on something that becomes politics when we talk about African American history, because so many things were put in place then that are still here today.”

Iversen highly recommends that people visit Bayou Road, which is just outside of Tremé and is on her tour.

“Bayou Road is our only Black owned business street,” she said.  “All of the shops and vendors there are Black owned.  The buildings are Black owned.  And I take my visitors to the Community Book Center, which is our hub for academics, literature, community events.  Visitors can purchase items that are not made in China, but made by local New Orleans artists.”

While driving through New Orleans, it’s easy to see how important art is to the city.  There are large murals on buildings that celebrate Black music and culture as well as depict political and social issues.

“The more challenges we have, the more art we create,” Iversen said.  “We need to communicate our frustrations and solutions, and our desire for community.”

One of the city’s great art exhibits is Studio Be in Bywater.  Housed in a large warehouse, local artist Brandan “Bmike” Odums’ murals are on display.  Odums painted large murals that feature African American icons such as Martin Luther King Jr., Coretta Scott King, Malcolm X, Muhammad Ali, James Baldwin, Angela Davis, Fannie Lou Hamer, Paul Robeson, Bob Marley, Jean Michel Basquiat, and many others.  This exhibit showcases the triumphs and struggles that Black people have experienced in this country.  Studio Be should be on every Black tourist’s list of things to see in New Orleans.

New Orleans is a performance city which doesn’t stand still.  Marching bands are all over the place, and they are known for the second line parade.

The parade is often seen at weddings, and many newly married couples will march through the French Quarter as a part of their reception.  The parades are typical in the French Quarter, but to have a real Black cultural experience, tourists attend the second line parades that are held in Black neighborhoods on Sundays.

Social clubs in various Black neighborhoods around the city hold their own parade, and it’s an amazing experience.  This is dramatically different from the typical parade where people sit on the sidewalk and watch floats go by.  These parades usually have a small marching band, a dancing group, and a couple cars.  That’s all they need to get the party going.  Instead of watching the parade go by, spectators march and dance along side the parade.  So people in attendance can actually be in the parade.  These parades are unbelievable spectacles.

Schedules for the various Sunday second line parades can be found on WWOZ New Orleans 90.7 FM’s website under the section, “Takin’ It to the Streets.”  Visit www.wwoz.org for parade times and routes.

New Orleans is one of the greatest food cities in the nation, and there are many Black-owned restaurants.  A Google search on “Black owned restaurants in New Orleans” will produce many great places to dine.  Dooky Chase Restaurant tops nearly every list.  Loretta’s Authentic Pralines, Lil’ Dizzy’s Cafe and Willie Mae’s Scotch House are also popular places.  Iversen recommends Coco Hut Caribbean Restaurant, the Half Shell on the Bayou, Morrow’s, Bayou Bistro, and The Munch Factory.  There are many more great Black-owned restaurants in the city.

New Orleans is a one of the most fascinating cities in the nation, and for Black travelers, experiencing the African American culture that New Orleans has to offer makes this cities one of the best places in the U.S. for Black people to visit.