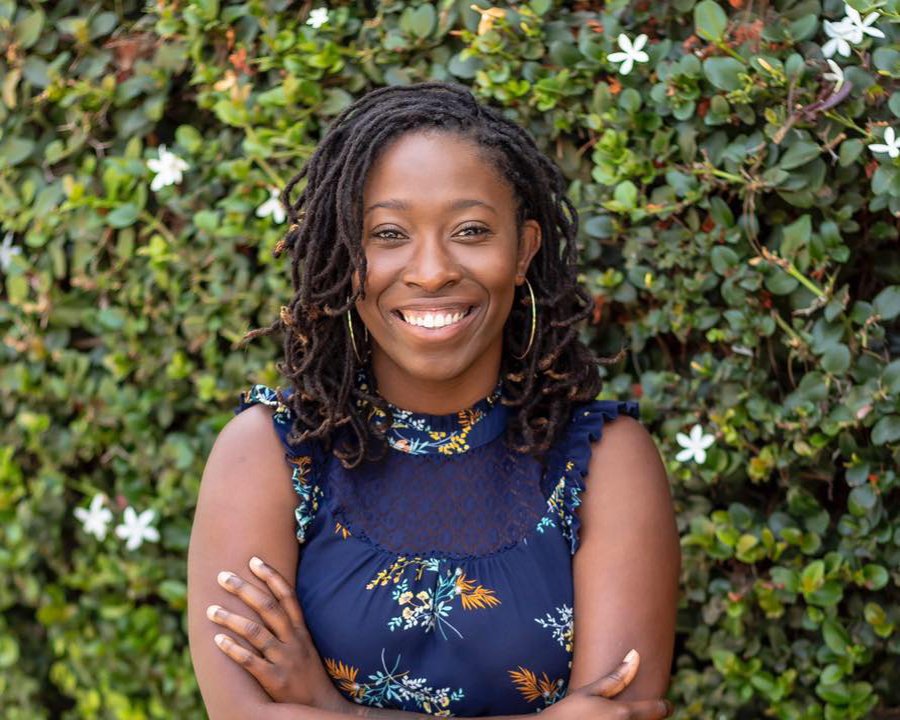 Terry’s company, ChargerHelp Inc., is building out an app that will facilitate on demand electric vehicle charging station maintenance.

Kameale C. Terry is excited.  And I don’t blame her.  Since the beginning of the New Year it’s been a whirlwind of activity for her; quitting her job at a company she worked hard to build out, and founding her own clean technology company, ChargerHelp, Inc.  She tells me with a chuckle that she never saw herself as an entrepreneur, as her father was one and observing him she thought, “That’s not fun.”

Yet here she is, the recent winner of StartUP Grind South L.A. for her novel idea, and working hard to build the dream out.  So yes, she’s excited; an excitement that only comes from the satisfaction one gets from finally realizing their mission in life.  I get the feeling that Terry is right where she’s supposed to be.

It’s fitting to be meeting Terry at LADWP’s La Kretz Innovation Campus in downtown Los Angeles.  The beautiful space serves as home to the Los Angeles Clean Tech Incubator, who’s mission is to help build an inclusive green economy, which is a mission that Terry identifies with.  She wants to make sure minority communities get their fair shake at the opportunities that are being ushered in by the increased focus on sustainability and green economies.  For her, that’s specifically focused on the electric vehicle economy.

Terry was born and raised in, as she puts it, “South Central, South Central,” in close proximity to the Slauson Swap Meet.  Her parents were immigrants from Belize; her mother a special education assistant, and her father an entrepreneur who started a network consulting business.  She realized early that she had to work hard for success, and used that drive to push herself forward.

Terry graduated from Azusa Pacific University with a degree in Organizational Leadership.  She always had a passion for understanding processes and how they work and can be used to help companies and individuals achieve their goals.  After college she took on many projects, which eventually led her to angel.co, a website that looks specifically for people who want to work for a startup.  Coming to the conclusion that she wanted to become part of the new tech economy, but just not sure in what capacity, she felt this was a good way to get her foot in the door and make some money.  Starting out as a simple customer service technician with a company called EV Connect, when she left she was the company’s Director of Programs.  Along the way, she gathered the experiences and knowledge that would eventually lead her to her own business.

Terry’s company, ChargerHelp Inc., is building out an app that will facilitate on demand electric vehicle charging station maintenance.  It’s an important but often unmentioned aspect of the new electric vehicle economy.   With electric vehicles (EVs) and hybrid electrical vehicles (HEVs) set to become over 40% of all vehicles sold by 2030, charging locations are becoming more important than ever.  As of today, the U.S. has close to 200,000 charging stations, and to keep up with even modest expectations of EV vehicles that will hit the road by 2030, the U.S. will need over 13 million more.  This creates a lot of opportunity.

“If you talk to your regular EV driver, they’ll tell you there’s been more than one time they’ve come to a station that didn’t work, or has been down for an extended time,” Terry said.

“But if there’s a station where you might just need to validate that there is an issue, or maybe you need to commission, or clean the station, it probably isn’t the best use of an electro contractors time,” Terry says.

The idea for this approach came to Terry while she was attending at a pitch contest.  She was brought in as a clean tech industry expert for the Startup Grind South Los Angeles contest at Vector90 in 2019.   Startup Grind is a competition where people can bring the genesis of an idea to a group, find people to help build it out, then pitch the idea before financial investors to get backing.  Terry was there to help anyone who had an idea in the clean tech space to formulate the idea further, but anyone could sign up with an idea to pitch.  She had been thinking for a while about how to explore opportunities for more diversity within clean tech workforce development, and an area of opportunity within the industry was with the maintenance of charging stations.

“I had always believed workforce development could utilize technology to help people to competitively enter the job market,” she said.  “So I was like it would be really cool to use maintenance as an opportunity to introduce folks from different communities into this industry.”

Terry decided to sign up and talk about the idea, and found that it resonated with the audience.  She was able to get some people behind her, pitched it on the last day, and won.

“I wasn’t even thinking then I could do my own company, but then I thought I might as well take a bet on myself,” she said.

And this is a huge space with a lot of opportunity.

Terry will tell you that being a Black woman starting her own business in an industry dominated by older White men isn’t easy, or new, but she credits many of those people for supporting her.

Terry says that people like her mentor Paul Francis, CEO of KIGT, really blazed the trail for minorities in the industry.  Having someone like that who came before and a strong support group to lean on are essentials for young entrepreneurs.

While Terry is focused on providing opportunities in the clean tech industry in the maintenance of EV stations, there are many ways to take advantage of opportunities opening up due to the EV economy.  An opportunity is in the owning of EV charging stations.

“This is one thing I’m really excited for our community to learn more about because there’s a huge opportunity where you can partake in the green economy,” she said.  “There are a lot of incentives available to help cover the cost of installing an EV station, and within our community we aren’t aware.  The barrier here is that people need to understand there’s money out there for them to use.  In 2020, there’s close to $2 billion dollars of infrastructure money coming into the marketplace nationally.  If you don’t take advantage of it now, it’s not going to be there.”

Companies like Southern California Edison, LADWP, and Grid Alternatives are just a few that have programs available for interested parties to look into.

Owning a charging station opens you up for even more opportunity, as something called Low Carbon Fuel Standard (LCFS) Credits present another way to produce revenue.  It’s a system that allows the owner to acquire credits based on the volume of kilowatts used during charging.  These LCFS credits can then be traded and sold like a stock for real money, or held as they increase in value.

“Clean tech companies are building and they are going to be the companies of the future,” Terry said.  “It’s like the time before social media, when Facebook and Instagram were in their baby phases, but now they’re so big it’s hard to get in.  Clean tech is the future, and it’s important to our overall livelihood.  I hope people continue to explore the many opportunities available to become a par of this ecosystem.”

Reach out to Terry directly at This email address is being protected from spambots. You need JavaScript enabled to view it..

TEC Leimert is a non-profit community organization dedicated to bridging the digital divide, close the wealth gap, and create social capital.  Learn more at www.tecleimert.com and follow them on social media.