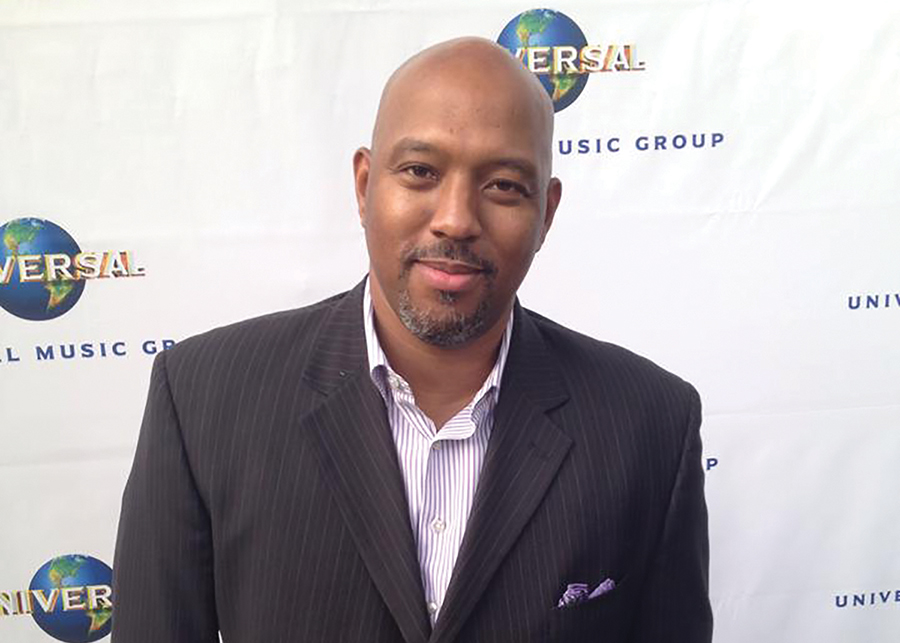 Technology has a major impact on the music industry, and it has helped Universal Music's Chris Ayears manage artists and get music to the masses.

Chris Ayears, the Director of Streaming for Universal Music, sits across the table from me at Hot & Cool Café in Leimert Park, beaming from ear to ear. I can immediately tell why he’s successful; he has a confident, easy demeanor, and a genuineness that says what you see is who he is, nothing’s hidden. In unassuming Los Angeles garb, trendy t-shirt, shorts, tennis shoes, and sunglasses, Chris is telling me about his recent trip to New Orleans, and the artist he manages Brian Courtney Wilson. Called the Donny Hathaway of gospel due to his soulful, loving voice, Wilson is on his fourth album and headlining his first multi-city tour. Managing talent isn’t part of Chris’ duties at Universal, but something he loves to do on his own, helping artists achieve their due. “I get so much joy from getting them opportunities and seeing them succeed,” Chris says. He seems fulfilled.

Born in Texas but raised in LA, Chris grew up during the musically influential 80’s, the best decade in music in Chris’ opinion, because “Every genre had stars and everyone listened to everything!” This era was a huge influence on Chris and he knew from an early age that he wanted to do something in music, but it wasn’t his first pursuit. After graduating from University High in Los Angeles, he received a football scholarship from Washington State, but unfortunately got hurt after his first year. This led him to transfer schools, heading to Morris Brown in Atlanta for two years before ending up at the University of North Texas.

While hosting a local video show shot on campus called ‘Just Loungin’’, he got his first start in music working for a radio station in Dallas. Chris was unaware of the process to get records played on the radio, thinking DJ’s just picked whatever they wanted, so it was interesting to see that music reps would come into the station and pitch their records to get them on the air. Fascinated by that process, Chris decided to look into it, and ended up with an internship at Virgin Records, working for the Southwest Region Rep Lue Calhoun. He would help set up pitches for artists like After 7, Janet Jackson, and Lenny Kravitz, to present to the program directors. “I was really interested in how she (Lue) would go about strategically putting programs together to try to influence these radio stations to play her records,” says Chris.

While interning Chris was still at the University of North Texas finishing school, but he was at the label all the time and became known for his work ethic. When an entry level position became available with EMI as a field marketing rep, it was offered to him but with a caveat, they made him promise to finish school.

“I had expressed how important it was to me (to graduate), so they wanted to make sure I did. I said I only had a couple of classes left, I only have night classes left, I can do it. I was lying, I had like a full load, but I wanted the job. Had to change my whole schedule,” Chris recalls. The position he took as a field marketing rep required him to be on the road all over the southwest most days of the week, implementing positioning campaigns, and making sure the records were priced the right way, all while finishing up his courses. “I just had to grind it out, but I did graduate cause I had to make that happen.”

Chris went from EMI, to Virgin, then took a position at Universal Music where he has been pretty much ever since, except for a stop at Music World. Chris has always had a passion for managing, starting unofficially with his friends around the way. “Instead of being a rapper, I was the one trying to manage the rappers, and trying to manage the homies that were in dance groups,” he says. He got his first official opportunity when he took the Vice President of Management position with Music World, Matthew Knowles’ label, and was able to work with some fantastic gospel artists. Eventually, he found his way back to Universal Music and his current position.

Chris says that the Director of Streaming position is similar to those sales jobs back in the day when he was interning. Their job was to go to the radio stations and talk to the program directors and try to get the records played. Now he partners with his labels to find what their priority song is for a project, gets all the marketing, advertising, and touring information, and pitches it to the streaming partners to get those records positioned on certain playlists he think would make sense for the record.

Chris says tech innovation has had a serious impact on the music industry. Since the decline of CD’s due to the introduction of Napster and peer to peer sharing, the industry is primarily concentrating on streaming and all of the platforms where consumers can consume music.

“So analysis is a huge part of our business now. We can’t just go up to Spotify or any of our streaming partners for instance, and say ‘Hey, this record is dope we want you to put it on Rap Caviar’. It’s not that easy. You have to show information on why that record makes sense on a playlist for one, then show the partner what we’re doing as a label to drive fans to the playlist. The editors want to help our records but their main priority is building the listeners on their playlists. So you have to show them why your record will help them meet their goals,” Chris says.

Part of that process is proving there’s a demand for the record by showing it has active streams, a term used to define the action of consumers actually going to a platform, searching for a specific record, clicking on it and saving to their collection, not just hearing it as part of a playlist, that’s called passive streams. Active streams drive consumers to a playlist therefore helping the playlist.

For new artists, Chris says YouTube and SoundCloud are the most common places for discovery. “The days of finding new artists on the block, the hottest rapper on the street, or the best singer…catching someone at a talent show, those days are pretty much obsolete,” Chris states. The record labels and A&R departments will scour the Internet, checking these platforms looking at people’s views, and their engagement. It’s all based on metrics now. “So if you’re a SoundCloud artist and you’re already getting…whatever they consider to be a strong number of streams as an independent artist with no major backing, no major money…they are jumping on that, and trying to partner with artist like that cause they know these artists already have a following.”   With everything being so digital, Chris advises that new artists look to build their own following first, build a community, and build your brand. Similar to what Cash Money and No Limit did in the ‘90’s. They created and cultivated the demand and the labels came to them.

“I always tell young artists,” Chris says, “They say ‘Yo, I can sing,” well, how many fans you have? How many people will pay to see you perform? How many records you putting out? How many Spotify followers do you have? How many songs are you posting? It’s so easy now, not easy from a creative standpoint, but easy once you’ve made the record to get it out to the world. Then it’s the old school model, beating the streets, meeting people, shaking hands, really being active on your socials as well as letting people know that you have music cause you have to get people to the music. That’s all you can do, then they either fall in love with it and you know you’ve got something or you have to adjust and keep grinding… now you have to kind of show and prove before you can get a shot. Which is best because once you show and prove and the labels come knocking…if you decide to go with them, you start with the leverage.”

For individuals looking to work behind the scenes, it’s imperative to know all you can about how to navigate the digital world to broaden an artist’s reach. “That landscape is so broad, it’s not just about posting something, but how do you post it, when do you post it? Really learning as much as you can about all the information you can gather from a digital standpoint and how you can apply that to elevating your artists,” Chris says. This is where a degree in music can be invaluable, as the courses you’ll learn run the gamut of the industry. Digital marketing, all about the streaming partner ecosystem, advertising, publicity, skills all transferable to other fields but Chris stresses that the digital aspect of these fields is essential if you want to work in the industry.

“Getting in the door is the first step, and the way to get in the door sometimes is being able to speak the language, know the answer to certain questions,” Chris states. “When you have that degree, and it’s specific to music, and you walk into Warner Bros., Universal, or Sony, and you can [show] them that you speak the language, that can be incredibly helpful.”

Chris has had a long career in the music business, something that is not as common as you might think. He contributes his success to hard work and a lot of help from the Man upstairs. “I know I’ve survived in this industry for this long strictly by the grace of God, He’s helped foster my career, and has directed my career path from day one.”

As he looks back on that career, what gives him the most pleasure is the fact that he was able to help many people get into the industry. “I was in Dallas for a good stretch of my career, like 10 years, “ he says. “Cause, like I said, you need to get your foot in the door, and as the industry became more digital, those entry-level positions started going away and it became about who you knew…and I helped a gang of people get in the door.”

“My legacy…will be that I was in the industry for a long time, in the background. I had integrity in it, never was caught up in any kind of drama or scandal, and I never did anybody dirty. I never stepped on anybody’s toes to get promoted, and I helped every person I could…and I’m ok with that.”