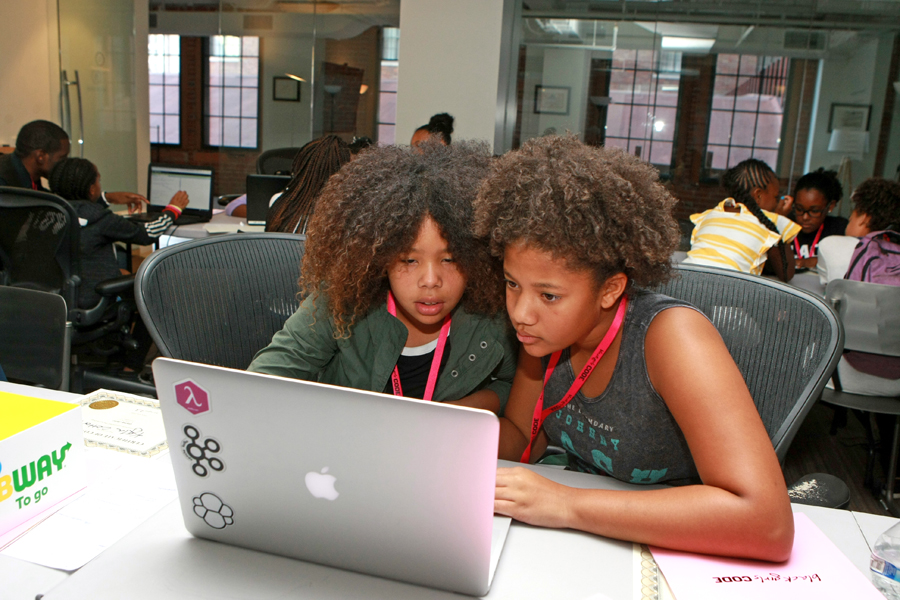 Community groups are working to encourage children to enter the STEM fields.

African Americans account for 13 percent of the United States population, but less than five percent of the jobs in the STEM (science, technology, engineering, math) fields.  This is a major issue because the advances in technology have dramatically changed the workforce over the last couple of decades, and the jobs of today will be different from the jobs of tomorrow.

To ensure that African-American children can have a chance in the present and future job markets, many community organizations have created programs that equip students with the skills that they will need to succeed.  As local communities take a more active approach to STEM, there is a growing number of South Los Angeles children who are catching this technology wave.

Darin Gray, an African-American engineer and the director of the USC Viterbi School of Engineering, spoke to a group of middle school and high school students at the 2017 Sigma Youth Symposium, which was hosted by Southern California chapters of Sigma Gamma Rho Sorority, Inc.

“We want you to start thinking about the jobs, and the careers, that don’t yet exist,” he said.  “When I was here (as a student at USC) back in the ‘80s, there was no Facebook, there was no Google, there was no Snapchat.  None of those companies existed.  Those (tech) jobs did not exist.”

Gray went on to inform the students that 70 percent of the current jobs will not be here in the future because people will be replaced by robots or automated systems.  Driverless cars are being created and fast-food restaurants are using automated systems instead of cashiers.  The advances of technology will mean that students who earn college degrees from STEM majors will be in high demand.  He also pointed out that there is already a shortage of STEM workers, so there are many jobs available.

“Jobs are coming back, but the jobs that left are not coming back,” he said.  “We have entire factories that are run by robots.  We don’t need people in those factories.  In fact, people make things less productive.  In the job that you want, you won’t be fixing the robots, you’ll be programming (coding) the robot that goes and fixes the robots in 18 different factories.”

Computer programming, or coding, is a technical skill that many people think of in terms of video games and animated movies.  But coding actually touches nearly every aspect of life.  Cell phones, computers, the Internet, televisions, automobiles, security systems, and basic utilities such as water and power, all use some type of computer code to operate.

While the job market is becoming more technical, the African Americans who are succeeding in STEM fields are only seeing a few black faces.  That was Kimberly Bryant’s experience as she pursued a degree in electrical engineering.  She felt culturally isolated.  As she progressed through her career, she felt that the absence of African Americans, especially women, was not because of a lack of interest in those fields, but because of a lack of access and a lack of exposure to STEM topics.  Because of this, she launched Black Girls Code to provide young girls the opportunities to learn in-demand skills in technology and computer programming.

“We are changing the face of technology,” said Amber Morse, West Coast coordinator for Black Girls Code.  “We want to see more girls in the space of technology, science, and engineering.  We’re exposing them to great opportunities.  We’re showing them that this is cool, and that there are people who look like them in this field, who will support them.”

The Los Angeles chapter of Black Girls Code recently held a workshop in downtown, where the students participated in coding, app development, and robotic workshops.

Historically, many parents have chosen art programs for their children’s extracurricular activities.  With computer programming, there are many ways for children to cultivate their artistic abilities.

“There’s a lot of art in reference to STEM,” Morse said.  “The design, the structure, the layout, the colors that are chosen, and the textures.”

DeShon Andrews, who is a mentor with the Alpha Esquires, which is a mentoring group of Alpha Phi Alpha Fraternity, Inc. Beta Psi Lambda Chapter in Los Angeles, has witnessed his students become literate in coding.

“It was fascinating on how fast the kids could get it,” he said.  Something as simple as making a ball move on a screen took a lot of coding.  Then the color, the speed, the shape, and the size.  And there was a lot of math involved.”

The Alpha Esquires, which is a program for middle school and high school boys, attends engineering workshops at UCLA, and they hold their code-writing classes at the L.A. Alpha House and Crenshaw High School.  Code-writing was added to the Alpha Esquires’ curriculum because of the changing job market.

“It’s important because these are the jobs where the money is at,” Andrews said.  “We want to put our kids on an even playing field.  Technology has taken over the world.”

While some of the students like the classes because they can create games, other students are seeing possible careers opportunities.

“One of the kids (who is a football player) said that, ‘Not everybody can make it as an athlete in the NFL, but everybody should be able to contribute something to the profession.’  That student’s contribution is that if he can’t make it as a professional athlete, he’ll fall back on the skills that he’s learning through code writing.  Whether it’s real-time data analysis, gathering statistics, or providing information at a high rate of speed.  So he’s really got it.  He’s transitioned his mindset from being able to run with a football to being able to write programs to assist the NFL.”

Bethany Baptist Church of West Los Angeles, located in Crenshaw Manor, is also promoting STEM fields to children in their community.  They partnered with UCLA Center X, which is an organization that prepares and supports K-12 teachers and administrators committed to social justice, instructional excellence, and the integration of research in urban schools, to create the Launch Academy, which is designed to make math and science fun.

“This program is important, because our children do not get the advantage of STEM programs,” said Michelle Washington, Education Program Coordinator at the Bethany Baptist Church Community Development Corporation.  “You see those programs offered in higher (income) areas.  This program allows our children to know that they are just as good.  That they can be a scientist, a bio-chemist, that they can go into engineering.  You can be from South L.A., you can be from Compton, you can have one parent in the home, and you can still be involved in those type of things.  It’s not just an Asian thing, or a Caucasian thing.  It’s an everybody thing.”

At UCLA, and other universities around the nation, there is a push for diversity in the STEM majors.

“I am in the sciences and I interact with many graduate students at UCLA, and many professors in the sciences,” said Lynn Kim-John Ed.D., director of science programs at UCLA Center X.  “When you walk the campus, it’s very noticeable that there is not enough diversity on that part of the campus.  This has become a mission for me as a director of science programs at UCLA, to work with teachers to inspire their children to want to go into sciences.”

“In our experiences and research, there’s only a few ways to bridge this wealth gap,” said Rashidi Jones, co-founder of the conference.  “You look at urban communities from an economic standpoint; the impoverished side of that, we see technology as being one of those vehicles to bridge that gap.”

TEC launched its first conference this past July in the Leimert Park Village, and it will be held annually in February.  There will be workshops on the power of imagery in media, the basics of social media, film finance and strategy, the future of virtual reality, digital marketing, and branding in the digital era.

TEC will host a five-week coding class for middle school students in December.

Dorsey High School is also preparing students for careers in technology.  Two of their baseball players who have been featured as the L.A. Standard’s Outstanding Student Athletes have excelled on the school’s robotics team.  On the robotics team they built robots and learned coding.  The codes that they learned are used to make the robots move.

Christopher Floyd is currently a freshman at Alabama A&M, where he is majoring in mechanical engineering.

“I like cars,” he said.  “I want to design them, and find ways to make them go faster.”

Kyle LaFlora, who is a senior at Dorsey, wants to attend Grambling State and eventually work for NASA.

LaFlora has also participated in the coding workshops with Mother of Many, which is a grassroots nonprofit organization that is “developing technology geniuses.”  The organization hosts classes at local schools such as Crenshaw High School and Dorsey High School.

While African Americans are not well represented in STEM industries, there is a push by parents in black communities to change that.

“As a parent, your number one job is to provide resources and opportunities for your child to be successful and live a good life,” said Jamin Butler, who’s middle-school daughter attended the recent Black Girls Code workshop.  “In today’s world, the most in demand skills are technical skills.  Specifically those in STEM majors.

For more information about Black Girls Code, visit www.blackgirlscode.com.  Sign up for their mailing list to find out about upcoming events.  Also, they will hold a Women of Color in STEM panel discussion on December 2 at USC.

For more information about the Alpha Esquires, visit www.alphaesquires.com.

For more information about Bethany Baptist Church of West L.A., contact them at (323) 296-7223, or visit their website at www.bethanywla.com.

For more information about TEC Leimert, visit their website at www.tecyoself.com

For more information about Mother of Many, visit www.motherofmany.com

Please let us know about other STEM programs in the community.  Email This email address is being protected from spambots. You need JavaScript enabled to view it.