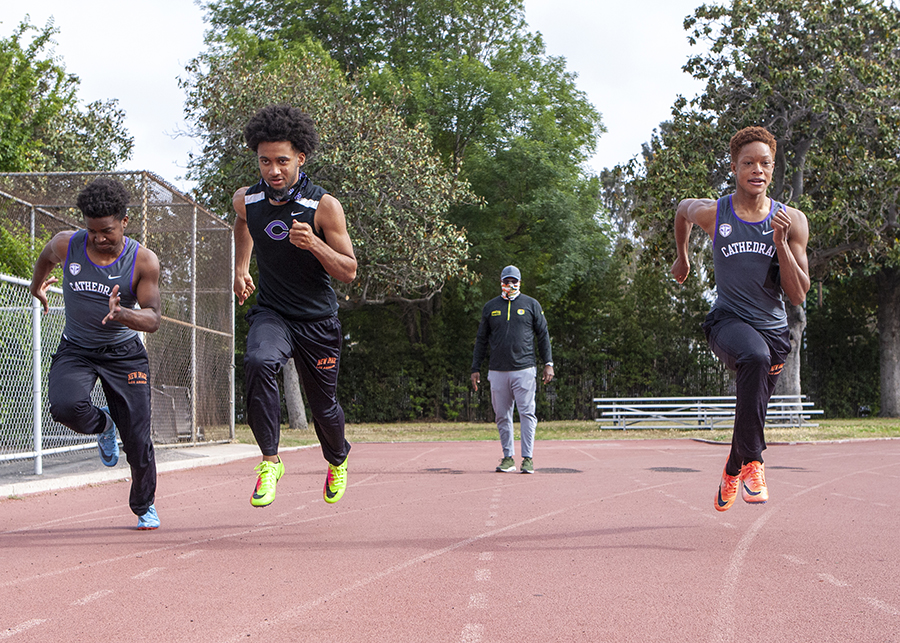 Cathedral High School’s track team has been a dominant force at the most prestigious track and field meets in California.  Coming out of this year’s Arcadia Invitational, they have the national leading time in the 800-meter sprint medley relay (100 meters, 100 meters, 200 meters, and 400 meters) and the state leading time in the 4 x 200-meter relay.

Cathedral High School was one of the favorites to win the CIF State track and field title, but unfortunately it was canceled due to the COVID-19 pandemic.  While the pandemic has limited high school sports, head coach Christopher Mack has found unconventional ways to keep his team highly competitive.

“It’s been a rough track season with all of the COVID restrictions,” he said.  “Since the end of last season, we had to run in a lot of out of state meets to prepare for the track season.”

“Most of our races, he’s right there next to me,” Allison said in reference to Mullens.  “When I see him going faster, it pushes me to go faster too.”

Both of them, along with Taylor, junior Ekene Onwaeze, and senior Steven Marks, are extremely happy to have national and state leading times.

“It feels really great,” Mullen said.  “It feels like we’ve accomplished something that most kids want to do.  It shows that the hard work means something.”

“It gives us something to continue working harder for because other teams are going to be coming for our times,” Allison said.  “So we just have to keep pushing to be better.”

The relay teams also features Gustavo Orendain, who runs the 400-meter dash and the 800-meter dash.

Cathedral has one of the top freshman 800-meter runners in Ambodai Ligon.

In previous seasons, Cathedral’s track team has competed in the Penn Relays, Mt. Sac Invitational, Pasadena Relays, and California Relays.  While this season has been shortened and Mack has had to modify his training program, the boys are still performing at a high level.

Mack’s training methods aren’t simply to push his athletes harder, but he teaches them to run smarter.

“I’m a very scientific coach,” he said.  “I teach them to be efficient, and use their speed and power in an intelligent fashion when they’re running.  I work on the biomechanics of sprinting.  Like, how their body is positioned when their foot hits the ground.  When we’re working out, I incorporate days where we just work on their form and technique.”

Mack doesn’t have one set program that he gives to all of his athletes.

“Each athlete — their body type, composition, and their muscle fibers — is different,” he said.  “When you’re coaching, you have to apply the right energy system to the athlete.  Whatever their muscle fibers dictate, that’s where you need to train them at.  I customize the workouts and the training to that particular athlete.  I don’t train athletes in a blanket type training.  I work with them where they are, so I try to fit the program to their need assessment.  I improve on their weaknesses and I make their strengths better.”