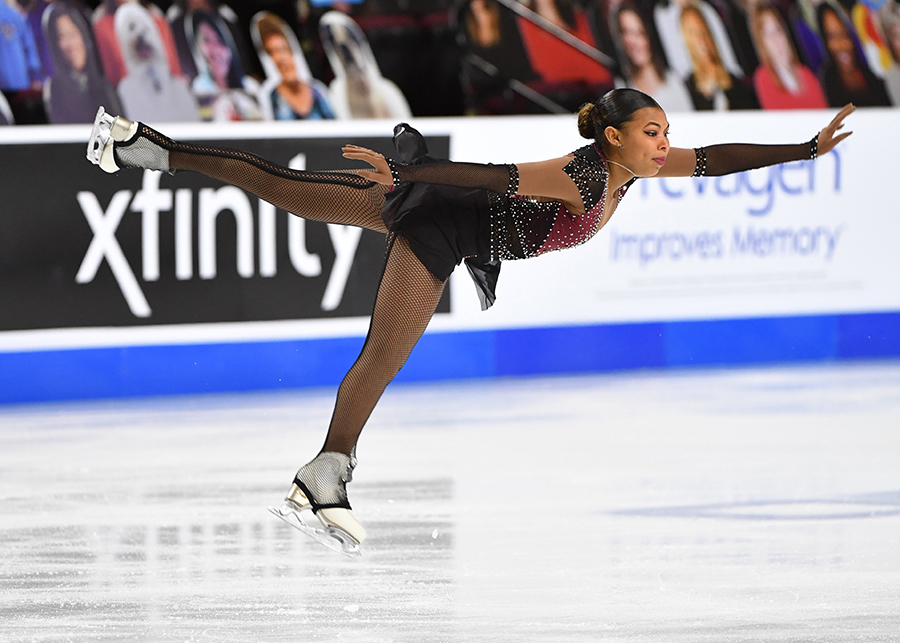 The Baldwin Hills and Inglewood native’s “Black Like Me” and “Whip My Hair” performance videos have gone viral on social media.  She recently was named the first recipient of the $25,000 Mabel Fairbanks Skatingly Yours Fund.

The major story of this past year is the social justice movement, and like many young Black adults, figure skater Starr Jones has used her platform to showcase her pride in Black culture and to show that she is a part of the movement for equal justice.

Andrew’s performance to Mickey Guyton’s “Black Like Me” song has gone viral on social media, and she was thinking about the social justice movement as she created it.

“The performance was based on what Black people have been going through,” Andrews said.  “I did that program to bring awareness.  I chose the song 'Black like Me' because there aren’t a lot of skaters who are Black like me in the sport, so I thought that program was very important to bring awareness to that.  When I was doing that program, the thought of equal rights and social injustice was always in the back of my mind.”

The reaction from social media commenters were very positive, with many people who do not typically follow figure skating falling in love with the performance.

This isn’t the first time Andrews, who is 19 years old, has gone viral.  She performed to Willow Smith’s “Whip My Hair” when Andrews was nine years old.  That video has been viewed over 56 million times on her YouTube page.

Andrews started ice skating before she turned four years old.  She was inspired by her mother Toshawa, who learned how to ice skate as an adult.

“When I saw her skate I wanted to try it,” Andrews said.  “And I’ve been skating ever since.”

For many people, learning how to ice skate can be difficult and intimidating, but that wasn’t the case for a young Andrews, who learned how to skate at the Culver Ice Arena, which is no longer in business.

“I picked it up instantly and it was really fun,” she said.  “I was skating really fast all the time because I liked how the speed felt with the wind in my face.”

Andrews became a competitive youth skater around the age of nine years old.  Early on skating wasn’t the challenging part for her, but finding confidence at a young age was.

“One of my toughest challenges was being doubtful of myself,” she said.  “I feel like that held me back.  I think that once I got over doubting myself and trusting my abilities and my training, a lot changed.  My practice ethics and the results in my competitions changed after I stopped doubting myself.”

Andrews skates for three hours a day, and she thoroughly enjoys choreographing her programs.

“My favorite part of the year is when I get new programs,” she said.  “When I pick a song that I really want to skate to, I’ll have fun skating to the song all year.  It doesn’t matter how many times I hear it.  Every time I do the program I smile, have fun, and I feel really free.”

Andrews goal is to skate in the Olympics, and after that there are several different paths that the skills that she’s learned in the sport can lead her down.

“This sport has a lot of sides to it,” she said.  “The acting part in programs; when I do a new program and have to play a new character, that’s all acting, so I feel that it can take me in that direction.  At the same time, I really do love singing, and I have sang in some of my programs in the past.”

Andrews incorporates ballet and various forms of dance into her routines.

“One year I had an African type program, and I took African dance classes just so that the movements were very authentic,” she said.

One great thing about this sport is the international travel, and Andrews’ passport is already filled with stamps from around the world.  Her favorite foreign country is Japan.

“Everything is so aesthetically pleasing,” she said.  “Just to look out the window, it’s so beautiful.  And the food is amazing.”

Figure skating is an expensive sport.  Fortunately for Andrews, she was recently named the inaugural recipient of the Mabel Fairbanks Skatingly Yours Fund.  The $25,000 fund will support the training and development of promising figure skaters who are Black, Indigenous and People of Color (BIPOC).  This year, U.S. Figure Skating corporate partner Guaranteed Rate has matched the award (for a total of $50,000) as part of its commitment to identify opportunities to enhance U.S. Figure Skating’s Diversity, Equity and Inclusion initiatives.  The Fund was made possible through a generous lead gift by the Lisa McGraw Figure Skating Foundation.

Affectionately known as the “grand dame” of Black figure skating, Fairbanks began figure skating in the mid-1920s when she was a child, and she became the first Black member of the U.S. Figure Skating Hall of Fame in 1997.  Motivated by her passion for the sport, Fairbanks worked to shatter race barriers at a time when racial segregation was not only tolerated, but the law in many states.

“Mabel Fairbanks is a very important person in skating,” Andrews said.  “She paved the way for a lot of people of color to skate.  So I think that she’s an amazing person and I can’t imagine the things that she went through, especially during the times that she was skating.  This fund, I’m incredibly honored to be the first recipient of this award.  Just to have an award in her name is amazing.  This will allow me to have more ice time, more lessons, more private ballet lessons, more pilates.  It will open up a lot more resources for me.”

“They are very strong women, and I know that they have also gone through social injustice in their sport,” Andrews said.  “I just think that they’re amazing.  Everything that they’ve done and all of their accomplishments, they’re just super inspiring.  They keep fighting no matter what.  I would love to be a person that people look up to, and they say that I was a person that fought for everything.  I just want to be an inspiration for people who think that they can’t do it, because I know they can.  They just have to keep fighting.”