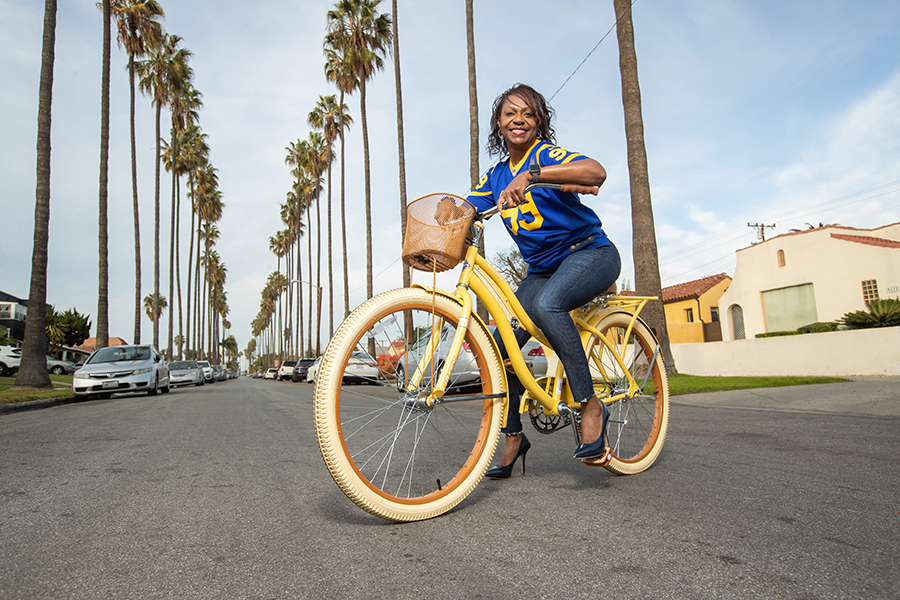 The Los Angeles Rams have very passionate fans, and they’re showcasing that passion and the culture of Los Angeles through a photo series: Faces of the Rams House.

Rams team photographer Jeff Lewis, who grew up in Mid City and currently resides in View Park, photographs Rams fans in their neighborhood.

“We’re showing off how beautiful this neighborhood is,” Lewis said.

Ransom is an ideal candidate for this photoshoot.

“I’m a die-hard Rams fan, and I joined the Rams fan club when the Rams came back to Los Angeles,” she said.  “I shared season tickets the first season with a friend of mine, and then after that I got my own tickets.  In the new stadium I have three seats and I’m so excited.”

Ransom is a football fanatic, and she has her game day rituals like many fans.

“Every Sunday, whether the Rams are playing or not, I’m watching football from the morning to the evening,” she said.  “Including Monday nights and Thursday nights.  But when the Rams play, I get all decked out in my Rams gear and I ride my Rams bike.”

There’s one simple qualification to be a part of this feature.

“You first have to be a die-hard Rams fan,” Lewis said.

For more information, visit the Rams’ website at www.therams.com