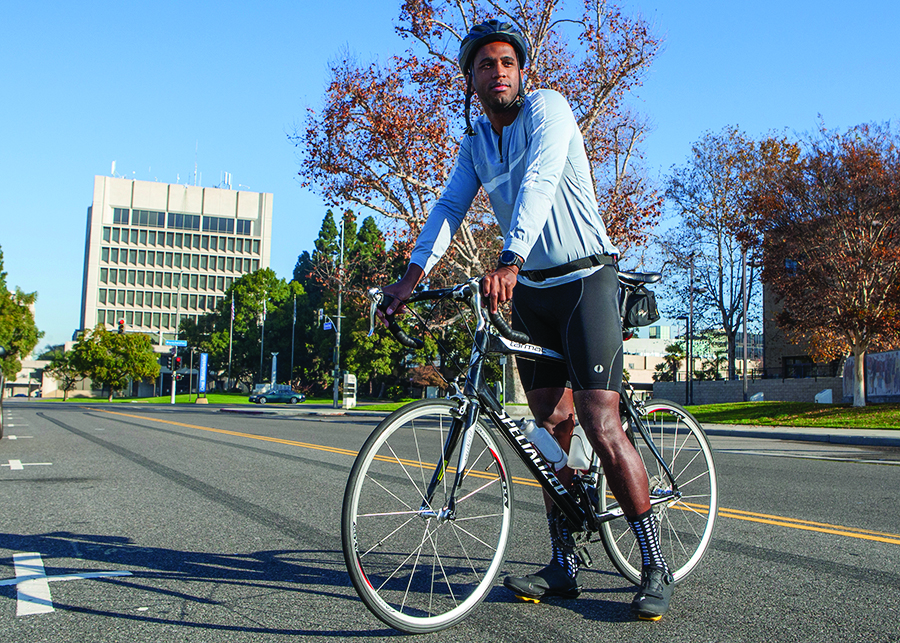 Hunter isn’t staying in one lane, and he’s bringing a lot of Black folks on his journey.

Jordan Hunter has a wide range of talents.  Athletically he’s been swimming his entire life, and he is also a distance runner and cyclist who competes in triathlons.  Outside of sports he is an actor who has his own podcast.  He doesn’t stay in one lane, and he’s sharing his gifts with others.

Hunter created Say it Loud Media, and he also created a triathlon that features Black competitors.

Hunter’s first love is swimming, which he started at 18 months old in his hometown of Phoenix, Arizona.  He started competing in the sport at four years old, and he was a varsity swimmer all four years of high school.  After graduating, he enlisted in the United States Navy, where his swimming abilities came in handy as he performed search and rescue missions for six years.

“I used to fly in helicopters and we did a lot of training missions overland and overwater,” he said.

Hunter has been in the Los Angeles area for the last three years.  He’s currently an Inglewood resident, and as a swimming instructor, he’s working to change the stereotype that Black people cannot swim.

“A lot of it goes back to systematic suppression in neighborhoods,” he said.  “We weren’t given pools, and the pools that we were given, they were poorly managed.  So a lot of times the opportunities to learn how to swim weren’t given to us.”

“We’re given more basketball courts and more open fields in neighborhoods that are Black and Latino,” he said.  “Why not swimming pools?”

Before the COVID-19 pandemic, Hunter would offer swimming lessons at public swimming pools.  Now he gives lessons at private homes and apartment complexes.  He believes that parents should not only have their children learn how to swim for recreational purposes, but also to avoid safety issues.

“Parents don’t have to have that fear all the time of their kid falling into the water,” he said.  “A parent is still going to be scared, but they don’t have to be traumatized about water and getting a pool one day because their child knows how to swim.”

Hunter also offers swimming lessons for adults, and he said that his oldest client was a 76-year-old woman who had never learned how to swim.  He has also taught children with special needs.

As people age, getting in the pool can be greatly beneficial as a form of exercise.

“For runners, you understand that you’re hitting concrete all day,” Hunter said.  “You feel good, but it’s high impact, so it takes a toll on your knees.  When you’re in the water, you’re not impacting anything.  When you get in the water, it’s an endurance sport, and it becomes mental.  The more you’re able to control your cadence, you’re able to bring your anxiety down, and bring your stress level down.  It opens up your lungs and your endurance becomes greater.  The more that I work with people in the pool, the more that I see them becoming comfortable.”

While Hunter loves to be in the water, he is also an avid runner and cyclist, which led him to running triathlons.  An Olympic distance triathlon is a three stage race that includes a one-mile swim, 25 mile bike ride, and 10K (6.2 miles) run.

The triathlon that was created through Say it Loud Media gave people an option to compete in an Olympic triathlon; a sprint distance triathlon, which is a little shorter; and the single legs of the triathlon.  So people who did not want to swim could simply do the bike and running portions, or just do one of the three legs of the race.

The COVID-19 pandemic has slowed Hunter’s plans to some degree, but he is still planning the next triathlon, and he’s still teaching people how to swim.  Follow him on Instagram at @boogiedebeast.  Visit Say it Loud Media’s website at www.sayitloudmedia.org and follow them on Instagram.