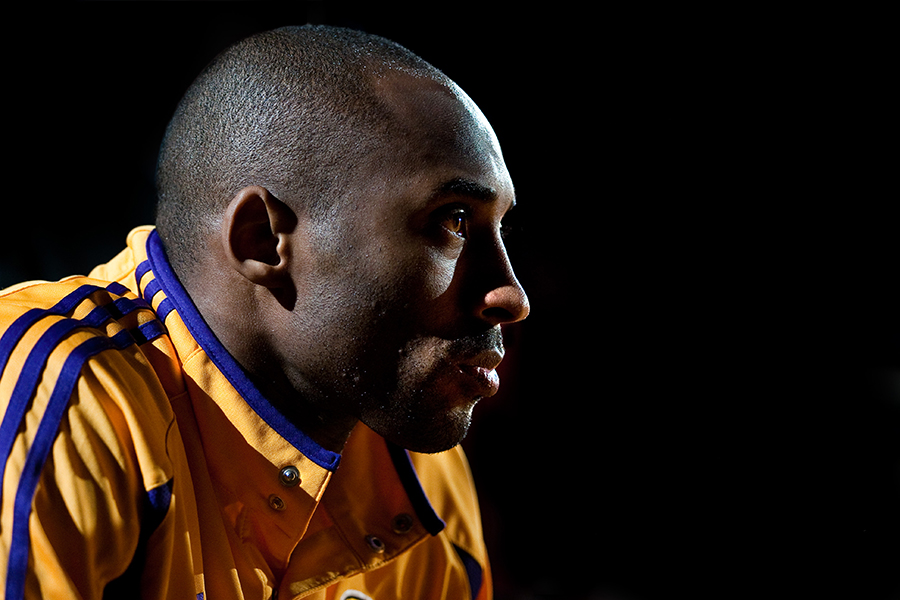 Sports photographer Jeff Lewis would sit near the Lakers bench during player introductions to capture amazing shots of a focused Kobe Bryant.

Inspiring, relentless, amazing, focused, legendary. These are words that I would use to describe Kobe Bryant. From 2004 until the end of his career and beyond, Kobe Bryant has been a part of my professional sports photography career. From sitting on the court every night at Laker games, we developed a relationship that found me working with him on several projects from Mamba Academy to his Wizenard Series of books once he retired from the NBA.

As a sports photographer, my job is to observe and learn my subject in order to make a dynamic image. Those who observed Kobe from the court saw an athlete who was driven in a very unique way and I sought to capture this drive. During player introductions, he would sit on the bench as the last to have his name called, focusing on the task at hand. I would position myself near the Laker bench to try to capture him in a way to show this emotion and this turned into a nightly ritual.

On the court, Kobe was the show. Game got out of hand, pass it to Kobe and the Lakers win. Lakers down by 20 in the first quarter, Kobe shoots every shot, scores 81 points, Lakers win. Playoffs? Championships? The guy was driven beyond belief and I had the privilege to capture it all from the 81-point game to two NBA championships followed by parades down Figueroa.

Beyond basketball, Kobe had a huge heart and wanted to help people, especially kids. It was an honor to be requested to photograph all the marketing images for his book series and to also photograph him at Mamba Sports Academy. From these shoots, Kobe the player became Kobe the mentor. We would talk about drive, focus, and family but he wouldn’t preach, just be the example. He even helped me pick a 10-year anniversary gift for my wife.

My career is forever changed, not just by the passing of Kobe Bryant but by the messages he instilled in me from the beginning to today. Live your dreams is one of the last things he told me but he also set examples of being focused and not worrying about things that don’t help you win.

Kobe Bryant spent every day at the end of his life focused on inspiring the next generation of athletes and it’s up to us to keep that spirit moving forward.