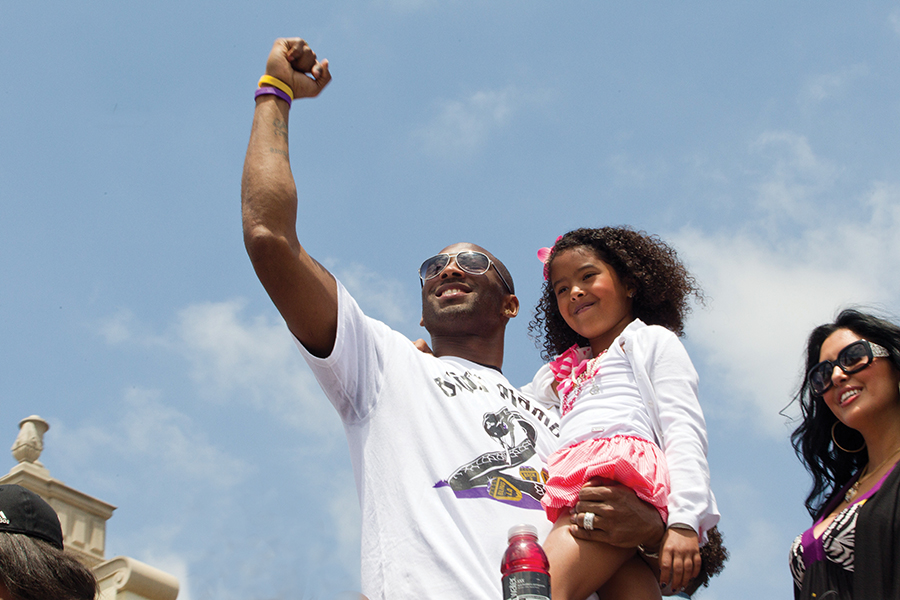 We can all learn a lot about finding our passion, working hard to become excellent at it, and mending relationships from the life of Kobe Bryant.

As we continue to mourn and celebrate the extraordinary life of NBA, Lakers, and Los Angeles superstar and icon Kobe Bryant, we can and should incorporate aspects of his Mamba Mentality into our own lives.

Thankfully, Bryant spoke about Mamba Mentality often, so we’re all just a Google search away from accessing videos of him speaking about finding a passion, and working hard to cultivate it.

“The lesson I cherish the most is how important it is to love what you do,” he said.  “If you love what you do, and it’s making you happy, all of the hard work and perseverance will pay off.  I once had a guidance counselor tell me that I shouldn’t play basketball and that I would never amount to anything from it.  His negativity toward me made me stronger.  You can’t stop people from limiting your dreams, but you can stop it from becoming your reality.  Your dreams are up to you.  I encourage you to always be curious.  Always seek out things you love.  And always work hard once you find it.  With that, I’ll let you carry on with your evening.  Please know that I’m thinking of you, supporting you, and encouraging you, always.  Peace.”

During Bryant’s playing career, he came off as being difficult to work with.  He was labeled as being selfish, but it was really because he not only demanded excellence out of himself, but he also demanded that out of everybody around him.  That included players, coaches, people working in the Lakers front office, media members, etc.  Anybody working with him, he expected them to be excellent at whatever they were doing.

We should all ask ourselves a few questions.  Are we doing what we truly want to be doing?  Are we living out our dreams?  Are we putting in the work to be excellent at whatever we’re doing?  Are we the best version of ourselves?

When I ask myself those questions, I feel that I’m on the right track, but I can be doing a whole lot better.  I am doing what I want to be doing.  I started my career in journalism as a sportswriter and sports photographer at local community newspapers.  Now I’m the owner and publisher of this newspaper.  It took a lot of hard work to launch this publication three years ago, and as an entrepreneur who is still in the startup phase, it’s taken a lot of hard work to publish 30 editions.  But have I fully adopted the Mamba Mentality?  Have I worked as hard as Bryant worked to become a great basketball player?  I’ve worked hard, but I can’t honestly say that I have worked as hard as Bryant.

With many startup businesses, there’s a lack of resources.  Those resources can be financial or hours in the day.  A small business owner with a small staff takes on a lot of tasks that should be given to somebody else.  But there really isn’t anybody else, so I end up doing a lot of things myself.  When people ask me about certain things that haven’t been done, I often say that the issue is a lack of resources.  That is a true answer to some degree.  But it’s not 100 percent true.  Some of the issues can be solved simply by me working harder; by maximizing the time that’s allotted to putting this newspaper together; by not putting tasks and ideas on the back burner and never getting to them; and by not procrastinating.

I’m following my dream and living my passion, but I can do better.  I don’t want to be in this startup phase forever.  It’s not enough to simply work hard like I’ve been doing.  I need to work harder.  I need to work as hard as being a newspaper publisher as Bryant worked to be a great basketball player.  We all need to work that hard at whatever our professions are.  And we all need to hold each other accountable.  So when you see me, please ask me if I’m living up to the Mamba Mentality.  If you read this story online, please leave a comment on social media asking me that.

The overwhelming majority of us don’t have the abilities to become a superstar basketball player like Bryant, but we all have the ability to use the Mamba Mentality to become the best version of ourselves.

Another life lesson that we can take from Bryant is mending broken relationships.  We all know of Bryant’s ugly feud with fellow Lakers super star Shaquille O’Neal.  Those two will forever be linked to each other, and it was unfortunate to watch that relationship fall apart as the two pretty much became enemies.  Thankfully, the two of them settled their differences and formed what appeared to the public to be a great relationship as they both retired from their professional careers.

It was touching to see O’Neal’s emotional reaction to Bryant’s unexpected passing.  Now, imagine how O’Neal would have felt if they were still enemies.  Think about all that time that they would have lost and never gotten back.  Life is short, and we should not be feuding with people who are family to us.  Thankfully the two of them repaired their relationship and were back to being family.  We’ve heard that Bryant had issues with his parents, and I can only hope that they repaired that relationship before his passing.

We should all look at our own personal relationships.  If there’s somebody that should be close to you, but you had a falling out with, reach out to that person.  It really doesn’t matter who is at fault or who should contact the other person.  If you’re reading this, than it’s on you to make that call.  We don’t know when anybody’s life is going to end.  If something unfortunate happens, don’t regret that you didn’t make an effort to repair the relationships.

It was exciting to see Bryant get better with age, even as his athletic abilities deteriorated.  His second act in life after his basketball career ended was off to an excellent start as he continued to utilize his Mamba Mentality in other endeavors.  And it was great to know that he made certain personal relationships right.  He continued to use Mamba Mentality to get better, and that’s something that we can all do.