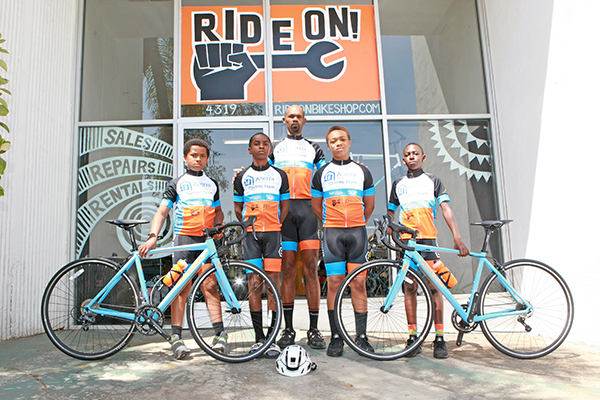 The team trains at Ride On! Bike Shop/Co-Op. Photos by Jason Lewis

The youth cycling team trains out of Ride On! Bike Shop/Co-Op in Leimert Park.

Damon Turner has worked in the cycling industry for a couple of decades.  He started out as a courier in downtown Los Angeles, which led him to ride competitively, and then it led him to the retail side of the industry.  He has carved out a nice career, but one thing that he typically does not see at races or bicycle events is people that look like him.

“I would go to cycling events throughout Southern California, and if there were 300 to 400 people at an event, maybe 100 competing, you might have seen three or four that look like me,” he said.  “I wanted to be involved in something that got kids that looked like me an opportunity.”

Turner started a cycling program for boys and girls, and he currently trains cyclists between the ages of nine and 17 years old.  He typically looks for a certain type of kid, and they aren’t hard to find in South Los Angeles.

“Generally, when you start a new year, you recruit kids with experience, but I’ve always made it a point of reaching out specifically to children of color who have never had an opportunity to do this,” he said.

Turner said that one of the reasons why the sport is not very popular in African-American areas is because of the cost associated with cycling.

“Even at the entry level of the sport, it can get very expensive,” he said.  “For an entry level kid, whether it be road cycling or track cycling, you’re looking at $3,000 per kid.  That’s per year.”

Turner has been able to keep the costs for parents pretty low by finding sponsors and accepting donations.

The children do portions of their training at Ride On! Bike Shop/Co-Op in Leimert Park on stationary bikes, and they also get out on the road, mostly in coastal areas.  They ride along a route on Pacific Coast Highway, going toward Malibu, and also routes in Palos Verdes.  Both of those areas have uphill and downhill sections.

The goal is to build up to 50-mile workout sessions, three to four times a week.

“They’re progressing faster than we thought they would at this level,” Turner said.  “The talent is there.  The talent is in our community.  It’s just a matter of getting these kids involved.”

The purpose of this team isn’t just to introduce the children to a new sport, but it’s to give them options as they grow up.

“This sport can take them all over the world,” Turner said.  “We absolutely want a kid to make it to the Tour de France, but there are so many more opportunities that are connected to cycling.  It’s connected to high school athletics, especially in areas that are more well off, and it’s connected to the collegiate level.  Every major college has a cycling program.  There’s also the industry as a whole, where you can connect kids to how bicycles are made and maintained; the manufacturing side of it.  You can expose them to the opportunities that are also available in the bike industry.  You’re creating a career beyond cycling itself.”

The team is sponsored by Alterra Home Loans, who will provide financial literacy workshops for the children.

“The racing team will be involved with seminars that Alterra Home Loans promote out of their offices in L.A.,” Turner said.  “We’re taking the kids to their offices, so that they can learn more about home ownership and financial literacy.  That’s a great part of this partnership.”

The race team has also participated in the Los Angeles Police Department’s cycling event at the Velo Sports Center at the Stub Hub Center in Carson.