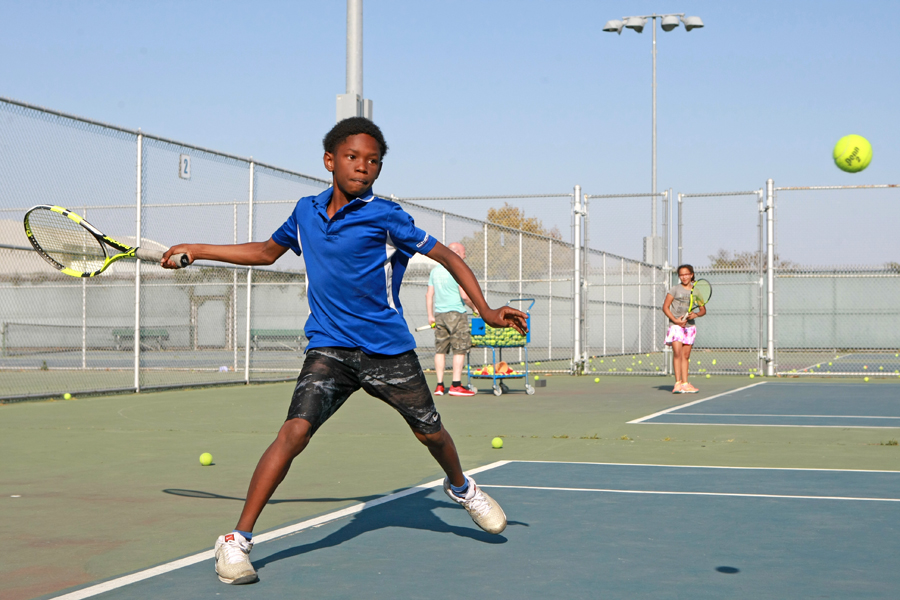 Titus Pittman is one of the Williams brothers young stars. Photos by Jason Lewis

Venus and Serena Williams are royalty in the tennis world, as they have dominated the sport for the the last two decades.  While they are known for being from Compton, they spent a lot of time training at Rancho Cienega Sports Complex, right in South Los Angeles.

The Williams sisters’ name remains prominent in South Los Angeles because they are still winning Grand Slam titles, and because the Williams brothers (no relation) have sent many young tennis players to college on scholarships through the Venus and Serena Williams Tennis Academy.

The Williams Brothers, Fred and Richard, also played a role in developing the Williams sisters during their youth careers.

The Williams brothers were born and raised in Watts, and they started playing tennis at Roy Rogers Park, now known as Ted Watkins Park.  They attended Jordan High School, where they figured out that tennis would be their route over football, basketball, or baseball, which a lot of Black athletes were playing.

Richard was on the basketball team at Jordan, but heading into his senior season, the coach let him know that most of the players from the team that had made the playoffs the year before were coming back, and he probably would not get a lot of playing time.  Richard saw the writing on the wall, and he knew that in a sport like tennis, everybody played, so he would have more opportunities.
As a Black athlete, Richard was quicker than most of his opponents, who were mostly White.  He focused on his tennis skills, and he became the first Black player to be named to the Los Angeles City Section All-City team.  His accomplishments earned him a tennis scholarship to Pepperdine University.  Both of the Williams brothers graduated from Cal State University Los Angeles, and played tennis in the military.  After their playing days were over, they did not leave the sport.  They decided to help younger players, and they knew that with the athletic abilities in the African American community, they could produce some outstanding tennis players while giving children an alternative to street life.
“Kids would come out, and they were athletically inclined, which means that they can pick up on tennis a lot quicker,” Richard said.  “One of the reasons why I was able to pick up on tennis a little faster was the fact that I did play football, I did play basketball.  If we could get more kids from these different sports, oh my God.  Even (Arthur) Ashe said it, that if you get these kids from the inner city to play some tennis, it’s going to be a different situation.”

The Williams brothers created a hotbed for tennis talent, and they had some of the best young tennis players in the area.

“We had so many juniors out here that were tough,” Fred said.  “It was like a haven because we had so many good players.  Even some of the White juniors started coming over here.  We had a lot of the top players in Southern California.”

Tennis is known as a rich White sport, but the Williams brothers created an environment that Black kids could excel in.

“We had those kids coming out,” Richard said.  “They were very enthusiastic about playing.  It was good.”

Fred recalls the first time Ashe, one of the greatest tennis players ever, came out to their training session, and he was shocked to see so many young Black tennis players who could play the game at a high level.  He was so happy with what he saw that he spent severals hours playing with the children, when he only planned to stop by for a short period of time.
The Williams brothers’ main goal is to get kids to college, and they have succeeded at that.

“We’ve helped people get college scholarships,” Fred said. “USC, Georgetown. Now most of them are going to the Black colleges.  We’ve had about nine go to Morehouse.  About eight went to Clark.”

The Williams brothers helped one family obtain scholarships for all six of their children.
“Otherwise they would not have been able to go to college, it was too much money,” Richard said.
The program that the Williams brothers run is also about education, because without the grades, the athletic and tennis abilities are wasted.
“We would question them on math, or on Black history,” Fred said.  “Before they would leave the court, they would have to tell us something.”

Tennis is a very expensive sport, so the Williams brothers have also worked out a manageable price for families who cannot afford typical tennis rates.  Their goal is to help out their community, and they have succeeded at an extremely high rate at doing that.

Currently they have a young player who is moving up the ranks.  Titus Pittman, a sixth grader who attends Audubon Middle school, has trained at the Venus and Serena Williams Tennis Academy since he was six years old.  Fred raves about his abilities.

“He learned how to serve a sliced serve all by himself,” he said.  “That's hard to do for older people.  We were teaching his older brothers, then we looked up and he was serving a sliced serve.  We asked where he learned that.  He said from watching us teaching his brothers.  This is stuff that you don't get at his age.”

Pittman is always in motion, and is constantly running around with a tennis racket in his hand.

“He just keeps on coming, and he never gets tired,” Fred said.  “I don't know how he does it. But he never sits down.  We run him through drills, and he just never gets tired.  That's the making of a good player.”

In many tournaments, Pittman plays against, and defeats, players that are in older divisions.  If he continues down this path, and he keeps his grades up, at minimum he has a great chance at receiving a college scholarship to play tennis.  He also has a chance at having a professional career.

For information about the Venus and Serena Williams Tennis Academy, call (323) 292-6844, email This email address is being protected from spambots. You need JavaScript enabled to view it., or visit www.venusserenatennisacademy.org.