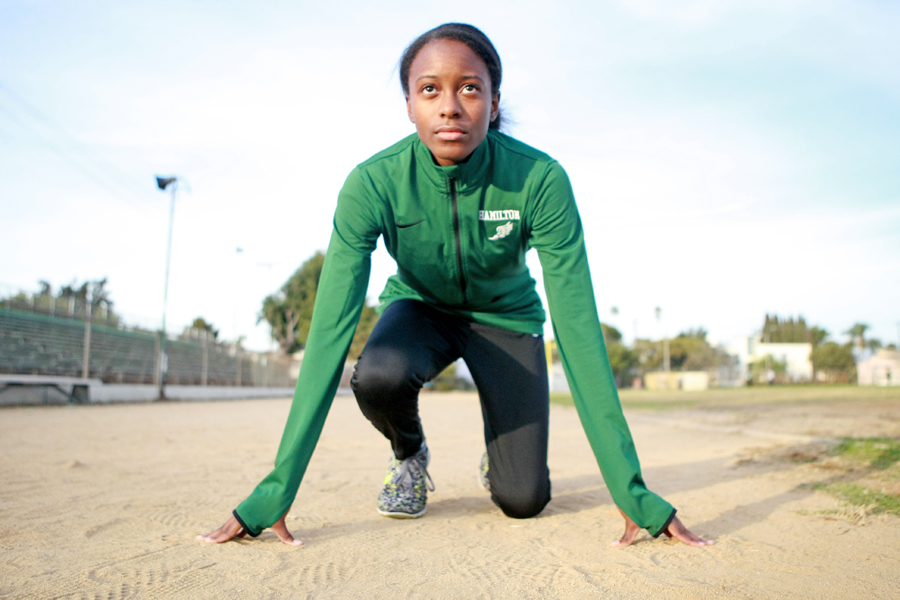 Hamilton High School’s Ayana Fields has City Section championships in the 200-meter dash and 400-meter dash in her sights. Photos by Jason Lewis

Athletic coaches, college scouts, and academic advisors are always preaching about time management.  For a student athlete who is looking to make it to college, it’s one skill that is vital to succeeding in sports and in the classroom.

For Hamilton High School track athlete Ayana Fields, the desire to excel both academically and athletically has made her learn how to manage her time properly, and she attributes sports as a driving factor to her being a good student.

“Being a student athlete is mostly about managing your time,” she said.  “I really didn’t learn about managing my time until I became an athlete.  In the ninth and tenth grade I did most of my homework at home.  But in the 11th grade, when I was taking AP classes, I really needed to focus on my work.  So now I do work at school during my breaks.  If I have time in class, I’d do work.  I’d do work on the days of track meets.  You don’t really have time to go home and do chores and all that stuff, and then put in study time for homework.  So I just manage to put some work in during class.

“If I didn’t do any sports, I might become a lazy person and wait until the last minute to do work.”

Fields, who is from Windsor Hills, started to compete in track when she was six years old.

Fields became serious about the sport when she was in the 8th grade.  At Hamilton, she has run on the varsity team since her freshman year.  That season she finished in 4th place at the City Section championship meet in the 400-meter dash.

The only competitor to defeat Fields last year in the 200-meter dash has graduated, and only one of the girls who was ahead of her in last year’s 400-meter dash is returning.  Couple with Fields’ drive to enhance her own abilities, this could be her championship year.

Fields is driven by competition, and she has spent her entire life with her biggest competitor.  Her twin brother Ryan is also on Hamilton’s track team, and a City Section title in the 300-meter hurdles is in his grasp.  Last year he came in second place in the event.  The sibling rivalry has driven Ayana to become a better athlete.

Being an athlete not only taught Fields about time management, it has also taught her how to be a leader.  While track can be considered an individual sport on some levels, she has to rely on her teammates for the 4x100-meter relay and 4x400-meter relay races.

Academically, Fields has a 3.3 GPA and her favorite subjects are in science.  She wants to work in the sports medicine field after she finishes college.  While she is excelling in the STEM subjects, she is also doing very well in English.

Fields will be applying to a number of colleges in California, and she attributes a lot of her success to her upbringing.  Her mother Teresa played basketball at USC on two teams that made it to the Sweet 16 in the NCAA Tournament.  Her father Reginald was a 400-meter sprinter at the University of Wisconsin-Eau Claire.

“My parents have always pushed me to finish what I start,” she said.  “You can’t stop in the middle of it.  They’re always there on the days of my meets, cheering me on.  My dad always waits at the finish line, and my mom records all of the races.”

Fields attends Holman United Methodist Church, where she volunteers as an usher.