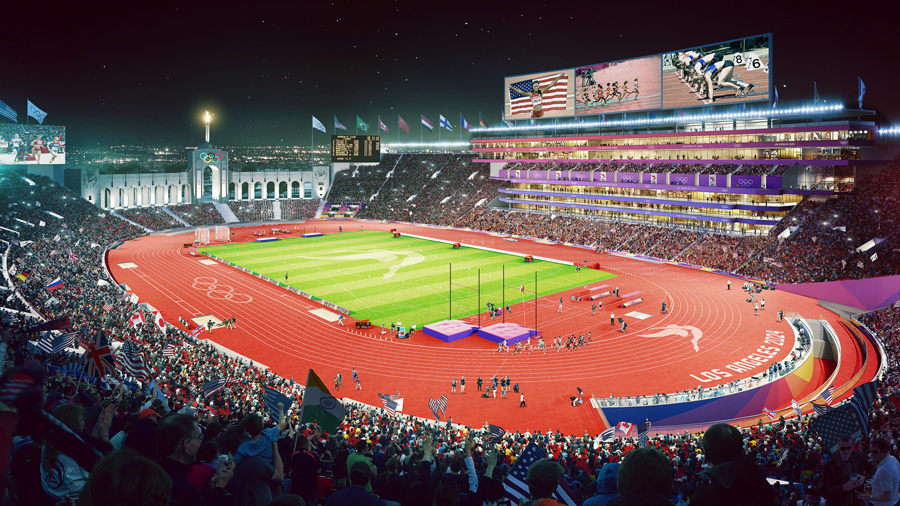 The Olympics will allow Los Angeles, including South L.A., to showcase the best that the city has to offer.

When the Olympics came to Los Angeles in 1984, downtown Los Angeles was like a ghost town after 5 p.m. and on weekends, there was no light rail system, and there were about one million fewer people living within the city limits.

Since then, Staples Center and L.A. Live has greatly contributed to the revitalization of downtown, and Los Angeles has a growing light rail system.  By the time the Olympics comes back to town in 2028, Metro’s light rail system will connect nearly every part of the city together, there will be a sports and entertainment complex in Inglewood that will rival Staples Center/L.A. Live, and some major development projects will be complete in the greater Crenshaw area.

Simply put, “Lord willing, we’re going to strut our stuff,” City Council President Herb Wesson said.  “We have an opportunity to show off our city to the rest of the world.”

The light rail traveling on Crenshaw Blvd., right through the black community of Los Angeles, will bring many people to this area.

“That means that when people come into town, they’re going to come straight through the heart of the community,” Wesson said.  “They will see upgrades at Leimert Park, at the Crenshaw Mall, and the properties adjacent to the Crenshaw Mall.  Hopefully there will be an Obama Blvd. that the train will go right past.  So we’re excited about having an opportunity for our side of town to shine.”

The 1984 Olympics brought major improvements to Jackie Robinson Stadium at Rancho Cienega Sports Complex, and the community has greatly benefited from that track and football field over the years.  The LA84 Foundation was also created, and it has invested more than $225 million in Southern California by awarding grants to youth sports organizations, initiating sports and coaching education programs, and operating one of the world's premier sports library.

It is expected that the 2028 Olympics will impact Los Angeles in a similar fashion.  This upcoming Olympics, like the 1984 Olympic Games, is expected to make a huge profit.

“The economic impact is going to be very positive,” said Gene Sykes, Chief Executive Officer of LA 2028.  “We had an economic impact study that was developed by an independent group and they described billions of dollars of benefits to this city.  We know the economic benefits will be very significant.”

The estimated cost of hosting the 2028 Olympics is $5.3 billion, though city officials expect the funding to come from The International Olympic Committee, sponsorships, private sources and ticket sales.  Los Angeles could close the games with a surplus of $400 million to $500 million, which would be more than the $225 million profit from the 1984 Olympics.

Financing the Olympics has many local residents worried, because nearly every country that hosts the games takes a major financial loss.  Most of the losses comes from building stadiums, arenas, other venues to host the various athletic events, the Olympic Village, and upgrades to transportation systems.  In the past, after the games ended, many of those venues have sat unused.  There are decaying stadiums, known as white elephants, in Brazil, Greece, Beijing, and other countries.

The 2004 Olympic Games in Athens went nearly $15 billion over its initial $1.6 billion budget, mostly because the Greek government had to build expensive venues.  After the Olympic Games, most of those venues, including the Olympic Village that was built for the games, have sat dormant.

Los Angeles is different from many major cities around the world because the major venues already exist.  That is one of the reasons why the 1984 Olympic Games generated major huge profits.  Also, factor in that Metro’s light rail system is being built independent of the Olympics, so those costs are not counted.

“We have all of the infrastructure that we need to host everything in the Olympic Games,” Sykes said.  “No other city really has that.  Every other city has to build a new stadium, or build a place for the Olympians to live.”

The dorms at UCLA will be used as the Olympic Village.  Opening and closing ceremonies, as well as the track and field events, will be held at the Los Angeles Memorial Coliseum.  A new soccer stadium is in the process of being built next door to the Coliseum.  The Rose Bowl, Staples Center, USC’s Galen Center, UCLA’s Pauley Pavilion, The Forum and The StubHub Center will be used.  There will also be events held at the Los Angeles Convention Center and Microsoft Theater in L.A. Live.

“Because we don’t have to build anything, our costs are significantly less,” Sykes said.  “That makes it much easier for us to host the games, and there is very little financial risks.”

Sykes said that the city will start to reap the benefits of the 2028 Olympics well before the games take place.  Over a ten year period prior to the games, $160 million will be invested in the city’s youth sports programs through the Los Angeles Department of Recreations and Parks.  The LA84 Foundation is expected to be a major partner in that plan.

The 1984 Olympic Games brought many jobs to the city leading up to and during the games.  The same will be true leading up to 2028.

“We’ve made commitments to work with labor organizations as well as the local communities to make sure that jobs are available to support the Olympic and Paralympic Games,” Sykes said.

Besides paid employment, more than 34,000 people volunteered to work at the 1984 Olympics.  So far, more than 12,000 people have already signed up to volunteer for the 2028 Olympic Games.  Many of those volunteers are already performing community service to ensure that they receive priority placement in 2028.