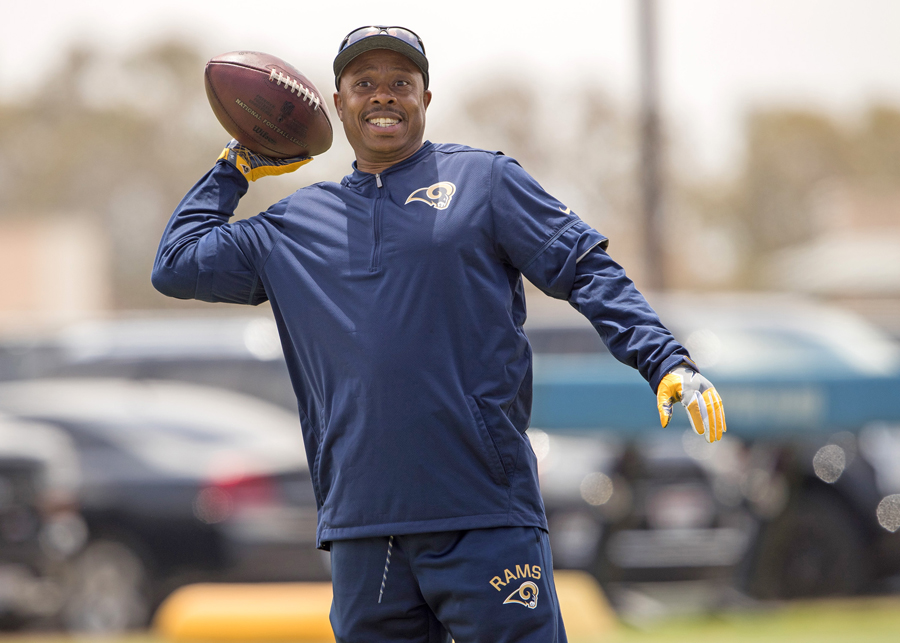 Eric Yarber started out playing football at Crenshaw High School and made it all the way to the NFL. He’s now the Los Angeles Rams’ wide receiver coach. Photos by Jeff Lewis/Los Angeles Rams

Eric Yarber dreams really big.  Combine that with a lot of hard work and determination, it led him from playing football at Crenshaw High School to continuing his playing career at the University of Idaho, and in the NFL.  His playing career led him into coaching.  After working as UCLA’s wide receiver coach from 2012-2016, he joined the Los Angeles Rams in 2017.

Yarber was a big fan of Rams legends from the 1970s, including James “Shack” Harris, who was the first black quarterback to start and win a NFL playoff game, and a Pro Bowler in 1974; six-time Pro Bowl linebacker Isiah Robertson; and Pro Bowl defensive end Fred Dryer.

“When I went up to the University of Idaho, the first thing I said was, ‘just tell me where the crips are, and where are the bloods are, and I’ll be fine,’” he said.  “They said, ‘son, you don’t have to worry about that up here,’ and that was the first time that I knew that everybody didn’t live like me in South Central.”

Yarber was still a small player, playing college football at 145 pounds, but he was a playmaker, as he was an All-American and the Big Sky Conference’s Most Valuable Player during his senior season.  He was drafted by the Washington Redskins in 1986, where he played for three seasons.  He was a member of the Redskins’ 1987 Super Bowl championship team.