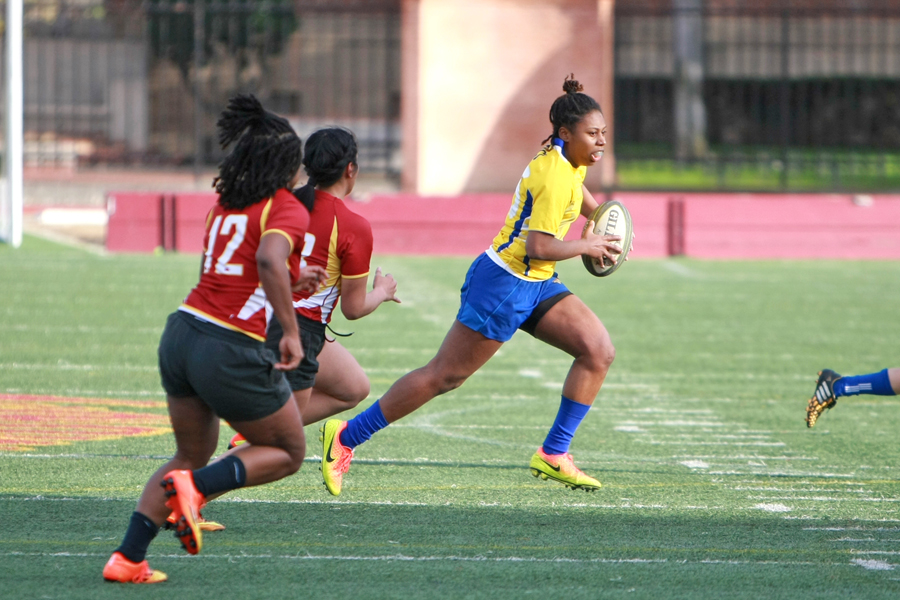 Elona Williams is one of the leaders on an undefeated UCI rugby team. Photo by Jason Lewis

Two things have been a constant over the past six years in Elona Williams’ life.  The junior at the University of California, Irvine (UCI) and former co-valedictorian at View Park Preparatory High School works hard to earn good grades, and she hits people.

Williams has been hitting people since the 8th grade, and it has actually helped her become a well rounded person.  The hitting that she is doing is in rugby, which is one of the more brutal sports in the world.  It’s pretty much tackle football, without the pads.

Williams grew up playing sports with the boys in her neighborhood, and football was one of her favorites.  She never played the sport on an organized level, but she did play tackle football with her friends, and she thought about playing the sport in high school.

While in the 8th grade, Williams joined the Southern California Griffins All-Star rugby team, and it did not take long for her to figure out that it was her passion.  The physical nature of the sport did not bother her, and she uses her speed to track down ball carriers and make tackles.  In her current position at UCI, she plays in the defensive backfield, where the ball carriers typically are not looking for oncoming tacklers.

“They don’t see me coming,” she said.  “They think they have a score, and then I come out of nowhere and hit them.  It’s pretty fun.”

Offensively, Williams uses a combination of speed and toughness to outrun opponents, and sometimes run right through them.

Williams can have a future in rugby beyond college, as she has been invited to elite camps throughout her college career, including a camp at the Olympic Training Center.  And she has taken the initiative to showcase her abilities by hosting a camp at UCI that she planned with her coaches.

Taking initiative is one of Williams’ leadership skills.  While in high school, she attended the Tavis Smiley Institute, which is a leadership camp.  Those leadership skills have allowed her to serve as the team’s vice president the last two seasons.

The sport has exposed her to various cultures from around the world, as she has traveled to Europe, China, and New Zealand while playing at View Park Prep.  That experience helped her when she chose to attend UCI.  View Park Prep is a predominantly African-American school, but the black population is relatively small at UCI.

“Traveling with rugby, I’m used to diverse cultures, so that does not bother me as much as it would some other students.  I make friends with different types of people.”

Williams is majoring in sociology with a minor in African American studies.

“I love sociology,” she said.  “I really like courses where you can have conversation and be free to say what you think.  It’s not so stringent.  It’s not so much by the book.  You get to express yourself.”

Williams learned how to have a strong work ethic while attending View Park Prep, where time management was extremely important.  That has helped her at UCI.

“Because it’s the quarter system (10-week classes instead of 20 weeks in the semester system) at UCI, everything moves a lot faster,” she said.  “By the time you grasp a concept, you’re already on to three other ones.  So it is challenging to balance that with sports, but you get used to it.”

After Williams earns her bachelor’s degree, she will pursue a career in entertainment marketing.  She is going to play rugby as long as she possibly can, and she has put herself in a great position to succeed outside of sports after her playing days are over.