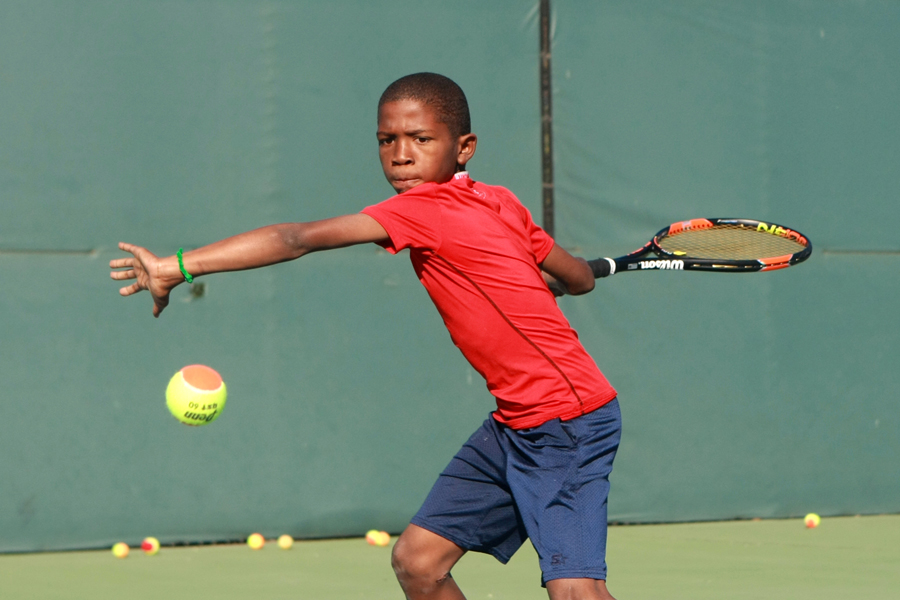 Alex Haley Jones Jr. is one of many young players who is excelling both on the tennis court and in the classroom at school. Photo by Jason Lewis

This program has helped a number of young tennis players make it to college.

Tennis is thriving in South Los Angeles, as the Pete Brown Junior Tennis Program is developing some amazing young players and helping them make it to college.

The program was launched in 2009 at Harvard Park by George ‘Marty’ Woods, who was looking for a way to honor his mentor and service his community at the same time.  This program follows in the footsteps of the legendary tennis player.

Ulysses ‘Pete’ Brown was a teacher at Fremont High School, starting in 1960, and he coached the tennis team to the Southern League title in 1971.  He later moved on to become the tennis coach at Los Angeles Trade Technical College, where he led the team to the school’s first conference title for any sport.

After retiring, Brown continued to teach the game of tennis to children, particularly in the inner city.

Woods has continued Brown’s work by introducing this current generation of children to the sport, and helping them become college athletes.  There are children as young as four years old in the program, and no experience is needed to begin.

“Ninety-nine percent of them have never played, but that’s what we’re here for,” said Delores Simmons, treasurer of the program.  “We develop them.  We give them the skills.  We give them the understanding of what it takes be consistent, and to be focused on learning a sport.”

The program is free to the public, and the tennis balls and rackets are given to the children.  Parents typically purchase the tennis shoes, but at times those are donated to the program.

The coaches at the program train the children to become tournament ready, as they will compete against children from other parks.  The tournaments are typically held at Harvard Park, in Marina Del Rey, and in Hermosa Beach.

The program has about 30 children per year.  In the program’s first year, five of the players went on to college, and they are now graduating from various universities.

“We encourage them to higher education,” Simmons said.  “We have contacts with college coaches, and when the kids get in college we keep up with them.  Because we want kids to know that going to college can be a way of ensuring their future.  Tennis is the vehicle to pay for their education.”

“We emphasize that we want the kids who play tennis to be good students,” Simmons said.  “That’s essential.  We want them to not only excel in sports, but they need to have a solid educational interest.”

One of the program’s young players, Alex Haley Jones Jr., is rapidly developing his tennis skills, and he has a goal to attend Loyola High School, which is one of the top academic schools in the Los Angeles area.

“Once it’s time for him to go to high school, I told him that if he keeps his grades up, then he can go to Loyola,” said Alex Jones Sr.

Jones Sr. credits this program with a lot of his son’s success.

“This program has really helped out my son a lot,” he said.  “He played tennis (before joining the program).  Coming here to the program at Harvard Park, they developed him more fundamentally and gave him more stability.  This program is awesome when it comes to beginners.”

For more information about this program, contact 714-202-4778, visit www.pbjtp.org, or email This email address is being protected from spambots. You need JavaScript enabled to view it.. Find them on Facebook and Twitter.