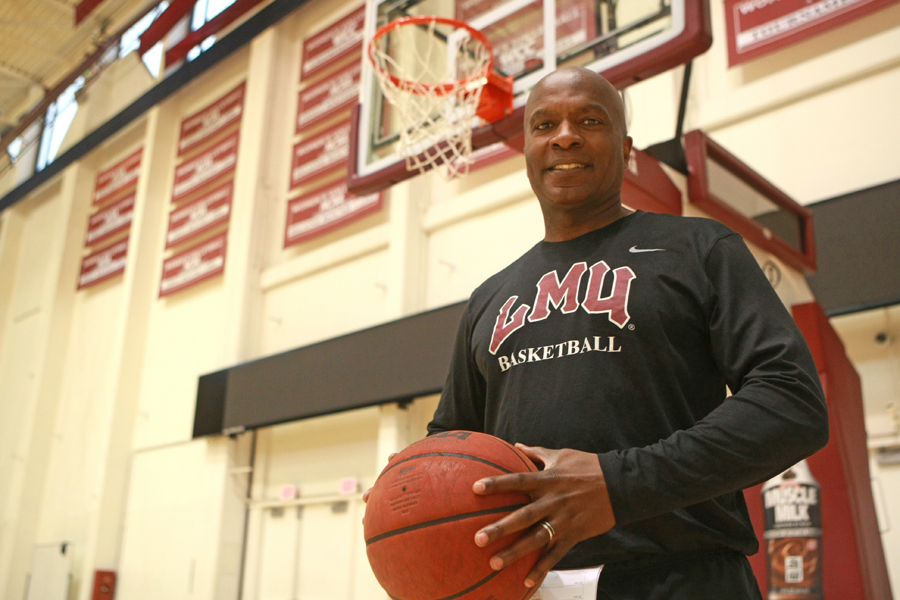 Patrick Sandle is an assistant coach at Loyola Marymount University

After playing on two Crenshaw championship teams, Sandle has dedicated his life’s work to basketball.

Patrick Sandle learned at a young age that if he was going to succeed at basketball, he could not be afraid of competition and hard work.  A lot of the youth basketball talent in the Los Angeles area was concentrated in the areas where he grew up.

As a young child, Sandle lived near 24th Street and Budlong Avenue.  His family later moved to a neighborhood around 55th Street and Vermont Avenue, before ending up near 48th Street and Western Avenue.  That put him right in the middle of Crenshaw High School and Manual Arts High School, which were two of the top basketball schools in the 1970s and 1980s.

During that time period, elementary school and junior high school teams were more popular than the current day AAU youth teams.  Sandle became a standout player while playing for 52nd Street Elementary School and John Muir Junior High School.  Between the coaches at his school and the other kids in his neighborhood, he had all of the tutelage that he needed.

“The coaches there were awesome, but there were some guys in the neighborhood that really took me under their wing,” Sandle said.  “There were some older guys who would come after our elementary school practice.  They’d play on the little eight-foot rim courts.  They’d play pickup games, and they’d pick me and make me play with the older guys.  I seen how much those guys loved the game, and understood the game.  They taught me how to be a better basketball player and a better person as I grew up.  I fell in love with the game of basketball from there on.”

When it was time to choose a high school, Sandle had a pretty big decision to make.

“I was really debating hard about going to Manual Arts,” he said.  “They had some really good teams, and I really admired some of their players.”

As enticing as it was to play at Manual Arts, Crenshaw was racking up city titles under legendary head coach Willie West.

“Crenshaw’s guys did a tremendous job accumulating good players from the area, and coaching them and developing them into very good players,” Sandle said.

At this point, Sandle really figured out that simply being good was not going to be enough, because there were about 80 boys trying out for the varsity team.  The school was so loaded with talent that there were a number of seniors playing on the B team, which was not typical for most high schools.

“I thought that I was a pretty good basketball player until I got there and seen so many other guys that were pretty good,” he said.  “You had to dig down deep and push yourself or give up and go play another sport.”

Sandle also figured out what real competition was at this point.

“It was competitive,” he said.  “One thing that it taught me was that if you really love the game of basketball, and you wanted to play it, you had to take a part of your life away and dedicate it to basketball.  You just couldn’t hang out with your friends.  Something had to give.  Some time had to be gone from somewhere so that you could go and work on your game.”

While there were many players in the program who could have been starters at other schools, some of them were not going to reach their goal.  Many players today transfer to other programs, but that was not an option that Sandle was going to take back then.  That taught him a valuable lesson.

That drive led him to becoming a starting guard on the varsity team, and he helped the team win two City Section championships in 1978 and 1979.  Even though he had accomplished his goal of earning a starting spot, he knew that he had to work hard to keep that spot.

“Back then Crenshaw was really known for winning championships,” Sandle said.  “We put a lot of hard work in.  Coach West did a great job of getting guys to play together.  And you had to play hard and play smart, because if you didn’t, there was somebody behind you that was going to take your spot.”

Playing under coach West took Sandle’s game to new heights, but he had another mentor that allowed him to make it to college basketball.

“My mother was really tough about the academic stuff,” he said.  “I’ll never forget the things that she’d make me do that I wasn’t really fond of.  I’d be outside playing with my boys and she’d make me come in and read articles.  Like any other kid I wanted to be outside playing football and basketball and baseball.  Just hanging out instead of sitting there reading.  But the articles were always motivating, and inspiring.  It made me think about who I wanted to be, and how I wanted to live my life.”

After high school, Sandle became a standout player at Cuesta College in San Luis Obispo, and then at San Francisco State University.  While in college he was a communications major, with the goal of being a reporter at ESPN.  But after coaching at some basketball camps and clinics, his love for the game led him to a career in coaching.

After graduating from San Francisco State, Sandle took his first coaching job at Cuesta College.  For the next 10 years he bounced around various programs as an assistant.  He coached at Skyline College, Fresno State, St. Mary’s, Santa Barbara City College, and a few other spots.  Most of these were part-time positions, so he had to work other part-time jobs to get by.

Around the age of 30, Sandle finally landed his first full-time coaching job when coach Ben Howland hired him at Northern Arizona University.

“It felt good not to have to run to another job, or go and do other things,” he said.  “I felt like I was going in the right direction.”

Sandle coached under Howland at the University of Pittsburgh, and at UCLA.  He has been on the coaching staff at Loyola Marymount University since 2014.  He has been a great fit for the program, and it has allowed him to be close to his mother, who is now 98-years old.

“This is a beautiful thing,” he said.  “I get to be around my mentor.  My kids get to know her.  It’s important to have that family part to you, and I’m trying to give that to my kids.”

Sandle is married with four boys, who are all into sports.

“One more and I could of had a starting five,” he said.

Sandle has made a successful career in coaching, and he leans on the life lessons to continue to grow.

“I think the biggest thing that I learned from my mother and from coach West is that working hard and having that opportunity to do what you want to do, it’s all up to you and your attitude,” he said.  “Just having that right attitude on how you want to proceed in life.”