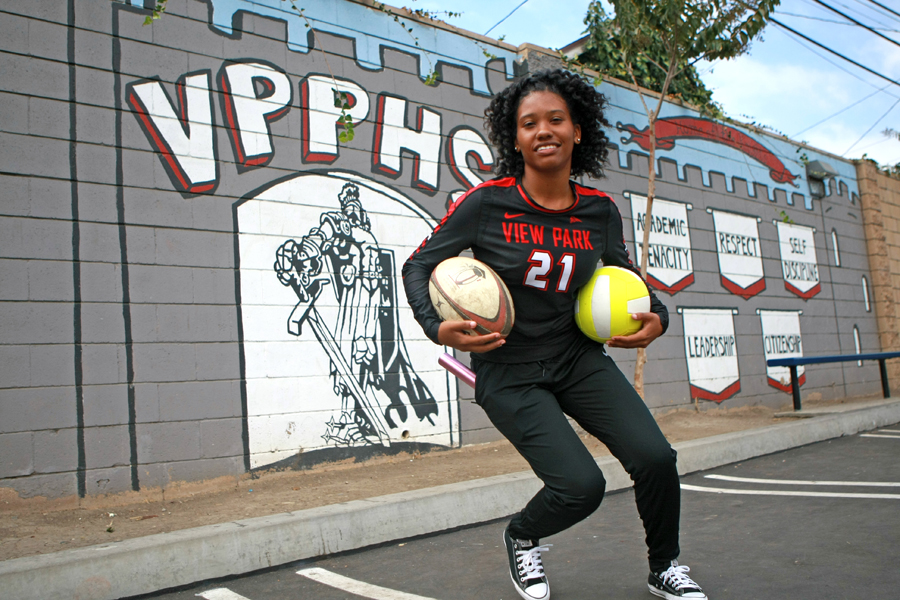 View Park Prep’s Danecia Fernandes excels at pretty much everything that she does. Photo by Jason Lewis

View Park Preparatory Accelerated Charter High School senior Denecia Fernandes plays rugby, runs track, is the captain of the volleyball team, the senior class’ vice president, and she just happens to have an issue with getting anything less than an A in a class.

“I’ve been getting A’s since kindergarten,” she said with a smile.  “So, like, it’s just a habit for me now.  So anything less than an A is not okay.”

Fernandes has a 4.07 grade point average, but the thing that surprises people the most is that she plays rugby, one of the most brutal sports in athletics.

Rugby is typicaly played by male athletes, but View Park Prep has a girls team, as well as a team for the boys.  Fernandes became interested in the sport after watching her brother, who is two years older, play the sport for View Park Prep.  He now plays rugby at Arizona State University.

Rugby is an incredibly tough sport because it is similar to playing tackle football in certain aspects, but without the pads.  When Fernandes first took up the sport, she had to toughen up really quickly.

“When I started, it wasn’t like I was spectacular or anything,” she said.  “My mom would say that I ran all prissy and stuff, like I didn’t want to get tackled.”

After learning the fundamentals of the game, Fernandes was able to handle the physical nature of the sport, and the contact was not much of an issue.

“It doesn’t necessarily hurt, because we have to use proper technique,” she said.  “If you do it right, you don’t get hurt.  It’s just a matter of playing by the rules.”

Rugby has helped Fernandes grow physically and mentally, and it has helped her become a more mature person.  One perk about the sport is that it has allowed her to travel internationally, as View Park Prep’s team has traveled to Japan and Brazil.

“Japan was one of the best trips because their culture is so much different than ours,” she said.  “I think that getting experience from the different cultures helps you be more well rounded as a person.  It helps you open your eyes to different experiences.

“We meet people, we go to schools, and we talk to people our age.  On one of the trips (Brazil), we were taking public transportation and a lady was telling us how they were tearing down the poor communities for the Olympics, and how the government wasn’t helping.  They weren’t giving them any aid.  Basically they weren’t assisting them.  It’s crazy how in third-world countries, their governments won’t help them, but that’s not what the rest of the world sees.  They see the Olympics, but they don’t see that people are getting kicked out of their homes.”

“I feel that I’m a natural born leader,” she said.  “When we need to come together as a team, I kind of unite us as one.”

As a long jumper, Fernandes made the Los Angeles City championship meet last year.  While athletics has positively impacted her life, it is academics that is going to take her to the next level.  And she attacks her school work similarly to the way she does sports, with commitment and tenacity.

After practicing her sports for two hours after school everyday, Fernandes gets home around 6 p.m. and does homework for about two hours.  She follows that up with about a hour of SAT and ACT prep work.  It’s tough to say which subject she is the best at, since she gets A’s in all of them, but she does have a favorite.

“I like math,” she said.  “I guess it comes easy to me.  I understand things a lot quicker than others.  Right now I’m in AP calculus, and that’s a new challenge.”

“It’s helping me with student-body involvement,” she said.  “It lets me voice the opinion of my peers.”

Academics and sports are extremely important to Fernandes, so she wants to combine the two when she gets to college by majoring in sports medicine or kinesiology.  Pepperdine University is one of the top colleges on her list because of their kinesiology program.  If she chooses a UC school, it would have to be one that has a strong sports program so that she can intern with the athletic department.  She is also looking at some of the Cal State schools that have sports medicine programs.

“I like sports, and I like to help people, so that just combines my two passions,” she said.

While Fernandes’ activities at View Park Prep keep her busy, she still finds time to perform community service through JANRAH, which is a program that supports black and Latina girls from urban communities as they pursue their educational, career, and life goals.

Religion is also a big part of Fernandes’ life, as she is a Jr. Usher at Baldwin Hills Baptist Church.  Her parents are from Guyana, South America, and they have greatly impacted her life.

“They’ve supported me in everything I do,” she said.  “They’ve never said ‘you can’t get less than an A,’ but of course they support me in being involved in sports and all of my extracurricular activities.”