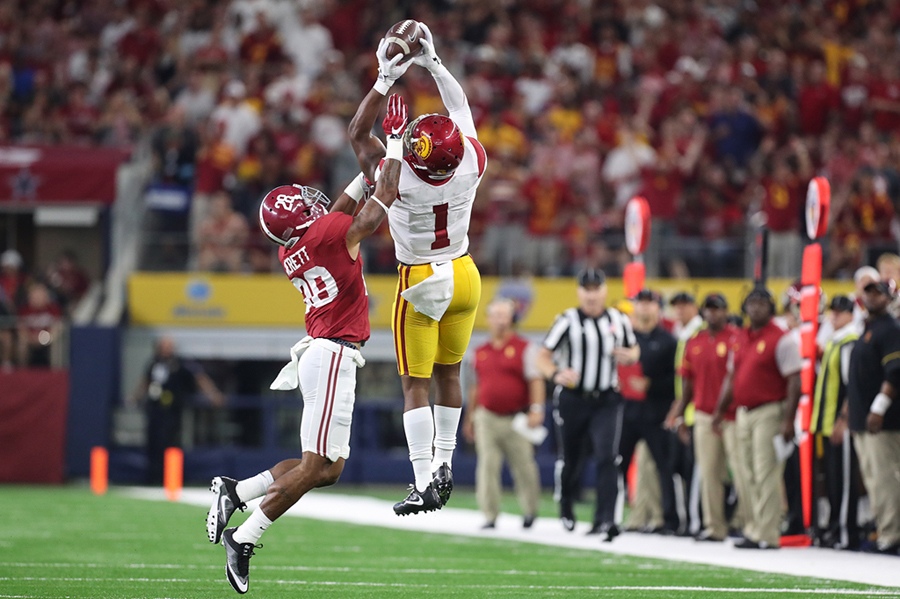 USC vs. Alabama at Cowboys Stadium. Photo by Jordan Kelly

UCLA and USC opened their football seasons in Texas, as UCLA traveled to Texas A&M in College Station and USC played Alabama at Cowboys Stadium, just outside of Dallas.

Local photographers Jevon Moore, editor of Full Image 360 News, and Jordon Kelly made the road trip out there to shoot the games.  For the two, this was a business trip, but at the same time it was a football fan’s dream because they were able to attend big-time college football games at some prominent stadiums.

“It was pretty awesome to see Kyle Field (Texas A&M) and learn about the Aggies’ 12th Man,” Moore said.  “This field had 104,000 folks packed in the stadium, defiantly largest crowd I will see this year during college season until bowl season.”

Moore played football at University High School and then UCLA.  His passion for sports continued after his playing days were over, and photography has been his way of interacting with sports at a higher level than a typical fan can.

“What draws me to photography is my love of sports,” he said. “I grew up with a sports background, so I enjoy going out and shooting.  Before I started, I’d be at a high school football game every Friday night.  And in the past I had Clippers season tickets.  I’ve always enjoyed the sports atmosphere, but now I get to enjoy it from the sidelines.”

Moore picked up photography as a hobby, because he wanted to get some good shots of his young children playing sports.  He thought that by the time they got to high school, he would be a pro at it.  Well, things happened much quicker than that.  He invested in some high-end equipment in 2011, which allowed him to capture the same images that the professionals were getting.

Moore dabbled in the hobby while in high school, but playing sports took him away from it.  When he picked it back up again, it did not take long before he was in the action.

“I started to meet a few different people when I was out there shooting, and one thing led to another,” he said. “Next thing you know I’m shooting at UCLA, USC.  I got a chance to go to Qualcomm Stadium (San Diego) to shoot my first NFL game.  And things continued to blossom for me.”

The highlight of Moore’s career (so far) was shooting both the Rose Bowl and BCS National Championship games two years ago.  One play in that game really sticks out for him.

“Florida State’s Kermit Whitfield, in the National Championship Game, seeing him catch the ball in the end zone (off of a kickoff return),” Moore said.  “He starts coming down the sideline where I was standing, next thing you know 100 yards later he’s in the other end zone.  That’s one of those plays that I was able to shoot from start to finish.”

As much as Moore likes shooting big time sporting events, he still drives around from high school to high school to shoot players who are performing simply for the love of the game.  As much as it is a hobby and a profession, he feels like he is doing a service for his community by telling a story with his camera.

It’s pretty easy to identify Moore on the sidelines of games, because he always wears an orange shirt, which has become his trademark.

“The orange shirt is the brand of fi360 News and Full Image 360,” he said.  “My high school colors were orange and blue, so orange stuck.  The high school players would remember, ‘oh there is "Mr. Orange,” we can go to fullimage360.com to see our game photos.’ To grow our brand we had to be consistent with our identity.”

Kelly is also a former athlete who gravitated to photography.  He played football at Carson High School, and later played for Los Angeles South West College.  He has shot the NFL, NCAA, WNBA, and auto racing.  He has also shot red carpets at entertainment events.