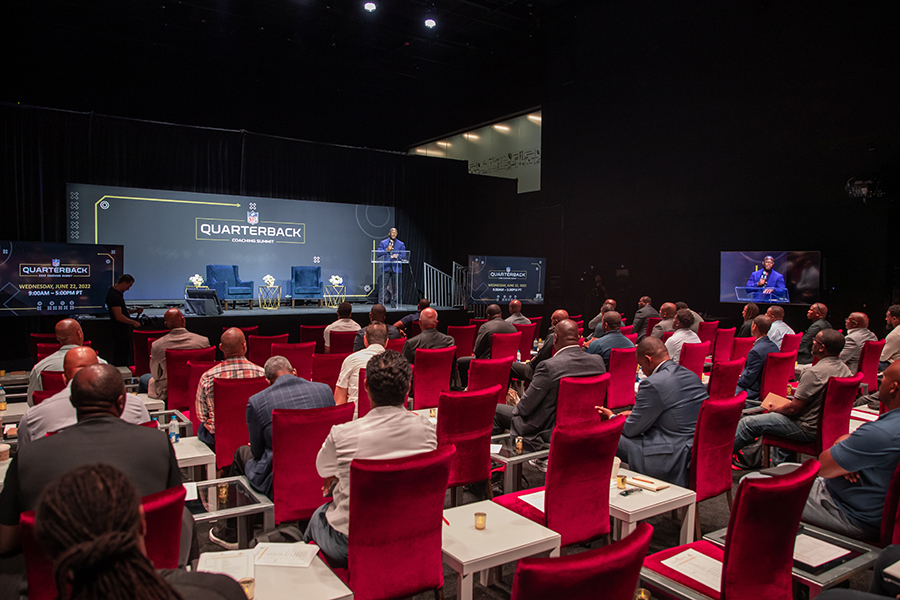 This summit dispels the narrative that there aren’t many Black coaches in the pipeline. “I think it’s a cop-out.”

By Jason Lewis
This email address is being protected from spambots. You need JavaScript enabled to view it.

Heading into the 2022 NFL season, there are only three Black head coaches, which are the Pittsburgh Steelers’ Mike Tomlin, the Houston Texans’ Lovie Smith, and the Tampa Bay Buccaneers’ Todd Bowles.  The issue of Black coaches historically being the slowest to be hired as head coaches, and the quickest to be fired when obtaining a head coaching job, has not been solved.

To address this issue, the NFL and the Black College Football Hall of Fame partnered to host the second annual Ozzie Newsome General Manager Forum and the fifth annual Quarterback Coaching Summit from June 21-23.  Forty-eight Black coaches and 17 Black executives from the NFL and college football participated in the three day event at the NFL’s office in Inglewood, adjacent to SoFi Stadium.

For many NFL head coaches, the coaching carousel that Brown has been on is what the coaching pipeline looks like, and he does not believe the narrative that Black coaches are not in the pipeline.

“I think it’s a cop-out,” Brown said.  “It’s an excuse.  I think that people are just not comfortable getting outside of their comfort zone by going through different avenues and picking people who don’t look like them.  I think that’s more of a bigger issue than a pipeline.  I’ve been around a lot of great coaches of all races.  From a Black coach standpoint, there are plenty of guys that I’ve been around, learned from and continued to grow with.  One thing we can do is fill the pipeline up so that they can stop making excuses that there are no coaches in the pipeline.  That’s a cop-out in my opinion.”

One of the goals of Black College Football Hall of Fame co-founder James “Shack” Harris, who played quarterback for the Rams in the mid 1970s, was to show that there are many Black coaches who are positioning themselves for head coaching jobs, and that they are as capable as anybody to do those jobs. 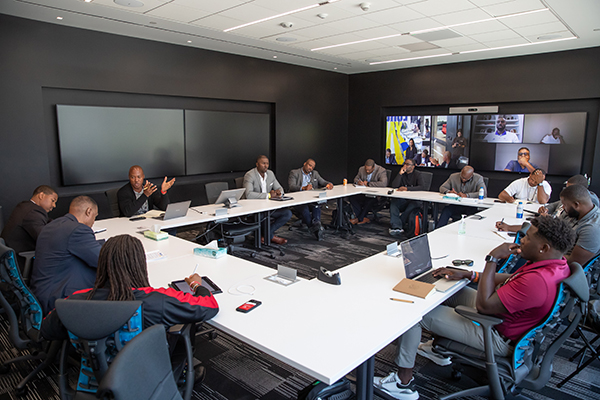 During the summit there were workshops and coaching clinics that were mostly led by the Black coaches.  Doug Williams, who was the first Black quarterback to win the Super Bowl and is also a co-founder of the Black Colleges Football Hall of Fame, dispels any thought that Black coaches are not as smart as White coaches.

“Coming to the summit, you can see that these guys know exactly what they’re talking about,” Williams said.  “Nobody is smarter than these guys.  It’s about an opportunity.”

“Most of the guys who are getting hired in this league were coaching and working with the quarterback,” Harris said.  “So we felt that we needed to identify coaches, college and pro, who had been in the quarterback room, had been around the quarterback, and once we started doing that we found some guys who we didn’t know.  As they present, we’ve been impressed by them.”

During the workshops, the Black coaches gave presentations where they broke down the Xs and Os of the game, and they spoke about the best practices that they used to become successful coaches.  It allowed the presenters to showcase their knowledge, and it was educational for coaches who do not work directly with the quarterback.

“The education is that you have an opportunity to see a lot of these men present to show that they are very capable and really experts at their craft,” said Jim Caldwell, former head coach of the Indianapolis Colts and the Detroit Lions.  “But they’re also sharing that information with other individuals who are aspiring to be head coaches, quarterback coaches, or coordinators.”

Exposure is another key component to this summit, as each workshop was recorded and will be made available to team executives around the NFL.

“Often times a number of individuals in the NFL would always allude to that they didn’t really know very many of the minority coaches,” Caldwell said.  “They didn’t know much about them.  They didn’t know if there was a solid group of them who were capable of doing the things that were required.  So this has been something to offset that thinking.  There are a lot of great young minds in this game that are affecting the game through the innovation of the coaching and also in developing relationships with the players.”

“We’re in the NFL office,” Williams said.  “These guys are getting the opportunity to work in the National Football League.  Don’t think for one minute that the owners and everybody doesn’t know that we’re doing this.  It’s being taped.  We had a couple guys at the summit last year who got jobs.  We just feel like with the way that the NFL is going, and knowing that inclusion and diversity is a big issue with them, I think it’s going to open the doors for a lot of these guys and a lot of other guys.  The most important thing is to have something like this.  To let the coaches and general managers know that they can make a call to see the tape.  And they already know some of these guys and they know that they can get the job done.”

For Brown, participating in this summit is putting the NFL on notice that he has positioned himself to be a coordinator and then a head coach.

“From the standpoint of getting exposure for myself as a presenter, it’s going to be huge,” Brown said.  “I’m putting myself in front of people who have influence from a decision making standpoint.  The other big part is the networking opportunities.  I get to connect with some of the best and brightest minds in this game, and I get to learn from those guys.”

For more information about the Black College Football Hall of Fame, visit www.blackcollegefootballhof.org.