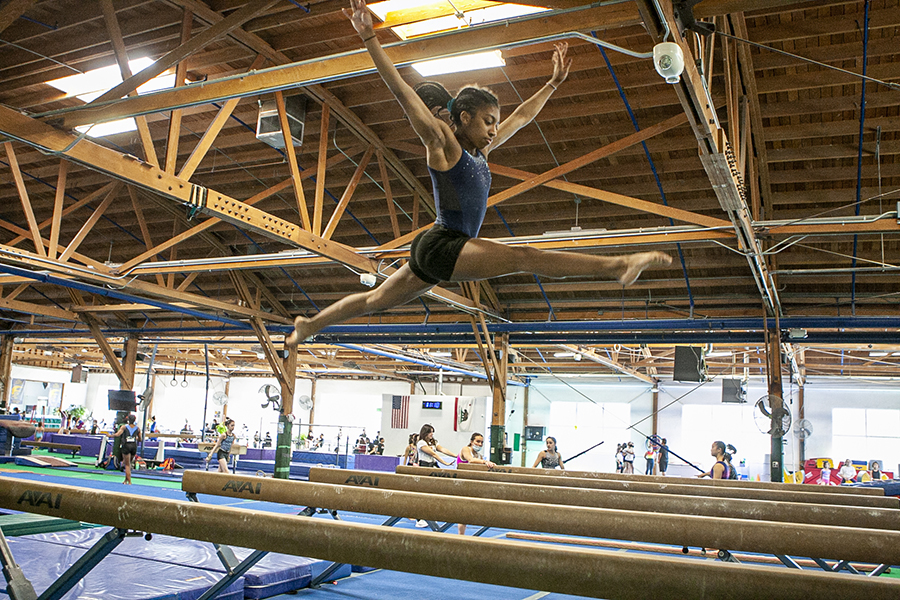 Kristin Rolfe has been racking up gymnastic medals throughout her childhood. Photos by Jason Lewis

Fisk University will become the first HBCU to have a gymnastics program, giving Black gymnasts an opportunity to attend a Black college.

Fifteen-year-old Kristin Rolfe fell in love with gymnastics when she saw Team U.S.A. gymnast Gabby Douglas capture the world’s hearts at the 2012 London Olympic Games.  Kristin saw somebody who looked like her become the Olympic darling.

Kristin had friends in elementary school who took gymnastics classes, and they taught her a few maneuvers on the playground.

“She learned stuff on the monkey bars and then she’d come home and she’d be flipping,” said her father James.  “She would be climbing the walls and she learned how to do backflips.”

James and his wife Kimberly enrolled Kristin in a West Los Angeles College Extension gymnastics class when she was seven years old, which is considered a late start for many girls.  The extension course was more reasonably priced than most youth gymnastic schools.

“By the end of the fourth class the coach said, ‘Your daughter is really advanced, and we want to move her up,’” James said.

Kristin was fearless and quickly fell in love with the sport.

“When I first started gymnastics, I just loved moving through the air,” she said.  “As I got older, I love trying new skills that I have never done.  I’ll try anything.”

Kristin’s strengths are in the vaults and bars, and she said that she’s getting better on the beam. Throughout her childhood, she has racked up several gymnastics medals, and she’s looking to take her talents to the next level. 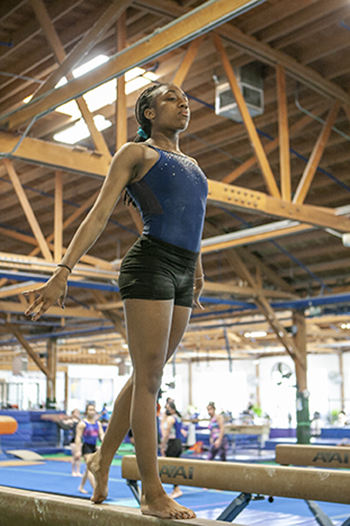 “I would like to do gymnastics in college,” she said.  “Whenever I go to a UCLA meet, they look like they’re having so much fun and I’d like to be a part of a team like that.”

At the college level many of the top programs in the nation feature Black gymnasts.

“We’re seeing a lot more African-American gymnasts, and that’s a good thing,” James said.  “The top gymnasts are at the major colleges like Michigan, Florida, and Alabama.  Wherever African American women are in gymnastics, they’re killing it right now.”

Up until this year, Kristin’s ideal colleges have been UCLA and The University of Utah, which both have highly ranked gymnastics programs.  Now Fisk University, a Historically Black College and University (HBCU), is on her list.  Fisk recently announced that they will become the first HBCU to have a gymnastics program, with the goal that other HBCUs will develop programs in the future.

“It’s added to my list of colleges that I’d like to go to,” Kristin said.  “My dad talks about it a lot.”

“Now we’re starting to look at HBCUs because on a historic front, that would be great for her,” James said.

Fisk University’s gymnastics head coach is Corrinne Tarver, who became the first Black gymnast to win an NCAA all-around championship when she accomplished that feat in 1989 while attending the University of Georgia.  Tarver brings a wealth of experience in college athletics and over 30 years of gymnastics coaching.  She has seen many Black women like her excel at the highest levels of the sport.

“Women of color have done some amazing things for gymnastics,” Tarver said.  “Black women included in that.  If you look at the last three Olympics, women of color have won.  If you look at national championships for college, every single athlete that won an event was a woman of color.  Three of the four events, as well as the all around, were won by Black gymnasts.  It’s obvious that we’ve made a statement on a national and international team scene.  Black women are comprising up a large portion of the top levels of athletics.  There was recently an international meet that USA gymnastics sent the athletes to, and most of them were women of color and Black.  So it’s exciting to see where we have come and I believe we’re here to stay.  The future is looking brighter.”

African American athletes tend to be more explosive, which is one reason why they dominate men’s and women’s sprinting events in track and field.  The positions in football that require the most speed are filled with mostly Black athletes.  And leaping ability is extremely important in basketball, where 80 percent of the NBA and 70 percent of the WNBA are Black.  So it’s no surprise that Black women are doing very well in gymnastics.

“It is a physical thing,” Tarver said.  “It has to do with fast-twitch muscles and the way our muscles are formed.  They’re more catered to explosiveness.  There’s two sides of gymnastics.  There’s that graceful and elegant side, and there’s the explosive side.  Both can be successful.  But you see more, when it comes to international gymnastics, explosive is better in my opinion.  Although the creative and beautiful side is important, it doesn’t always score as well because it’s harder to get the difficulty value needed.  It’s a lot easier to get it in tumbling, which is why people like Simone Biles do so well, because she is absolutely off-the-charts amazing with her tumbling and the type of skills that she’s doing.  A lot of times it is more exciting to watch Black athletes because we are so explosive.  We tumble higher and everything is just a little bit bigger.”

As more Black women are succeeding at the sport, Black culture is becoming more prominent in gymnastics with Black music and dance infused into the floor routines.

“That has been a trend for at least the last five years, where its more hip hop,” Tarver said.  “Now we’re starting to see where they’re starting to incorporate more of Black culture into the dance; some stepping as you would see in the fraternities and sororities, as well as African dancing.”

With Black women playing a prominent role in the recent social justice movement, many Black gymnasts are using their platform during performances to express their views.

“You see a lot of Black gymnasts in the NCAA who have a message,” Tarver said.  “You’ll see the message in their performance.  It’s exciting to see.”

“Gymnastics is a very time-consuming sport,” Tarver said.  “Those that reach the higher levels are usually working anywhere from 20-30 hours a week.  So they have to learn time management.  They have to figure out how to get their homework done.  They don’t have as much time to study, so they can’t put things off the way that other kids might be able to.  These athletes will come home from practice at 7, 8, or 9 o’clock and then they’re doing homework.  Gymnasts tend to be A-type personalities.  So they’re perfectionists and that carries over from gymnastics into academics and other aspects of their lives.”

One major hurdle that makes it difficult for a lot of Black children to participate in gymnastics is the cost of the sport.

“It is a huge issue,” Tarver said.  “It’s a very expensive sport.  The training time that is needed and depending on the level where the kids are, it can be as much as a $1,000 a month for certain training at certain gyms at certain levels.  So it can be quite expensive.  How to get around that?  Some gyms have scholarships.  Some gyms work with parents if they see that the kid is talented.  But it does not open itself up for the masses when it comes to finances because gyms are private businesses and they have to survive.  But there are gyms that are set up to take in kids that have less money, but there’s not a lot of those out there.”

To help spread the awareness of the sport, Fisk University has partnered with Brown Girls Do Gymnastics (BGDG), which has advocated to give gymnasts of color the choice to continue their athletic careers in the safety of inclusive spaces like HBCUs.

“In the very near future, Black and Brown gymnasts will no longer have to choose between HBCUs and gymnastics,” said Derrin Moore, the founder and president of BGDG.  “Now we begin the process of building the program from the ground up and recruiting the nation’s top Black gymnasts.”

College gymnastics has seen a 4.5 percent increase in Black gymnastics participation from 2008-2019, in large part because of the success of Olympians Simone Biles and Gabby Douglas.  With BGDG’s annual conference inspiring young girls of color and giving them exposure to predominantly Black gymnastics spaces, experts like Moore predict these numbers will continue to rise.

“Representation tells potential athletes ‘Yes, this space is for you too,’” Moore said.  “The Brown Girls Do Gymnastics Conference opens minds and like other sports,it opens opportunities.”

This partnership is helping Tarver lead Black gymnasts to HBCUs.

“I’m currently recruiting athletes for our team, and none of the girls would have looked at an HBCU before this because they all wanted to do gymnastics,” she said.  “That was a vital part of their college experience.  Before Fisk, they did not have that option.  So there are a lot of young girls out there who want to have the HBCU experience but they did not have that option.  But now they will.”

Other HBCUs are watching Fisk’s gymnastics program with the goal of creating their own.