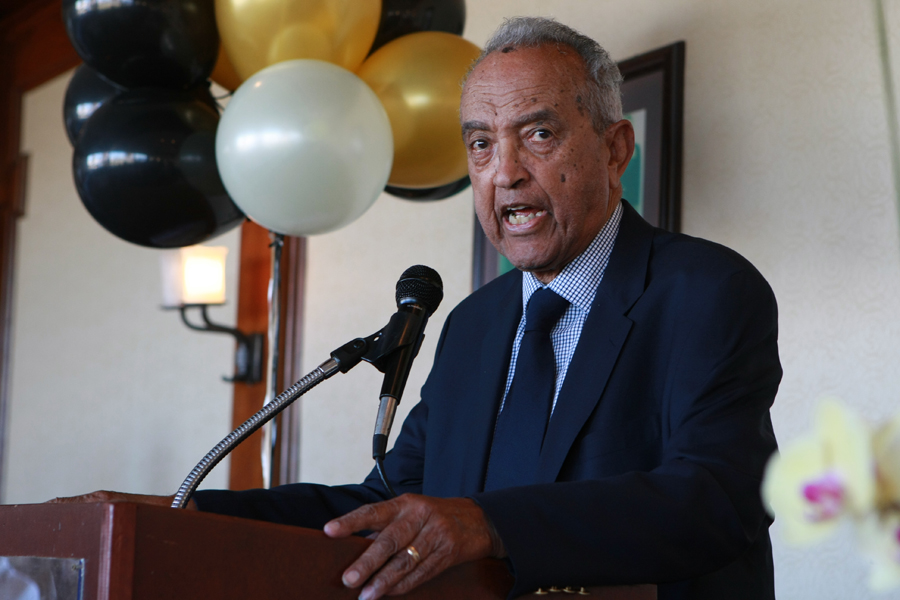 Arthur Lewis tells a few jokes to his family and friends at the Proud Bird.

**To have your event (wedding, banquet, luncheon, etc.) featured, email This email address is being protected from spambots. You need JavaScript enabled to view it.

Arthur Lewis is a rare breed. A decent amount of people who live in Los Angeles are from another part of the country, or at least their parents are. But Arthur was born in this city in 1925, and has lived just about his entire life here.

Arthur grew up along Central Avenue. His father passed away when Arthur was only two-years old, so he was raised by his mother Verna and other family members. He attended Jefferson High School before heading to UCLA. While a student in college, he operated Lewis Vending Company, where he supplied juke boxes, cigarette machines and arcade games to fast food establishments such as Fatburger and Golden Bird, and other businesses. After college, he became the first black owner of an Orange Julius, which was near Central Ave. and Vernon Ave.

Arthur went on to become an accountant.  He worked for Golden State Mutual Life Insurance Co. before being drafted into the U.S. Army in 1952.  Upon returning to public life, he worked as an auditor for the U.S. Defense Dept and the Dept. of Energy for 30 years.  After retiring from working for the government he founded Lewis Tax Service, with an office on Martin Luther King Blvd., just east of Crenshaw Blvd.

Arthur is a member of Alpha Phi Alpha Fraternity Inc. He crossed through Alpha Delta Chapter at USC in 1946, and he is a founding member of Gamma Xi Chapter at UCLA. He is a long time member of Beta Psi Lambda Chapter, which is the alumni chapter in Los Angeles.

Arthur celebrated his birthday with family members and long time friends at the Proud Bird.