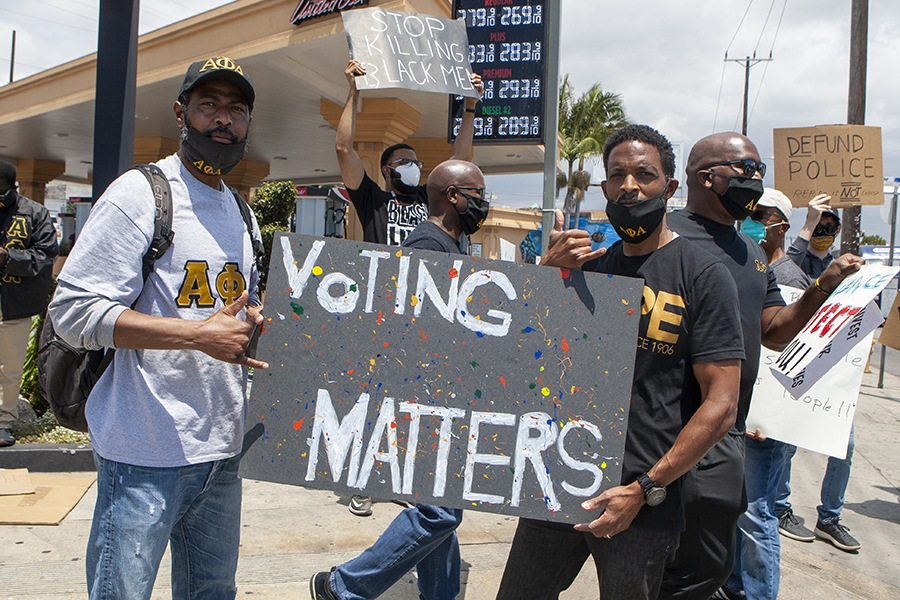 African Americans gained American citizenship and the right to vote when the 14th Amendment was approved by Congress in 1866, then ratified in 1868.  During this period, known as Reconstruction, Blacks experienced the benefits of enfranchisement at the polls and the subsequent election of Blacks in state legislatures and even Congress.

However, a concerted backlash would begin to undo Reconstruction-era gains through regional laws, known as “Black Codes,” and the rise of White supremacist organizations like the Ku Klux Klan.  For example, poll taxes, literacy and good character tests would inadvertently marginalize Blacks due to financial and academic limitations.  This would eventually evolve into a system of “Jim Crow Laws” and practices which would leave Blacks disenfranchised and in a position of second-class citizenship.

Two decades into the 21st century, 162 years after the 14th Amendment was ratified, unnecessary hurdles are still impeding Black people’s right to vote.  These not-so-new voter suppression tactics demand a plan of action that will guarantee Blacks, and other disenfranchised groups their rights as American citizens.

Alpha Phi Alpha Fraternity, Inc. has been a major voice in the Black community, protesting against voter suppression.  A Voteless People is a Hopeless People was established in the 1930s as one of the national programs of the fraternity.  Its major objective was to increase voter registration and participation.  By the 1990s, the focus was broadened to include political awareness and empowerment.

“The foundation of American democracy is the right to vote,” said Everett B. Ward, Ph.D., General President of Alpha Phi Alpha Fraternity, Inc.  “We must never forget that African Americans endured economic and political reprisals and lost their life for even attempting to register to vote. Now more than ever before the right to vote must be protected. In honor of Ahmaud Arbery, Breonna Taylor and George Floyd we must protect the right to vote and march to the polls."

The fraternity’s Los Angeles alumni chapter, Beta Psi Lambda, has created the Fighting Against Voter Suppression (FAVS) 7,000 voting initiative to combat voter suppression.  This initiative is dedicated to fraternity member Roye Love, who is a long-time member of Beta Psi Lambda and a retired officer of the United States Army.

Born and raised in Monroe, Louisiana, Love’s personal encounters with voter suppression have contributed to his unwavering advocacy for social justice equality for the African American community. In a recent interview with fellow Chapter member Sedwitz Dumont, Love recalls an incident which occurred in Louisiana in 1958 when, shortly after returning home from active military duty, he attempted to register to vote.

At the county courthouse, Love was given a literacy test.  After passing with flying colors, he was asked to show proof of residency ending with a former White employer having to vouch for him.  By the time he got home that day, his entire community had been informed about what had taken place, with many criticizing him for “crossing the line.”  He would go on to discover that he had been ostracized by pretty much his entire town.  When he tried to find a job, he was told at the employment agency by the office manager, “I know you n*****.  I’m not sending you nowhere!”  After three months of working odd jobs, a discouraged Love boarded a Greyhound bus with $50 and journeyed to Los Angeles in search of a better life.

Love’s story inspired Dumont, along with other members of Alpha Phi Alpha Fraternity, to create the FAVS 7,000 voting initiative in 2019 to “Fight Against Voter Suppression.”  As an important part of the A Voteless People is a Hopeless People program, it is their goal to increase the number of registered voters by 7,000 people at every polling place around the nation.  It is named in honor of the struggles of Love and many like him.

“This is a very simple solution to the very complex problem of voter suppression, and all of the different insidious ways that some go about altering elections,” Dumont said.  “Whether it’s the elimination of early voting, or the closing of polling places making people wait longer in lines, or people not being able to find their polling place at all, the effect of these measures is to discourage people from voting.

“Alabama is a good example of a state employing these voter suppression techniques. Often not only are they requiring voter ID, but then the places that one would go get a voter ID are frequently closed down.  In order for a person of color (or a person who belongs to another disenfranchised group) to obtain that voter ID, long travel times are often required for them to do it.  Once the necessary ID documents have been obtained, then some counties may have drastically reduced the number of polling places.  You can only imagine the gridlock that it creates and how long the waits have been or are likely to continue to be.”

While the fraternity is a nonpartisan organization, they do support the best interests of Black people, and they fight against racial injustice.  Many of the voter suppression practices have been coming from conservative politicians.

“A lot of these voter suppression efforts are focused on African Americans, communities of color, and young people,” Dumont said.

Dumont pointed out that states with Republican governors and majority Republican led legislators are more likely to apply voter suppression methods.  Those methods do not stop anybody from voting, but simply make it much more difficult for people to become registered and get to a polling place.  The goal of these roadblocks is to discourage enough potentially Democrat, independent or moderate Republican voters from actually voting in order to help more conservative Republicans win elections.

Mail-in voting (also known as absentee ballot) has now become another target for proponents of voter suppression, and many Republican politicians have come out against it.  President Donald Trump claims that voter fraud was rampant in the 2016 Presidential election.  However, a commission that he formed did not find widespread voter fraud and did not find very many cases at all.  Trump is now claiming that mail-in voting will lead to voter fraud, even though many Republicans, including himself, have taken advantage of absentee voting, which is done by mail.

“Every time that there is something easier or simpler, they try to muddy the waters,” Love said.

Another unforeseen hurdle that the FAVS initiative addresses and that will likely be faced by all voters in 2020, is the ability to get to polling places because of the COVID-19 pandemic and the potential for continued sociopolitical protests.  Even as states around the nation begin to reopen, the coronavirus will still most likely be an issue in November.  Mail-in ballots would allow people to cast their vote while maintaining social distancing.

“As the nation begins to resume business-as-usual, we are seeing increasing levels of COVID-19 infections, and if this continues through to November, I don’t see people being very enthusiastic about being around large groups of people that they don’t know,” Dumont said.

California, Michigan and Wisconsin experienced similar issues in this past election cycle earlier this year.  There were complaints that the new electronic ballot boxes dramatically slowed down the in-person voting process.  Many polling places reported that the lines to vote were more than two hours long, which discouraged many people from voting.  Mail-in voting eliminates that issue entirely.

For more information about the FAVS 7,000 voting initiative and about mail-in voting in your state, visit www.7000voters.com.  Also follow FAVS 7,000 on Facebook.