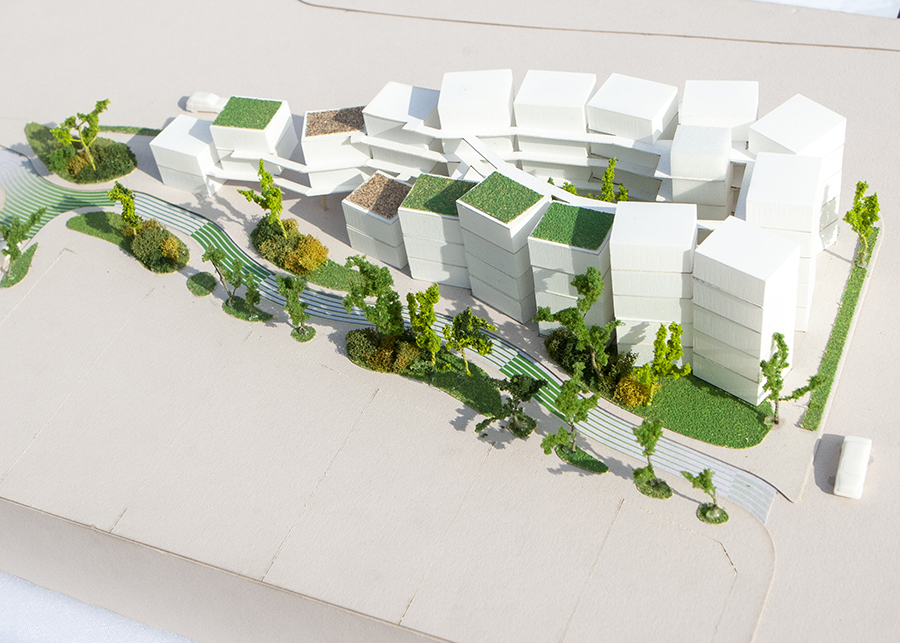 The designers of the development will ensure that the exterior of the project is aesthetically pleasing. Photo by Jason Lewis

As the City of Los Angeles continues to work toward solving the complicated homelessness issue, they have had to come up with some innovative methods to be able to quickly build housing.  One of the latest ideas is to stack shipping containers on top of each other to make an apartment building.

But this is more than just an idea, as Mayor Eric Garcetti and Councilmember Marqueece Harris-Dawson recently broke ground at the intersection of Imperial Boulevard and South Broadway for a permanent supportive housing development that will hold 54 one-bedroom apartments.  The initial thought of using shipping containers may sound a bit crude, but when walking into one of the finished units, it is pretty amazing to see a fully furnished apartment inside with the amenities that any new apartment would have.

“It’s a brand new apartment that you can build in half the time and for a fraction of the cost,” Harris-Dawson said.  “With the situation that we have with homelessness, we have to deliver quick.  Shipping containers allow us to deliver quality in a short amount of time.”

The site sits adjacent to the 110 Freeway and 105 Freeway interchange, and the project is called the Isla Intersections.  Each apartment will be comprised of three modular units that will be built on-site within a remarkable 30-day time period.  This project is being developed by Clifford Beers Housing and American Family Housing.  Lorcan O’Herlihy Architects, the designer of the project, will ensure that the exterior of the project will be aesthetically pleasing.

The towers are intentionally scattered and stacked enclosing a sequence of pocket parks that connect the landscape to the private residences. The result is a communal outdoor space within the building and the community.

Isla Intersections will bring the community together by including a shared street and public space named the Annenberg Paseo, a public park designed to increase traffic safety and community engagement.  This marketplace and public park will also serve as a “green lung.”

“The Annenberg Paseo is part of our mission, which is always to help a community,” said Cinny Kennard, executive director of the Annenberg Foundation.  “We’re here to come in when you need us.  This is just a new wonderful example coming into a community and aligning with permanent housing, but also being able to provide an area with safe spaces for the neighborhood.  Space where they can enjoy and come for peace and quiet.”

The development also serves to address some of the needs of local residents.  Rooftop farms and edible gardens will also supply popup farm stands that can provide fresh produce at weekly farmers’ markets.  This project also has the chance to become part of a larger network of urban farms in the area, preserving the tradition of community farming in South Los Angeles and bringing affordable produce to a “food desert.”  The ground level along the Annenberg Paseo will provide a number of storefront spaces for retail, small business incubation as well as administrative offices providing supportive social services such as job training, mental health counseling, and life skills.

This project will be funded in part by funds from Measure HHH.  The measure, which was passed in 2016, raised $1.2 billion to help finance the construction of 10,000 units of affordable housing.  According to Garcetti, there are 21 HHH projects under construction in Los Angeles, and there are nearly 150 supportive housing projects that are either already under construction or approved for funding.  Ten Bridge Home facilities have been completed and 26 of the supportive housing facilities will be complete by this coming June.

Over the last three years, there have been more approved projects to house the homeless than in the previous 30 years combined.  The mayor also pointed out that providing housing is only one step in solving the homelessness problem.

“We need to get people indoors first, but if you don’t want them to go back outdoors, we have to treat them,” Garcetti said.  “We have to embrace them as a community.  The mental and physical health problem; the trauma.  Because at it’s simplest, what is homelessness?  It’s trauma meets high rent; trauma meets insufficient housing.  If you don’t address both of those things together, you will never solve this problem.”

Many people and media critics have questioned the city’s and county’s use of the money that has been generated by Measure HHH and Measure H, because the homelessness problem appears to be as bad as when those measures were passed in 2016 and 2017.

“It’s a painfully long process,” Harris-Dawson said.  “I agree with everybody who says that it takes way too long, because it does.  Our system needs major reform.  But now the bow is about to break.  You’ll see projects all over the city and all over the district from the valley all the way to the harbor, projects will be opening soon.  But getting to this point will be really tough.”