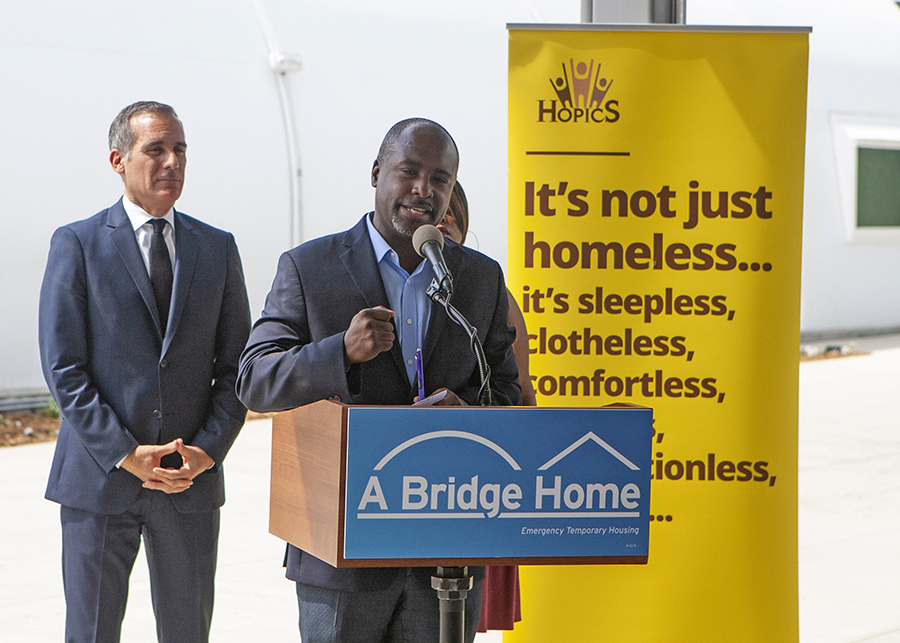 The first of four South Los Angeles sites will serve as a supportive housing facility for 100 individuals experiencing or transitioning from homelessness. 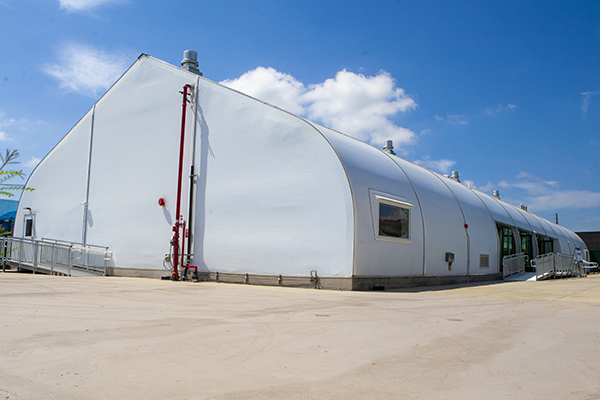 Los Angeles Mayor Eric Garcetti and Councilmember Marqueece Harris-Dawson opened a new emergency bridge housing facility that will provide beds for 100 homeless Angelenos at a time, and offer on-site supportive services to help them transition into permanent housing. The project is the first of Mayor Garcetti’s “A Bridge Home” sites to open in South Los Angeles.

Harris-Dawson, who chairs the homeless and poverty committee, authored Proposition HHH, which is giving the city $1.2 billion to build thousands of units of supportive housing over the next decade.  It was approved by voters in 2016 and it is the largest investment towards ending homelessness in the nation.  While those projects are being developed, the bridge homes address the homeless crisis now.

“A couple of us, we said, ‘Mayor, we have to do something between now and the time that HHH housing comes on line because it’s not okay to leave people on the streets,’” Harris-Dawson said.  “He right away said that we’re going to do a program called Bridge Housing.  That housing is meant to hold people over until we can get permanent housing for them.”

The site of this new bridge housing facility in South Los Angeles is on St. Andrews Place, not far from Western Avenue and Slauson Avenue. This site will provide housing for 63 men and 37 women currently sleeping on the street or in their cars in South LA. It will include a community room, kitchen, garden and dog park. Additionally, services at the facility will be provided by the county through funding from Measure H, the landmark homeless services initiative approved by voters in 2017.  Those funds will allow Homeless Outreach Program Integrated Care System (HOPICS) to provide mental health, substance abuse and job training resources on site for every resident.

While Councilmember Harris-Dawson has made it a priority to solve the homelessness issue, he credits Mayor Garcetti with leading the way.

“There is no other civic leader; there is no other municipal executive anywhere in the United States that has done more to end and confront homelessness than our own mayor, Mayor Eric Garcetti,” Harris-Dawson said.

Mayor Garcetti sympathizes with people who are struggling in Los Angeles.

“It can be hard out there,” Garcetti said.  “It’s hardest for our brothers and sisters who are unhoused.  We have a city that’s added more jobs than it’s ever had before.  We’ve cut unemployment in half.  We have more visitors and more investment.  But there are too many people who have been passed by as we’ve all been moving forward.”

“And it can be hard in here,” Garcetti said.  “It can be hard working on an issue like homelessness.  Who is responsible for homelessness?  Is it the federal government when they cut our housing or do they think that the trickle down economics will lift everybody up decade after decade after decade?  No investment in public housing.  The war on poverty was just a surrender to poverty it feels like.  It can be hard at the state level, as we’ve had ups and downs with our economy.  Some folks saw this as a local issue and not a state wide one.  But we lost our state affordable housing dollars.  And it can be hard on the city and county levels, when we’re the ones who have to, as (Los Angeles County) Supervisor Sheila Kuehl said, we’re like the ones behind the horse at the parade.  We didn’t cause it to happen, but we have to clean it up.  And it can be hard for a community because those Angelenos who are unhoused are people that we know.  They have names, they have families, they have histories, they have struggles, and they have communities.”

In the next 12 months, 21 bridge homes will be opening throughout Los Angeles, and through Measure HHH, 1,511 projects are in the pipeline.  For now, many people without homes will have a roof over their heads.

“This is a place to restore a sense of safety,” said Veronica Lewis, HOPICS director.  “For many of the men and women who have lived on the streets for months and in most cases years, they have not had a good night’s rest in a long time.  They’ve been in survival mode for a long time.  Many of the men and women who are coming here never thought that they’d be indoors.  Many of the folks have felt hopeless.  So we are restoring a sense of hope by moving them from the streets to this place.  And also with all of the housing navigation support, we hope that one day these people will hold the keys to their own place once they move from here.”