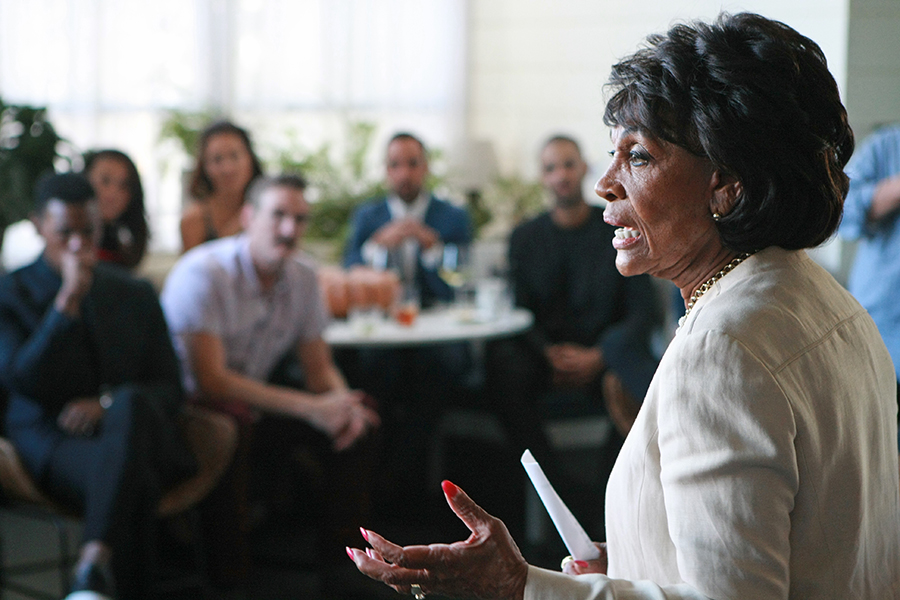 Rep. Maxine Waters gives a speech at Farmhouse at the Beverly Center. Photos by Jason Lewis

The congresswoman continues to speak out against President Donald Trump, and she is now empowered to investigate him.

After two years of intense anticipation, the Democrats came out ahead during the 2018 midterm elections.  While they were unable to gain control of the Senate, they were able to flip control of the House of Representatives.

Rep. Maxine Waters, D-Calif, has been one of the most vocal Democrats since President Donald Trump was elected in 2016, and she did not hold back at a recent reception that was hosted in her honor by Rodney Franks, CEO of RDF Consulting, and Dr. Lemmon McMillan, a general practitioner in South Los Angeles.

While addressing her supporters, Waters touched on several Trump related topics, including Trump’s presidential campaign, his financial controversies, the Russia investigation, and his treatment of liberal media.

“I have been very upset for a long time,” she said.  “Since he was sworn into office.  I started to understand who he was during the primary elections.”

Waters pointed out controversies such as Trump saying that he grabs women by their private parts, and his mocking of the other Republican candidates for president.

“I thought that this was a joke,” she said.  “This can’t be somebody who is running for the Presidency of the United States.”

During Trump’s campaign and after he won the election, Waters started to investigate him.  She was disturbed by what she found, but with the Republicans in control of the presidency, Senate, and Congress, her efforts were stonewalled.

“I started to look at his relationship with Deutsche Bank (in Germany) and to money laundering,” she said.  “But we (Democrats) don’t have the majority, so it’s very difficult to get the information.”

Waters said that she contacted Steven Mnuchin, United States Secretary of the Treasury, who is in charge of initiating the sanctions against Russia.

“They will not share that information with us because they are empowered,” she said.

While it appeared that many Democrats took a backseat since Trump was sworn in, waiting for the midterm elections, Waters has become a national celebrity by pushing back against him.

Waters said that Trump rallies his base by attacking Democrats, and by feeding his supporters, many of which are in small towns across the nation, with negative information.  She said that he makes them believe that Democrats are the cause of this country’s problems.

“I have feelings for those people who are living in small towns and rural areas,” she said.  “Folks who perhaps lost the only factory in town.  They don’t have jobs.  They can’t get medical attention, and maybe they have to drive miles to get to a clinic.  I understand that.  And basically, that’s what Democrats stand for.  We fight to help all folks.  We really do fight to create the possibility of getting resources to everybody.  We really do believe in the government having a role in doing this.  We fight for resources for people who deserve to have help from their government.

“Since 2008, when we entered into a recession, we have people who are hurting.  In those outer areas where the factories and coal mines have closed down, they’re angry, and he’s speaking on that.  He’s saying to them, ‘I’ll tell you who your problems are.  Your problems are those people coming from other countries, and I’m going to have a travel ban.  I’m going to build a wall.’  And they eat it up.”

Trump’s attack on liberal media outlets has led many people on the left to believe that he wants to to be like a dictator.

“This is really dangerous, because what they’re trying to do is weaken all of the media that does not support him,” Waters said.  “And of course he ‘owns’ Fox.  He gets his speaking messages from Fox every morning.  What they’re trying to do is have people believe that the Russia investigation is a witch hunt; that the media can’t be trusted, and that’s one of the first things that you do in a communist society.

“It looks as if this president wants to be a dictator.  He loves Kim Jong-un because he says that he controls his people.  He loves the way that Vladimir Putin can control.”

Waters questioned Trump’s story about being a self-made billionaire.

“He calls himself a developer, but he didn’t make any money developing,” she said.  “He started with his father’s money, which he lied about.  He lies all the time.  It’s his branding that he’s made money off of.  He’s had a constant life of intimidation and bullying.  Not paying his bills.  We have contractors and sub-contractors who are still filing against him.  And then you saw the so-called Trump University that he had, where he cheated folks who wanted to become developers, just like him.  But they didn’t have accredited teachers, and he never showed up.”

Much of Waters’ discussion was directed at Trump and the Republicans, but she also had some words for her own party.

“I believe that we have to continue to resist.  I’m hopeful that the Democrats, and even the independents and others, will, after the midterm elections, feel a bit more powerful.”

Waters is the highest ranking Democrat of the United States House Committee on Financial Services, which oversees financial services industries including securities, insurance, banking, and housing industries.  As the ranking member, she is inline to become the head of the committee.

“We have the opportunity to chair some of these committees, and to take on the efforts to reveal who he is,” she said.  “I have the opportunity to be the chair of the financial services committee.  That means all of the hedge funds, all of the equality funds, insurance companies, everything.  And we have some other things that are not directly related to financial services, like HUD.  I can’t wait to get rid of Ben Carson and Mnuchin the treasurer.”

Waters has been banging the impeach President Trump drum since he was sworn in, and now she has the fire power to pursue that.