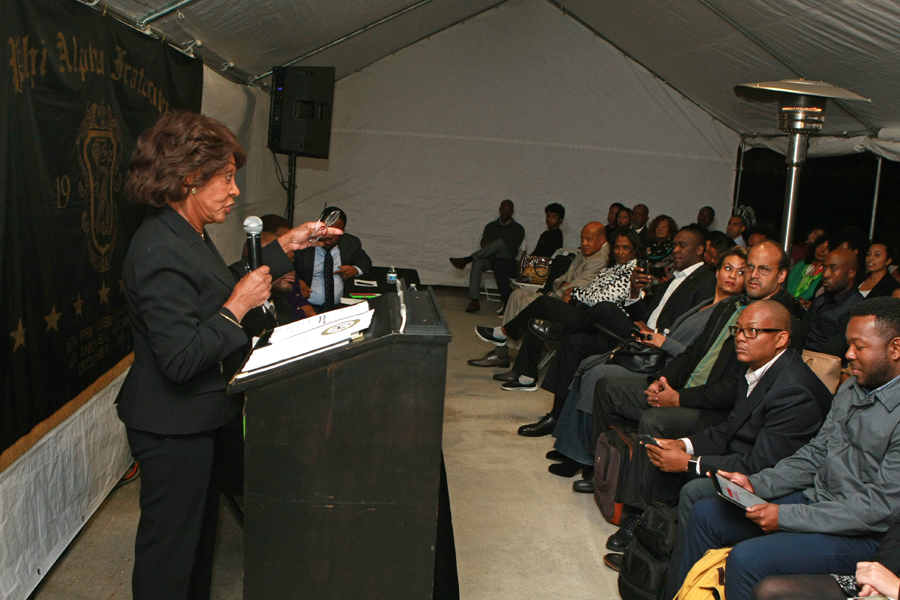 After one of the most polarizing presidential elections ever, many people are forced to live with an election result that did not go their way.  Minority voters who supported Democratic candidate Hillary Clinton, or a third-party candidate, have many questions and concerns about how a Donald Trump presidency will affect them.

The concern was so great that Congresswoman Maxine Waters (D-Los Angeles), Congresswoman Karen Bass (D-Los Angeles), and Assemblyman Sebastian Ridley-Thomas (D-Los Angeles) addressed community members on Nov. 22 at the Alpha Phi Alpha House in View Park-Windsor Hills.  The local politicians spoke about how Trump won the election, what type of federal policies we can expect from the president-elect’s administration, how his appointments will affect us, and the conflicts of interest that could influence how Trump makes key decisions.

Both Waters and Bass alluded to race playing a role in Trump’s victory, and Waters spoke about people’s displeasure with President Barack Obama as a factor in this election.

“I think what happened was, whites in little towns and cities outside of major urban areas, many of whom voted for the first time, were turned on by Donald Trump,” Waters said.  “They were mad at everybody, including Obama, and they turned out to vote in large numbers.  They ended up exercising the kind of power that was not thought about.  The targeting (by Clinton) had not been done in these areas.

Bass said that many Trump supporters had a displeasure with the raised rates of the Affordable Care Act, also known as Obamacare, and she pointed out how the Republican Party used it to influence people to vote for Trump.

Immigration was a hot-button issue that Trump used to rally his supporters, with most of the attention on that issue directed toward Muslims and Latinos.  Waters spoke about Trump’s plan to suspend immigration, which he has said is a ‘quality of life’ issue.

“Now that’s a lie,” Waters said.  “Really he was talking about Muslims.”

The immigration issue can divide minority communities across the nation, as many African Americans and Latinos reside in the same areas, and Latinos are not the only immigrants in those neighborhoods.

“We don’t want to have our communities divided between black and brown,” Bass said.  “But we need to stop acting like all immigrants are Latinos.  There are plenty of black immigrants that come from the Caribbean, Central America, and African countries.”

Bass said that she was proud that minorities “did not take the bait” and allow Trump’s campaign to put African Americans and Latinos at odds with each other, but she spoke about how negative racial sentiments among some white people have come to the surface.

“He unleashed white supremacy sentiment that had always been there,” Bass said.  “But it was (in the past) socially unacceptable to be that way.  But now he’s made it acceptable and he’s normalized it.”

Bass pointed out that the Southern Poverty Law Center reported that there were 800 examples of hate crimes in the three weeks after the election.

“Folks (are) feeling embolden, like they haven’t felt embolden before,” Bass said.  “I’m riding my bike on the beach, and somebody called me the N-word.  Here in L.A!”

Trump has opposed many of the decisions that have come from Obama’s administration, and he is looking to make a number of changes.

“He’s going to withdraw from the Trans-Pacific Partnership and renegotiate the terms of the North American Free Trade Agreement,” Waters said.  “Basically, what he is saying is that we are all stupid.  And the (current) president of the United States is stupid.  And they don’t know how to bargain or trade.  He says that this trade agreement will cost us jobs, and he knows how to negotiate better than anybody else.  Everybody else is stupid.”

Repealing Obamacare has also been on Trump’s agenda.

Issues with law enforcement have been a major issue for minority communities for many years.

“He described our communities as if we’re all living in hell,” Bass said.  “We can’t walk outside here because we’re going to get shot.

“He wants more money for law enforcement.  He believes in stop-and-frisk.  He said that.  He wants to make sure that we have more stop-and-frisk, and that’s going to keep our communities safe.

“For police misconduct, he says absolutely nothing.  But you can imagine what it would mean to have Jeff Sessions as the Attorney General.”

Waters is also concerned about Sessions, who is a Republican Senator from Alabama.

“We’re going to go backwards with Jeff Sessions,” Waters said.  “He has a history.  He has defined himself.  He hates the NAACP, he’s made bad remarks about them, and about the ACLU (American Civil Liberties Union).  At a time when we were mourning those nine (black) people who were killed at Emanuel AME in South Carolina, he was saying that we should honor the Confederate flag.”

Waters also has issues with the selections of Steve Bannon as Trump’s chief strategist and Michael Flynn as the National Security Advisor.

“Bannon is a real right-winged conservative who has defined himself in so many ways,” Waters said.  “He served as the executive chairman of Breibart.com.  It’s a conservative, alt-right movement.  It’s those who believe that whites should run this country.  They don’t like the fact that Barack Obama was elected president twice.  They don’t like the appointments that the president has made for any African Americans in his administration.  They basically believe that African Americans have gotten too much, they don’t deserve it, you’re all affirmative action, and they’re going to take this country back.

“Flynn is a right-winged conservative.  He was fired from his post as director of the Defense Intelligence Agency in 2014 because of poor management style and controversial Islamophobia remarks.  Michael Flynn has described the Muslim faith as a political ideology that presents a great threat to the United States.  He’s even gone as far as to call it a malignant cancer.”

Waters said that Flynn has received payments for speaking with Russia Today, which is an international television network owned by the Russian government.  She also pointed out that Trump has spoken fondly of Russian President Vladimir Putin.

“Donald Trump has called him a great leader,” Waters said.  “In addition he said that he is a friend that he can get along with.  And he said that when he becomes president, he’s going to straighten out these relationships with Putin and Russia, because President Obama didn’t know what he was doing.”

Waters discussed conflicts of interest that Trump has been trying to downplay.  She talked about a hotel that Trump has built that is not far from the White House.  The property is leased by the General Services Administration (GSA), which is an independent agency of the United States government.

“Donald Trump is arguing with the GSA about the value of the property, and how much taxes he has to pay,” Waters said.  “As the president of the United States of America, who will appoint the head of the GSA, guess what could happen?  He could intimidate them and make sure that he gets what he wants.  He’s going to have a lot of power.  And he’s told us who he is.  He’s defined himself in ways that you ought to be afraid.”

Waters talked about another potential conflict.  Trump owes a reported $300 million to the German financial institution, Deutsche Bank.  The bank is being investigated by the U.S. Department of Justice.  The sum total of the fines faced by the bank threatens its financial solvency.  The fate of one of the world’s largest financial institutions will soon rest in the hands of Sessions, who will report directly to President-elect Trump.   That could lead to a favorable result for the bank and for Trump.

Ridley-Thomas has concerns about how Trump’s presidency will affect the state of California.  Propositions 52, which increases health care access to the uninsured, and 55, which extended the personal income tax increases on people who make more than $250,000 a year to generate funds for education, were passed on the November ballot.  Trump’s policies could affect the funds generated by these propositions.

“Any reduction in the support that the state gets from the federal government in critical areas such as health care, housing, and economical development, will jeopardize the investment that we have in our schools,” Ridley-Thomas said.  “Because we’ll have competing priorities.

“When you have competing priorities, you won’t have enough, and everybody takes a hit.  Sometimes good programs take a hit.”

Proposition 55 extended Proposition 30, which was approved in 2012, a year after Arnold Schwarzenegger’s term as California governor ended.  Ridley-Thomas said that Proposition 30 “has helped, for the last five years, eliminate our state’s structural defects.”  He went on to compare Trump to Schwarzenegger.

“The policies that Schwarzenegger promoted helped exacerbate our finances,” Ridley-Thomas said.  He was somebody who had a lot of bravado.  He showed up and said, ‘hey look, I’m a business man,’ when that was really just a marketing agent.  He hadn’t read a budget.  He didn’t understand how to manage a state.  He wasn’t an administrator.  He hadn’t dealt with appointments and he had conflicts of interest.  Sound familiar?”

Ridley-Thomas also has concerns about how a Trump administration will affect the homeless problem in Los Angeles.

“Homelessness has went down in the rest of the country, but it’s up on the West Coast,” he said.  “Why would we let that continue?  Trump has said nothing about the challenges that those who are dealing with housing insecurities have.  It might be because he was hit with a federal housing discrimination suit back in the ‘70s.  Maybe he doesn’t want to talk about his relationship to housing.”

While Trump will be the president for the next four years, these three politicians are committed to fight on behalf of the communities that they serve.

“When we think about how we’re going to respond, we went through a week or two weeks of grieving,” Bass said.  “Okay, we’re done with that.  It’s time to fight.  It’s time to use Donald Trump to re-energize a movement to fight for social and economic justice.  To fight against his policies.”

For more information about these issues, and to stay updated with these politicians, contact them at: