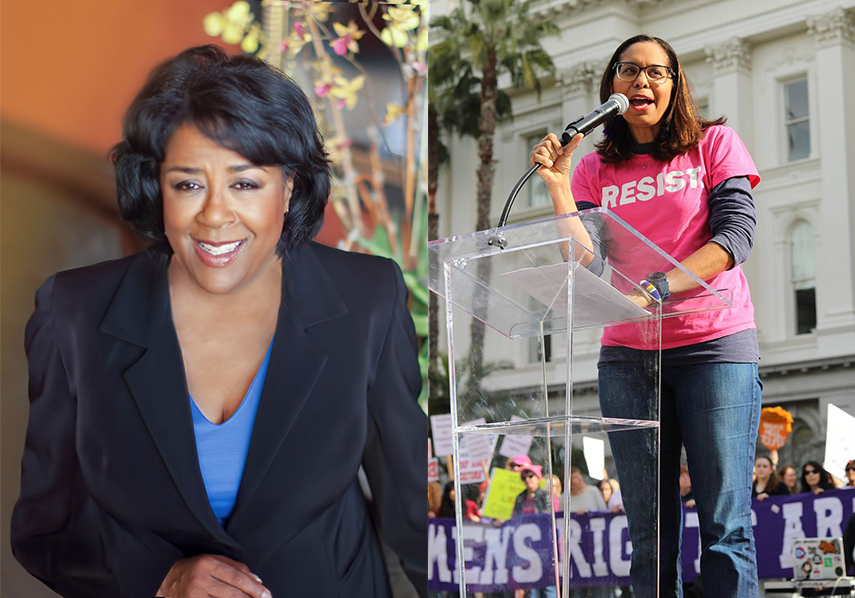 Similar to Bass, both Perry and Kamlager have a lengthy history of working in Black communities of Los Angeles, and they spoke about how they will address pressing issues on a federal level.

The most pressing issue in the Los Angeles area is affording housing.  The homelessness issue has been a crisis for several years, and issues surrounding gentrification are making local communities unaffordable for long-time residents.

“I represented Skid Row for 12 years, and I placed an enormous amount of focus in Skid Row and South Los Angeles on the issue of homelessness,” Perry said.  “Even though African Americans are about 10 percent of the population in the county of Los Angeles, they were incredibly over-represented in the population of the people who are homeless and unhoused by over 40 percent.  So this was always an issue that required my attention and my focus.”

Perry took a proactive role to help people because, as she said, the city of Los Angeles and the county of Los Angeles were not working well together.  That led her to create her own programs.  She established the largest year-round funded shelter on Broadway Boulevard and 38th Place, in a light industrial area.  At that location, a warehouse held 650 beds with support services on site.

“The support services gave law enforcement an alternative to 5151-ing (detaining people for mental disorder) folks and doing the 72-hour psychiatric lockup, and then putting them back out there on the street,” she said.  “People were able to stay there for up to a year and go into recovery, receive medical treatment, mental health services; all of the things that they needed right there on site to prepare them to go into housing and to be able to successfully stay in that housing and thrive.  And that still exists.”

Perry intends to take her experience with this issue to Congress, where she will be able to access federal funds.

“I intend to take all of that experience and take it to scale as a congressperson in Washington, D.C.,” she said.  “I will work together with (federal agencies) Health and Human Services, Housing and Urban Development, and with the Economic Development Administration to create funding streams to be able to support the further development, growth, and expansion of a network, not just in the 37th district, but throughout the City of Los Angeles to create a more expeditious and straight-forward approach to getting people off of the streets, into a bed, into treatment and recover and to move them forward.”

While the homelessness crisis is Los Angeles’ most pressing issue, many people who are employed are struggling to afford the rising rents and they are being priced out of buying a house.

“Our current housing crisis has been decades in the making, and responding to it has been my top priority,” Perry said. “I have aggressively worked with non-profit housing developers to build housing and to develop policies to expedite construction.  If you’re serious about helping people and achieving true social justice, we have to meet people’s basic needs.

“I’m a big believer and historically have supported first-time home-buyers programs and programs geared to create new housing stock that is affordable to encourage young people and also people on fixed incomes to be able to rent to own, which is something that people don’t talk a lot about.  It’s another pathway to homeownership.

“It’s a process of educating people, and then creating incentives through legislation to try to make sure that people can stay in their communities.  I, as an elected official, a legislator and a public servant, have to also be mindful that we have to continue to build for the future and for younger people; to create those opportunities through support and through subsidies so that we can continue to grow the housing stock for the generations coming online now so that they’ll have a place to live.”

“Los Angeles needs affordable housing,” Kamlager said.  “Housing for low-income people across Los Angeles County is severely overcrowded, racially segregated, and often not linked to high quality resources like transit, jobs, schools or parks.  The COVID-19 pandemic has made even clearer what we already knew to be true: our Black, Latino, and low-income communities are being forced to make untenable choices in where and how they live.

“I helped find funding for a net-zero affordable housing development in the heart of my district, with units renting for $400-1200 a month. This was a partnership that braided federal and state dollars and shows what is possible when governments work together; we can attack homelessness and climate change.

“California is on the brink of becoming the 4th largest economy in the world. While Washington thinks that we are an outlier on homelessness and need to find our own answers, I am looking forward to taking my skill-sets and track record to Congress to remind them that we have a national obligation to help solve this issue here.”

The typical response to high crime areas is to send more funds to law enforcement, but gang interventionists and people who work with children in after school programs believe that if their programs received the proper amount of funding, they can give people other options besides a life of crime.

“These approaches have been tried and historically been very good for young people,” Perry said.  “It’s a way to de-escalate violence in our community.  It’s also a way to make up for what the children have lost in terms of funding in the public school systems, particularly in terms of arts, cultural, and productive activities that go into the arena of vocational activities.  One program that is amazing to me is the Hospitality and Training Academy.  The amount of people who enter those programs and really catapult themselves into a different level of skillset and employability.  I’ve seen culinary arts programs in junior high schools through the LAUSD program.  With the requisite funding from the federal government, the impact could be on a greater and more significant scale.”

“While in the Legislature, I passed the CRISES Act, first-in-the-nation state-level legislation to establish a pilot program to have community-based organizations serve as first responders instead of the police,” Kamlager said.  “I passed the most transformative probation reform legislation in the country, which now caps probation terms for most offenses at 1-2 years – reasonable limits that will help break the cycle of incarceration, reduce officers’ caseloads and save millions of dollars.  I served on the Penal Code Revision Committee to review the overwhelming number of laws on the books that work to over-monitor and over-punish, and have over-criminalized many in our communities. I also chaired the Select Committee on Incarcerated Women to uncover practices that disproportionately impact women and mothers - the fast growing prison population. I champion these issues because they make a difference in how we see successful rehabilitation and re-entry. They impact the social and economic fabric of our families and communities. It is important to note that many of these issues are also challenges at the federal level and, as such, will remain one of my key focuses if I make it to Washington.”

Reparations has been a national topic for several decades, and with California’s task force to study reparations, the topic should gain more traction on a national level.

“I look forward to having a national dialogue and to take testimony on the issue of reparations,” Perry said.  “We have many good models of what reparations can and should look like.  I think this has to be a dynamic discussion, debate, and vetting that takes place across the country.  So my stance is that I am in support of that.”

“I support reparations,” Kamlager said.  “Last year, my legislative package was centered in economic justice.  I believe we have an obligation to address how we have institutionalized systemic poverty and theft within communities of color.  This is evident in how we have historically treated indigenous communities, our Asian communities and the Black community.  Redlining, exclusionary covenants, the use of tax law and imminent domain to take Black land, under-appraising and predatory lending and development - all of these practices contributed to the state of Black economics today.  Reparations is an active redress and should be national legislation.”