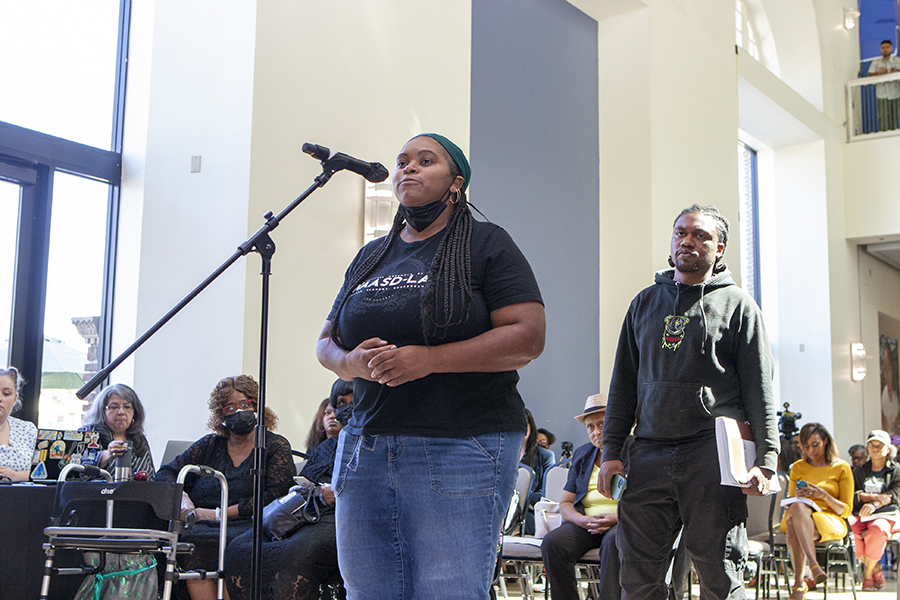 Community members spoke about the need for reparations during the public comment section of the meeting.

The task force created a 483-page report that explains in detail how slavery and segregation impact Africans Americans today, and discusses why reparations is needed to close the wealth gap.

California’s movement to secure reparations for Black people continues as the California Task Force to Study and Develop Reparation Proposals for African Americans is hosting public meetings in California.  This past September the task force held meetings in Los Angeles at the California Science Center in Exposition Park to discuss the work that is being done and what the next steps are.

The task force has produced a 483-page interim report on the impact that slavery, segregation, and the impact that racist policies have had on African Americans for centuries.

“It’s to document the wrongs that have been suffered by people who are descendants of slaves,” said California State Assemblymember Reggie Jones-Sawyer, who is a member of the task force. “That it is so pervasive that it affects every part of society to ensure that African Americans are impeded from being able to fully have success in American society.  If we’re talking about education, public safety, home ownership, wealth gap, redlining; everything that you can think of that American society has, there have been roadblocks that have been put in our way so that we stay a permanent lower class.  What slavery has done to us, what Jim Crow laws, what segregation did, this report outlines what it actually was.  We’re now in the process of developing strategies to reverse that.”

The task force did extensive research to put together a factual report.

“The bibliography and endnotes alone is pretty heavy because we wanted to back up every claim of wrongs that have been hoisted on African Americans, and we wanted to make sure that nobody, no matter how much that they did not want to give reparations, we did not want anybody to look at that document and say that it wasn’t true,” Jones-Sawyer said.  “Since it has been published I haven’t heard anybody say that none of the facts of what happened to the Africans who came here are not true.  Everything in that book is backed up with facts.  As far as an academic thesis, it’s probably one of the best written analyses of African American slavery, Jim Crow, and segregation that’s ever been put together.”

People who object to the idea of reparations tend to point out that slavery ended over 160 years ago, so Black people have had more than enough time to catch up.  But those people fail to see that Blacks were excluded from several government programs that allowed White Americans and immigrants from Europe to build wealth.

Home ownership has led to wealth for many Americans, and the property tax from homes helps fund public schools.  A community of home owners will have better schools to send their children to than a community of renters.  Since Black Americans were excluded from government programs to secure homeownership, many schools in predominately Black communities are under-funded.

“Reparations is not only for slavery,” said National Assembly of American Slavery Descendants Los Angeles spokenperson Chad Brown in an interview with the L.A. Standard in 2020.  “It is also for the ensuing institution of Jim Crow segregation.  That institution continued well into the 1960s.

“The government policies are selecting winners and losers.  But fundamentally you can draw a straight line back to all policies and marginalization of Black Americans in this country, right back to slavery and the immediate reconstruction period that followed institutionalized chattel slavery.”

The wealth gap between Black Americans and White Americans that is present today was created in the decades after slavery.

“A Black family has on average one-tenth of the wealth of a White family, and we’ve pretty much been here the whole time,” Brown said.  “Looking at the racial wealth gap, Black Americans are at the bottom of every measurable social economic indicator.  You look at healthcare outcomes, housing outcomes, wealth outcomes, income outcomes.  You can even look at income and wealth as it relates to education outcomes.  We’re at the bottom of all of those metrics.”

Reparations is typically viewed as cash payments to African Americans, but the task force is looking at several forms of repayment.

“It’s not just financial with money, and it’s not just an apology,” Jones-Sawyer said.  “We need to look at home ownership, the fact that we are enabled to buy homes.  We need to look at the prison population and the fact that we’re incarcerated more and at a higher rate than anybody else.  The fact that our education system keeps us in a permanent state of underclass citizenship.  We need to be able to reverse a lot of that in California.  That can be the benchmark for each of the other 49 states to follow, and hopefully what the federal government will ultimately do by creating a national reparations policy.”

While the New Deal of the 1930s brought White Americans out of poverty after the Great Depression, Jones-Sawyer does not label reparations as a “Black New Deal.”

“I look at it as reparations as a way to reverse the harms that were hoisted on African Americans more so than an economic catastrophe (Great Depression) that happened,” Jones-Sawyer said.  “This is something that America owes African Americans for the blood, the sweat, the toils that slaves endured to make this country great.  It’s more of repayment for all of that, where the New Deal was more about getting this country back on track after an economic catastrophe.”

The task force is working on the final report, which will be completed in June of 2023.  The task force will hold in-person meetings, which can be viewed virtually, in Oakland in December, in San Diego in January and in Sacramento in February.  People who are interested in the report can contact any of the members of the California Legislative Black Caucus for a hard copy of the report, or they can visit https://oag.ca.gov/ab3121/reports to read the report online.  For more information about the National Assembly of American Slavery Descendants Los Angeles, visit https://www.naasdla.org/