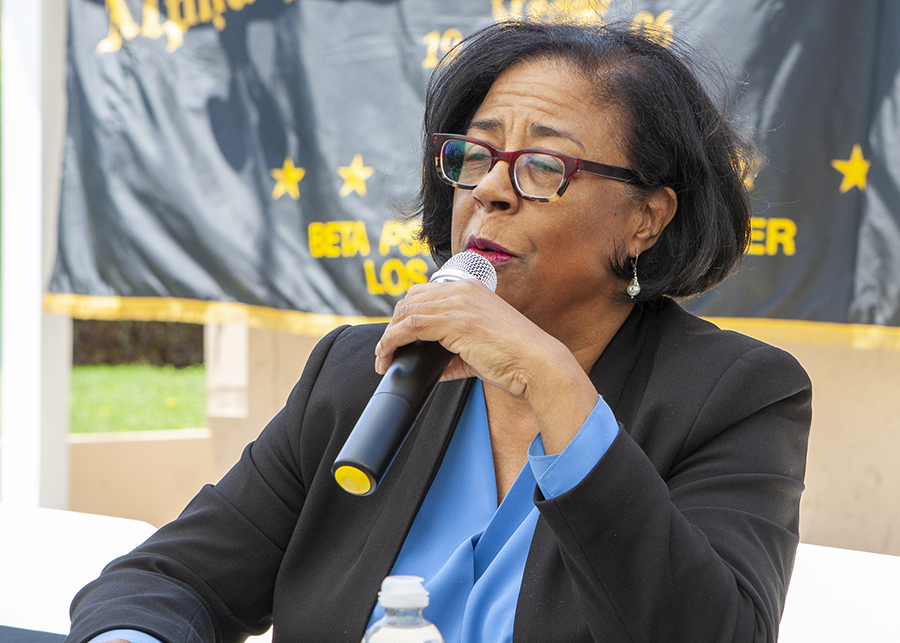 Jan Perry speaking at a political discussion at the L.A. Alpha House. Photos by Jason Lewis

Perry is running for Congress in November.  She plans to continue her efforts to combat the homelessness issue.

Jan Perry spent a considerable amount of her time in the Los Angeles City Council taking on the homelessness issue.  Perry was the 9th district councilmember from 2001 to 2013, and she plans to continue those efforts as the congressmember of California’s 37th congressional district, which is the seat that is currently held by Congresswoman Karen Bass.

Perry is running for the seat against California State Senator Sydney Kamlager in the November 8 election.

While working in the Los Angeles City Council, Perry served South Los Angeles and downtown, which are both impacted by the homelessness issue.

“I represented Skid Row for 12 years, and I placed an enormous amount of focus in Skid Row and South Los Angeles on the issue of homelessness,” she said.  “Even though African Americans are about 10 percent of the population in the county of Los Angeles, they were incredibly overrepresented in the population of the people who are homeless and unhoused by over 40 percent.  So this was always an issue that required my attention and my focus.”

Perry took a proactive role to help people because, as she said, the city of Los Angeles and the county of Los Angeles were not working well together.  That led her to create her own programs.  She established the largest year-round funded shelter on Broadway Boulevard and 38th Place, in a light industrial area.  At that location, a warehouse held 650 beds with support services on site.

“The support services gave law enforcement an alternative to 5151-ing (detaining people for mental disorder) folks and doing the 72-hour psychiatric lockup, and then putting them back out there on the street,” she said.  “People were able to stay there for up to a year and go into recovery, receive medial treatment, mental health services.  All of the things that they needed right there on site to prepare them to go into housing and to be able to successfully stay in that housing and thrive.  And that still exists.”

Perry worked with many non-profit housing developers to create space.

“Not only did I build out about 6,000 units of affordable housing in the Skid Row area, but also in the South L.A. area,” she said.  “South L.A. tended to have more families who were either at risk of being homeless, or actually were homeless.  So I focused on the major transportation corridors near schools, near places where people would have their family, and had an infrastructure in place for them to get around.  I worked with non-profit developers to arrange financing for many of these projects with the redevelopment agency, so we were able to use tax increment financing, and new market tax credits.  And at the time I worked with the general manager and deputy mayor of housing.”

Perry set up a trust fund that was funded by the city.  It gave non-profit housing developers a chance to compete for funding to subsidize the costs of the units that they built.

“It was a very successful program, which is why I got so many units done,” she said.  “And I think the main way that I got so many units done was because I worked collaboratively with people who actually knew what they were doing.  We were all dedicated.  Overall the mission was that homelessness is a public health crisis.  It’s also a housing crisis.”

Perry worked with the Midnight Mission in partnership with the LAPD, the Business Improvement District, and the Los Angeles Homelessness Authority.

“We did regular outreach for years to get people off of the street and into housing,” she said.  “We were able to get people into beds.”

Perry intends to take her experience with this issue to Congress, where she will be able to access federal funds.

“I built out my own continuum of care,” she said.  “I didn’t wait for anybody to do it for me.  I intend to take all of that experience and take it to scale as a congressperson in Washington, D.C.  I will work together with (federal agencies) Health and Human Services, Housing and Urban Development, and with the Economic Development Administration to create funding streams to be able to support the further development, growth, and expansion of a network, not just in the 37th district, but throughout the City of Los Angeles to create a more expeditious and straight forward approach to getting people off of the streets, into a bed, into treatment and recover, and to move them forward.”

For more information about Perry’s campaign and to find out her stance on affordable housing, land use, policy development, and social justice, visit www.janperry.com and follow her on social media.