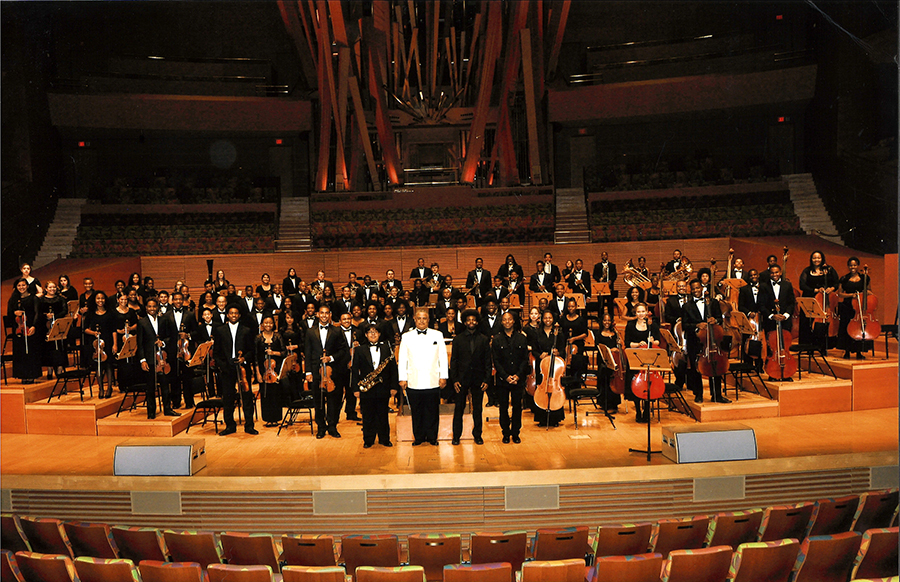 This free program gives young musicians of color a chance to play in a classical music orchestra in their own community.

The Inner City Youth Orchestra of Los Angeles (ICYOLA) has given many Black children from South Los Angeles, Inglewood, and the greater Los Angeles area a chance to play on some of the most prestigious stages in the world.

The ICYOLA, which is the largest majority African American classical music orchestra in the country, has a full season where they hold public and private performances throughout the year, and they have a season ending performance at the Walt Disney Concert Hall on a yearly basis.  This year they will perform there on July 7.

“This is a lifetime experience for the young people who go down there and play,” said Charles Dickerson, executive director and conductor of the ICYOLA.  “I believe that they would not have an opportunity to play at a place like the Disney Hall other than what they do with us.  Because there’s no other organization that I know of that caters to them and provides that type of opportunity.  To have our people dress up in tuxes, and play the highest quality of orchestra music that there is, and to stand up in front of their own community and say, ‘Here we are,’ that is the height of opportunity for the young people in our community.  It would be like a young athlete having the opportunity to play at Dodger Stadium or the Coliseum.  Those opportunities are few and far between.  So for us to take 100 kids from our community to Disney Hall, and let them play in one of the most iconic places in the world where orchestra music is played, and now they are the ones on stage, that does a lot for self pride and community pride.”

Win a signed copy of CONTACT HIGH: A Visual History of Hip-Hop! Free to enter.

The formation of the ICYOLA began in 2009, when nine young Black instrumentalists approached Dickerson about having a summer program.  Dickerson has been a choir director since he was 21 years old.  He was the Director of music at Holman United Methodist Church from 1996 to 2005, and over his 40 plus years of conducting, he has directed performances of many of the greatest orchestral and choral works throughout the United States, Europe, and Asia.

The group started rehearsing with Dickerson a few times a week in the West Adams area of Los Angeles.  At the end of the summer, the group had grown to 24 members, and they held a recital that was attended by about 150 people.

The group of young musicians wanted to continue playing after the summer ended, and they asked Dickerson to stay on as the conductor.  They moved their rehearsal location to Inglewood, and in 2011 they were invited to play at the dedication of the Dr. Martin Luther King Jr. Memorial in Washington D.C.  At this point Dickerson realized that for the group to continue playing on large stages, they had to become a 501c3 non-profit corporation so that they would be able to raise the funds to continue growing.

At that point the ICYOLA created its first season, which concluded with their first performance at the Walt Disney Concert Hall in 2012.  Throughout the year, the orchestra plays at galas, special events, and church concerts.

This orchestra is extremely important for Black children in the greater Los Angeles area because there are not very many organizations like this in their communities, and that is designed for them.

“There are a lot of youth orchestras, but most of them are not, in fact, none of them are in communities of color,” Dickerson said.  “If a Black young person wanted to join a youth orchestra aside from us, they’d have to travel a long way to do it.  There are some in the South Bay, or on the westside of town, but there’s nothing in the heart of their own community other than us.  We offer an opportunity for young people in our community to stay within the community and learn this art form.”

While the majority of the young musicians come from South Los Angeles and Inglewood, some come from Compton, Long Beach, and one student made the trip from Bakersfield to be a part of this orchestra.

The ICYOLA is a performance-based program, so many of the young musicians already have learned the basic skills of their instruments before they join the orchestra.  But they are also a non-competitive orchestra.

“If you join a youth orchestra elsewhere, generally you have to audition for it,” Dickerson said.  “If you make it, then you are assigned a seat, and you basically have to compete in order to move up from the seat that you are given.  We don’t operate like that at all.  Those who are more proficient teach those who are less proficient so that all ships rise.”

As the young students reach the highest levels of this musical art form, they are also seeing similar gains academically.

Dickerson also believes that the younger a child starts playing music, the better he or she will be.

The ICYOLA is a free program.  They are having their annual spring fundraising drive where they are seeking to raise $100,000 of their $400,000 annual budget.  Checks can be made out to the Inner City Youth Orchestra of Los Angeles, and mailed to their office at 6820 La Tijera Blvd., Suite 201, Los Angeles, CA 90045.  Donations can also be made through their website at www.icyola.org.  Their season schedule and information about joining the orchestra can be found there.  They can be reached at (213) 788-4260, and follow them on social media.