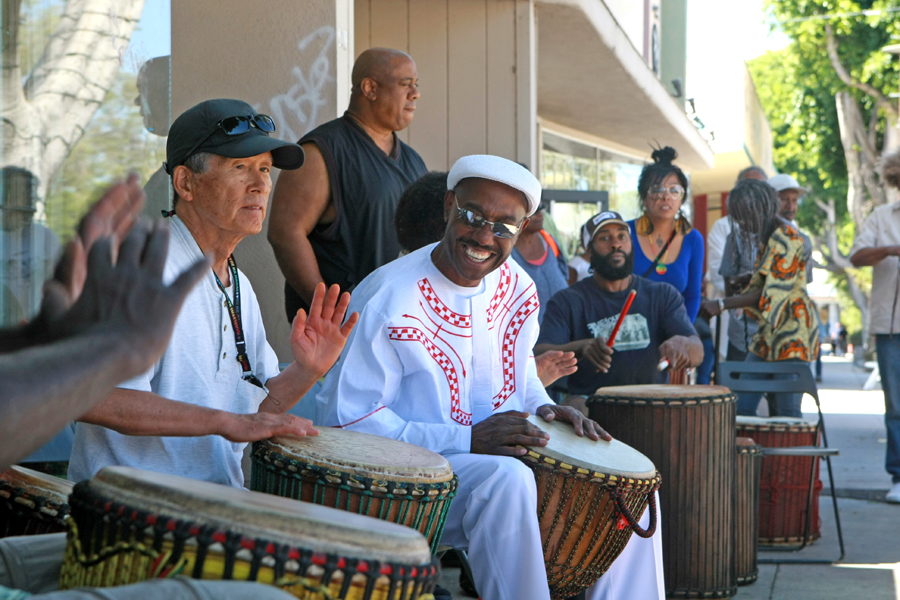 Drum performances - some planned, some impromptu - occur on Degnan Blvd. and in the park. Photos by Jason Lewis

Walking from one end of Degnan Blvd. in Leimert Park Village to the other at a recent art walk, which is held on the final Sunday of each month, a person would start off hearing the sounds of an African drum circle in the park.

Heading north toward 43rd St., the drum sounds faded as the reggae music picked up near the Vision Theater.

Half a block up the street, the sound starts to change to a R&B singer who is performing on a stage in front of the We Can Foundation, and music can be heard coming out of The World Stage.  In the same building, Barbara Morrison has a group of children playing jazz at the recently opened California Jazz and Blues Museum.

Directly across the street in the Vision Theater’s parking lot, Fernando Pullum is conducting a group of kids as they play the blues in front of a audience at a Jazz Appreciation Month event.

From one end of the street to the other, musicians of different skill levels are expressing themselves through various forms of black music.

“If you put walls up, it would be a conservatory (of music),” Morrison said.  “But because we don’t have that type of facility, it’s an open-air conservatory.”

Visitors to the Leimert Park Village are treated to music from different regions of the United States and from around the world, and also from different time periods.

“If this was in New Orleans, Leimert Park would be like a filé gumbo, with everybody coming together,” said Clarence Eziokwu Washington, vice president of the We Can Foundation.  “It’s like a delicious blend of music.”

The various genres of music within this confined area allows musicians to feed off each other, and new sounds are created.

“People learn from each other,” Morrison said.  “There’s a camaraderie that we have with the music in this area.  It’s like one big, ‘hey, I like that, lets go over here where they’re doing R&B because we can use that African drum from Senegal.’  Or there’s some Charlie Parker and Miles Davis over there.  I think that’s where the wonder comes from.  Where the greatness comes from.  People are picking up all of these sounds and putting them together to make a piece of art.”

Professional musicians who perform at the largest and most historic venues in Los Angeles are drawn to the vibes of Leimert Park.

“I go there for therapy,” Pullum said.  “There’s going to be something that puts a smile on your face there.  The energy is just so high and positive.  I played with Ella Fitzgerald at the Hollywood Bowl one time, and the energy was surging through my body.  I had my tuxedo on, and there was no way that I could lay down.  I had played with Anita Baker earlier that day.  The place I ended up at afterward was Leimert Park.  I could just stand there and just absorb all of the other music.  Every time I played a big gig, I’d end up in Leimert Park afterward.”

Many of the musicians swing by The Barbara Morrison Performing Arts Center, where they can hear and play with jazz and blues legends.  The venue gives creative artists a place to express themselves.  The center’s event schedule is filled with concerts, jam sessions, and music classes for adults and children.

Leimert Park has a long history of cultivating musical talent, whether it be from people who are breaking into the profession or amateurs who simply love to perform with others.

“Anyone is free to express themselves no matter what level that they play on,” Pullum said.  “It can be horrible, and they can still jam.  Nobody judges you in Leimert Park.  It just feels like an oasis of positive energy.”

Pullum founded the Fernando Pullum Community Arts Center, where he leads a program that instructs roughly 650 children in jazz band, beginning instruments, drums, guitar, piano, choir, and music recording.  Pullum saw the rich musical tradition in Leimert Park, which is one of the reasons why he brought his arts center to this area.

“What I saw in Leimert Park, and the reason I brought the kids here in the first place, I saw this gap,” Pullum said.  “I saw a bunch of older musicians playing, but my students didn’t know about Leimert Park.  I figured that the legacy needs to be able to continue, and the only way to do that is through young people.  I brought my kids over here so that they could keep that tradition alive.”

The Barbara Morrison Performing Arts Center also has a youth program through their partnership with the Harmony Project.

Learning to play music is not only for youth.  At the World Stage, which was founded by legendary jazz drummer Billy Higgins, there are classes for various types of drumming, wind instruments, vocals, and music writing.

The World Stage also features jam sessions throughout the week.

“The people that come here are unique,” said Matt Gibson, a volunteer at the World Stage.  “All sorts of jazz musicians from the very most rank amateurs all the way to the top professionals come to the World Stage.  That’s a rare meeting place.  Totally multicultural.  Everybody is always welcome.  Because that was the spirit of Billy Higgins.  When Billy was living, he was a very nice and welcoming man.  He would bring you in and get you playing some music.  That spirit still holds very strong here.”

Jam sessions at The World Stage usually begin at 9 p.m. and can go as late as 1 a.m.  There is a rhythm section on hand to provide music so that all musicians can participate.

While The World Stage and the Barbara Morrison Performance Arts Theater focus more on jazz and blues, the We Can Foundation features more modern music.

“Leimert Park has always had a base for jazz, blues, and drumming,” Washington said.  “I support all three.  When we do our art walk, I usually bring in the newer form of entertainment.  The R&B/hip hop blend.”

Washington sets up a stage in front of the We Can Foundation on Degnan Blvd. during festivals and art walks, and he gives younger artists a platform to introduce their music to the community.  This stage is open to anybody who wants to perform, as long as the lyrics do not have profanity, and Washington encourages young artist to have a positive message.

While a lot of the music in Leimert Park is put together by one of the preforming arts center, many impromptu performances are held up and down the street.

“We have a ton of drummers down there in the park and along the street,” Morrison said.

With all of this great music being performed, it is important to document it for historical purposes.  Morrison has taken on that task by opening the California Jazz and Blues Museum.

Many of the musicians featured at the museum have performed in Los Angeles for decades, and the museum showcases how they had an impact on today’s music.

There is a wide range of music on a daily and nightly basis in Leimert Park, with a number of festivals on weekends throughout the year.  For more information on the musical activities in the village, visit www.leimertparkvillage.org and find them on Facebook.

Contact the Barbara Morrison Performance Arts Center at (323) 350-1962 or www.barbaramorrisonpac.com. 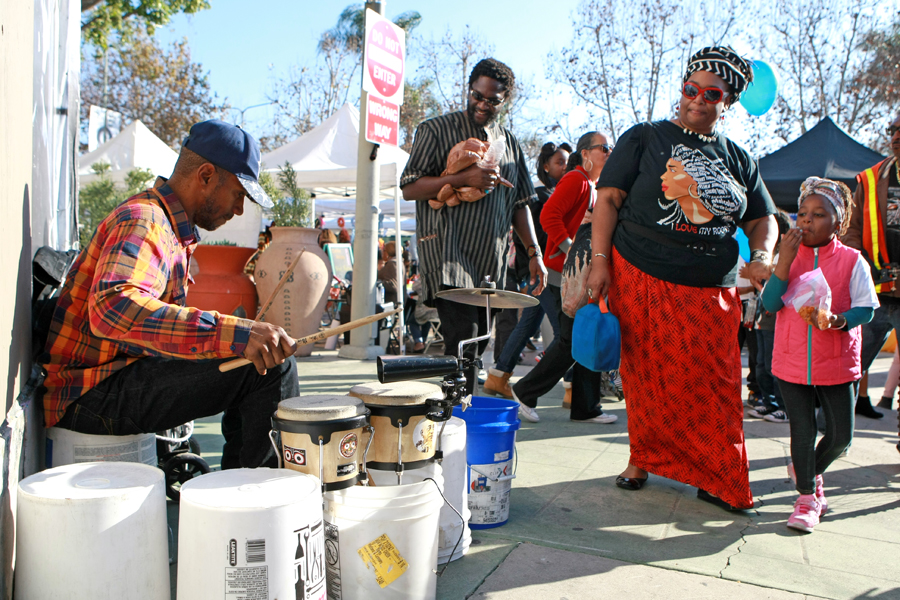