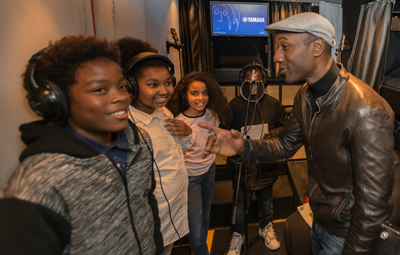 Performing arts can have a positive impact on children’s lives.  A study from the Arts Education Partnership shows that children exposed to drama, music and dance may do a better job at mastering reading, writing, and math than students who focus solely on academics.  Performing arts can also give students an alternative to gangs.

“The arts saved my life,” said Fernando Pullum, founder of the Fernando Pullum Community Arts Center.  “I wanted to be able to give the same opportunities to kids who were just like me.”

Pullum grew up in Chicago.  Both of his parents were drug addicts, and he was raised by his great grandmother.  Despite his difficult childhood, music kept him off of the streets and launched a life-long career.  After moving to Los Angeles in 1984, he became the music director at Washington Prep High School.  Under his guidance, the school’s music department received numerous awards.

Pullum does not simply select the most talented children for this program.  Classes are open to beginners with no experience to advanced students.

“We have skilled kids, and we have kids who have never done anything at all,” he said.  “We don’t care if they’ve done anything.  And we’re not cherry picking.  I want the kid who needs inspiration.   I want the kids that are struggling, and need a glimmer of hope, and some direction.”

This performing arts center is extremely important because many programs similar to this one within the public school district have been eliminated due to budget cuts.  And the programs that have been maintained are under-funded.

“Unfortunately, the arts get cut out of a lot of schools in the area,” Pullum said.  “Or the teacher has inadequate (resources).  Sometimes an instrumental music teacher might have to do that and choir.  I’m an instrumentalist, but I cannot sing.  Or the choir teacher has gotten saddled with teaching the band class, and asking me how to make a sound on the trumpet.  The instruction at schools is not always the best.”

Public schools also have a shortage of instruments, which can cost upwards of $1,000 each.

Pullum has seen children make great improvements outside of the arts after entering the program.

“I see some kids become more focused on their academics, because they can’t play with us if they don’t have their act together,” he said.

There is an understanding that not everybody is going to become star.

“I believe that a round of applause is just as addicting as any drug out on the streets.”

The element that Pullum is referring to is the illegal activity that occurs in many inner city communities.  But his program fills a void that many children are looking for.

“This is an alternative to gangs because this is an activity, and it’s a great activity,” Pullum said.  “A lot of gang members, they just want to be in something.  They want a family.  When you’re in a band, or in a cast, you’re extremely close to those folks.”

Surrounding the children with positive adult role models is also a key to their success.

“If all you see is a drug dealer or a pimp, that’s all you’re going to aspire to be,” Pullum said.  “If you can see something else, than you’ll aspire to be that because it becomes a possibility.”

Pullum has surrounded the students with many celebrity artists, including Stevie Wonder and George Clinton.  Recently soul artist Aloe Blacc visited the performing arts center to participate in a jam session on board the John Lennon Educational Tour Bus.  The bus features a state of the art recording studio, and Blacc assisted the children in recording songs.

“Artists traditionally are givers,” Pullum said.  “Because somebody gave to them.  You can’t be this great artist without somebody shaping and directing where you go.”