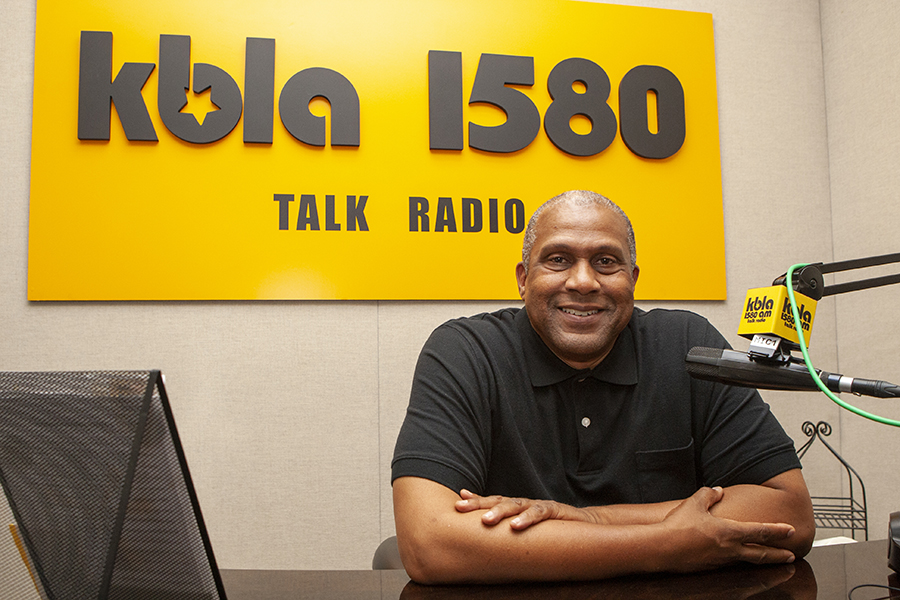 Smiley is back on the air as he’s brought an amazing lineup which includes Dominique DiPrima, DL Hugley, and Melina Abdullah to speak about Black political and social issues.

The launch of KBLA Talk 1580 on the AM dial brings the first Black-owned talk radio station to Los Angeles.  Tavis Smiley makes his media return as the owner of a radio station that is unapologetically progressive.

“But to be clear we are unapologetically Black,” he said.

Nationally, White conservatives have historically dominated political talk radio, and that is true even in a city as progressive and diverse as Los Angeles.

“How is it that in a city that is this multi-cultural, multi-racial, multi-ethnic, we have never had a talk station that is Black owned, or that is geared toward Black people and people of color?” Smiley said.  “I started my career on KABC talk radio.  The problem with talk radio in this city and across the country, the lineup on talk radio is all day, all night, all White.  We have to change that.”

“If you look at radio, it is controlled and owned by conservative White people; older White people nationwide,” she said.  “Thousands of stations.  And not only is that a drag because we don’t have access, it’s a drag because they impact elections.  They shape opinions about candidates, about issues.”

“It’s really different when you own it, because you don’t have to ask permission to tell your story,” she said.  “Many of us have worked for mainstream media at some point, or tried to pitch a story somewhere and you were told that it was a little too Black, or it doesn’t appeal to (a mainstream audience).  We didn’t have the decision-making power.  And that’s the difference with Black ownership.  You walk in, you pitch a story from your perspective, and it’s not alien to the person you’re pitching it too.”

DiPrima also pointed out that it’s important for Black people to talk about Black topics and create Black content.

“Black Lives Matter opened up the doors for a lot of people, and Dr. Martin Luther King Jr. opened up the doors before that,” she said.  “So talking about right now, we’re trendy.  We’re in.  But I think it’s really easy for other people to try to duplicate or hire other people to do us.  It’s funny that I’ve had a couple guests come in, and I see them looking around for the White person that’s really writing everything; that really owns everything.”

KBLA Talk 1580 is a place where local Black politicians can speak to Black people who live in communities that the politicians serve, and they can speak about issues that impact black people.  Before KBLA Talk 1580, there was not a talk radio station in Los Angeles where they could do that.  Recently DiPrima interviewed Los Angeles County Supervisor Holly Mitchell, whose district includes South Los Angeles and Inglewood.

“Holly doesn’t have to run nowhere else begging for airtime,” Smiley said.  “She can be her authentic self, and she knows that this can be a home for her.  Whenever there is something that the community needs to know about, you now have a platform.”

“Why hasn’t anybody stepped up to give Black Lives Matter their own program?” Smiley said.  “They need a weekly platform to express themselves and give us updates and marching orders of what we ought to be doing.”

Abdullah has made guest appearances on many television and radio shows.  She said that she’s in demand when Black issues become topical, but her airtime greatly diminishes when news media moves on to other stories.

“FOX L.A. decided at the height of the uprising that they wanted me on once a week,” she said.  “And then when the uprising began to fade, they said that Black Lives Matter doesn’t have anything more to say.  I didn’t realize what a difference it would make being a part of the KBLA family that does have a politic; that does have a basic ethic of Black people having to be able to speak from our own perspective and in our own voice.”

One of several reasons why Smiley launched this station is to keep Black topics in the news.

“They’re (mainstream media) covering us now because we’re in the streets,” he said.  “We’re raising hell.  But what happens when we’re not in the streets anymore?  And what happens when all the good White folks and all the Hispanics, and all the Asians, and everybody else who came to the streets with us, disappear?  How do we continue to advance our narrative?  Because it’s sad to say, but they ain’t going to stop killing us.  And it’s a tragedy if we have to run to the streets every time one of us gets killed by the cops.  We have to raise our voices, and I decided then that we have to have our own platform.”

“If you were to ask me the thing that’s most surprising about the last 30 days, it is that this app is being downloaded like fire all across the country,” Smiley said.  If you listen to our station, we’re getting calls from Atlanta, Chicago, Washington, New York, Europe.”

The success of this station, which is owned by Smiley Audio Media, will lead to the purchase of radio stations around the nation.

“The larger plan is to build a a Black talk radio network across the country,” Smiley said.  We’ve already identified other stations that we want to buy.”

Smiley purchased KBLA Talk 1580 for over $7.5 million, with about $1.5 million coming out of his own pocket.  While he was able to finance a large portion of the sale, he also received financial support from rapper Ice Cube, political commentator Van Jones, political comedian Bill Maher, NBA player Mike Conley, and Faithful Central Bible Church in Inglewood pastor Kenneth Ulmer.

The massive investment should pay off, as nearly $650 million in advertising is spent every year in Los Angeles radio.

KBLA Talk 1580 has a very impressive lineup, with DiPrima’s show leading off at 6 A.M., followed by Smiley’s show at 9 A.M.  Middays with Danny Morrison comes on at noon, the DL Hughley Afternoon Show at 2 P.M., Alonzo Bodden: Who’s Paying Attention at 4 P.M., Let’s Get Intimate with Dr. Jeshana Johnson at 7 P.M., and Don Amiche vs. Everybody + Crysta & Kiara at 9 P.M.  Black Lives Matter This is Not a Drill airs Saturday mornings at 8 A.M. and the Best of State of the Black Union throughout the weekend.

For more information about KBLA talk 1580, visit www.kbla1580.com and follow them on social media.